Authored by Irina Slav via OilPrice.com,

The Japanese Nuclear Regulator Authority has given its initial approval to Tepco to start releasing irradiated water from the Fukushima plant that collapsed during a massive earthquake and tsunami in 2011.

Plans were revealed last year to pour the water from Fukushima into the sea after an assessment that would check whether there were any safety issues with such a plan. According to the Nuclear Regulator Authority, there are none. Final approval will be granted in a month after the public has had the opportunity to comment on the issue.

The UN’s International Atomic Energy Agency will also carry out safety reviews of the water release.

There are about a million tons of contaminated water from Fukushima that Tepco, the operator of the nuclear plant, has been looking for ways to dispose of for several years now.

Releasing the water into the ocean has emerged as the most viable solution to the problem despite opposition both from inside Japan and its neighbors. 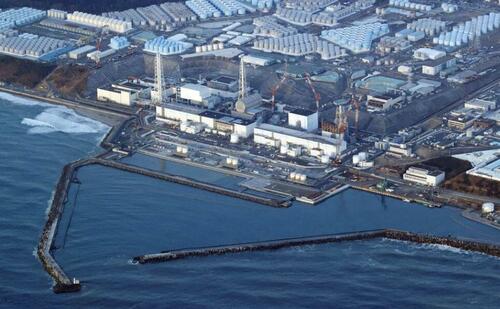 Despite the absence of viable options, environmental groups and fishing industry organizations are against the release of the liquid into the sea, even with assurances from scientists that the risk of contamination is low.

The water will be first filtered and then diluted to reduce the concentration of radioactive material 40 times, according to some of the reports from last year that were confirmed this year as well. The release is scheduled to begin this year if the Nuclear Regulator Authority gives its final go-ahead to Tepco.

Back in 2018, official calculations by the Nuclear Damage Compensation and Decommissioning Facilitation Corp pegged the cost of decommissioning the Fukushima nuclear power plant at some $75 billion, which was a sum four times larger than the initial estimate of how much it would cost to put Fukushima out of commission.