Pouring more fuel on what was already today’s dumpster fire of a market, Bloomberg reported that according to a memo it had seen, Jefferies told clients its prime brokerage arm will no longer allow the execution of short sells in meme stocks such as AMC, GameStop and MicroVision.

“Until further notice, Jefferies Prime Brokerage will no longer offer custody on naked options in GME, AMC and MVIS,” the memo noted. The firm will no longer allow the execution of short sells of those securities, the memo continued, noting that other stocks may be added to that list.

The news comes in a rollercoaster session for AMC which after plunging as much as 30% on news it was selling 11.55MM shares in an At The Market offering, reversed all losses after announcing it had completed the offering, gaining as much as 10% before again reversing the move and last seen down about 9% at $57. Expect much more drama here. 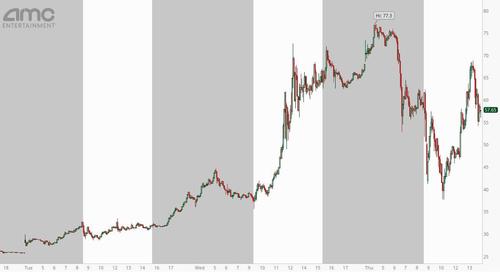