JEOPARDY! host Ken Jennings was as shocked as fans at home when the reigning champ won Tuesday’s game in a wild way.

His bold bet in the final round made for perhaps the most nail-biting episode of Season 39 yet.

The show has a live studio audience again, and he and actress Mayim Bialik have been officially announced as the permanent replacements for the late, great Alex Trebek.

The stage is indeed set for excitement, and September 20th’s match delivered.

Now-3-day champ Emmett Stanton, a freelance writer from Baltimore, won the match with $30K and $72K total, but it was no runaway. 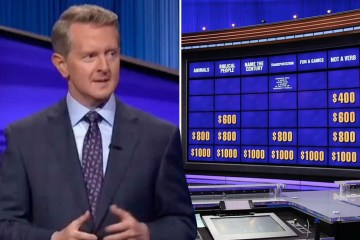 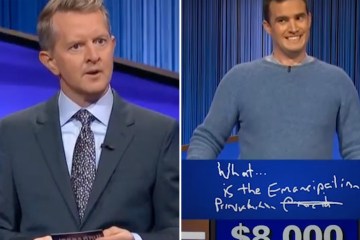 He faced Juliana Marmon – a pediatrician from Concord, Massachusetts – and Kelly Shannon-Henderson – a classics professor from Cincinnati, Ohio.

The returning champ trailed most of the intensely close game – and Ken was aware of as much.

At one point, Emmett got a clue that asked for one word applying to both “A burrowing insectivore and a Mexican cooking sauce.”

When he got it correct with “What is: Mole´” Ken dished out a joke since at the time Emmett was in the negatives.

“Correct, and that gets you out of the hole, or hole´” he quite humorously ad-libbed.

Going into Final Jeopardy, Emmett was still not in the lead, however.

The reigning champ was the only one to get it right, with “What… is the State of the Union Address?”

“Yes,” Ken said as it was revealed. “President Washington’s first address to congress. What will that do to his score?”

“Hello, big wager!” Ken said with shock, and with that Emmett pulled it off.

One Reddit user exclaimed as it aired: “Nail biter!”

“Yet another big bet going against the conventional betting strategies.

“That might come back to bite him one of these days but so far he’s been getting Final Jeopardy right so that’s good hehe.”

A third wrote: “VERY well done Emmett! 3/3 on Final Jeopardy [so far] and all 3 times were comeback wins.”

And a fourth on Ken’s saucy pun: “Damn, that holé joke was sublime.”