JEOPARDY! fans have slammed the show’s latest reigning champ over his odd answer about a well-known pop star during Thursday’s show.

Cris Pannullo appeared uncertain of the name of a 28-time Grammy winner but managed to come out with the correct answer.

During the game, Cris opted to answer a question under the musical alter egos category.

The question was: “for a 2008 album this singer declared ‘I am Sasha Fierce’ a more outgoing stage personality.”

He was quick to respond, beating his competitors by a mile.

While Cris appeared to know the answer, he struggled initially to get it all out, saying: “Who is Knowles? Beyonce Knowles.” 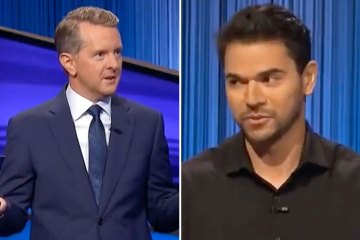 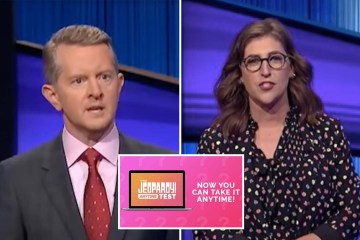 Fans got a kick out of the mishap, taking to Twitter within minutes to react.

“Cris just referred to Beyonce only as ‘Knowles’ in an answer on Jeopardy. That is a #supernerd move. No one refers to her as ‘Knowles.’ Even Ken Jennings seemed taken aback. I salute you, Cris! Nerd on & win!” one fan wrote.

Another user wrote: “Answering ‘who is Knowles’ for Beyoncé is the last way I think anyone is gonna respond on #Jeopardy but you learn a new thing every day I mean he’s right but who calls Bey by her last name in that instance or ever?!”

“Who has ever called Beyonce ‘Knowles’?” a third critic tweeted.

“Beyonce was the question for an answer on Jeopardy – the contestant said ‘Who is *Knowles*?’ I’ve NEVER heard anyone reference her that way…,” someone else added.

After Cris won his fourth game earlier this week, fans deemed him more of a threat than previous champs.

The returning champ faced off against Francis Gomes – a quality assurance technologist from Ontario, Canada – and Tory Martin, a communications and fundraising director from Grand Rapids, Michigan.

Cris, a customer success operations manager from Ocean City, New Jersey – who earlier revealed his professional poker past – has been dominating since he first arrived on the show last Friday.

Because of his humungous lead, the typically game-swaying last round didn’t matter much – which is why fans are buzzing about him.

Final Jeopardy read: “The 1948 edition of this publication said, ‘There will be a day…in the near future when this guide will not have to be published'”

The correct response was “Green Book” which was turned into an Oscar-winning movie.

Only Tory got it, but the book was already closed by that point.

He had what’s called a runaway game, meaning no other player had more than half of his score going into Final Jeopardy – so if he didn’t wager anything over $12999 – which he did not – he’d win, which he did.

One fan noted that’s actually been the case with every single one of Cris’ games thus far.

He’s had four runaways on the show – a wide enough lead to have already won before Final Jeopardy, per Daily Box Scores.

The viewer wrote on YouTube: “Fun fact: In James Holzhauer and Amy Schneider’s first five games, [only] four of those were runaways.”

“What this means is Cris Pannullo is technically even more unstoppable than James [and] Amy in his first four games,” they claimed.

“[And] If Cris pulls a runaway off tomorrow, he’ll make history for his first 5 games being runaways.”