A CLIP showing Joe Biden saying it “wouldn’t matter” if Haiti sunk has resurfaced following the assassination of its President Jovenel Moïse.

The snippet taken was from a wider discussion about US military action abroad and comes as the world is awaiting to see how the White House will respond as chaos unfolds in the Caribbean.

Read our Haiti President assassination blog for the latest updates

President Moïse was gunned down in his home by “well trained” foreign “commandos” – and his death is feared to spark more chaos in the already unstable nation.

It has already been suggested that the US could have to put boots on the ground should the situation deteriorate further – following previous interventions in 1994 and 2004.

And as people attempt to work out what President Biden will do next – many are pointing to this clip of him speaking days before the US strike in the 90s.

Biden – then a US Senator – was speaking to TV host Charlie Rose alongside Congressman Michael Castle as they weighed up the idea of military action by President Bill Clinton.

Haiti’s president had been ousted three year prior by a military coup and was being ruled by dictator Raoul Cedras, who saw more than 3,000 people killed by his brutal regime.

The clip was taken as Rose asked both men whether they would give Clinton the power to invade – and was filmed just one week before the US launched Operation Uphold Democracy and sent 25,000 troops in Haiti.

Comparing the situation to Bosnia – which Biden considered a more pressing concern for the US – the Democrat gave a slightly crass assessment of Haiti’s significance to the US.

“If Haiti, a God awful thing to say, if Haiti just quietly sunk into the Caribbean or rose up 300 feet, it wouldn’t matter a whole lot in terms of our interest,” he said.

Biden considered Bosnia a much more pressing situation as he considered it a powder keg which could spark a larger regional war and potentially involve nuclear weapons.

Rep Castle meanwhile explained he believes the US’s different policies on intervention may down to it working out how to establish itself as “the superpower” following the collapse of the Soviet Union.

Elsewhere in the show, Biden and Castle also had a racially charged discussion about Haiti.

President Jovenel Moïse was gunned down at his home[/caption]

The now-president said his apparent disinterest was not due to its predominantly black population, but then implied the only reason for military action in Haiti was “politics”.

“There’s a different political dynamic here, and that is that there is a large constituency in America that is saying, ‘Hey wait a minute. Is the reason you’re not paying attention over there because those folks are black folks?’,” he said.

The 27-year-old clip is being widely circulated on social media amid the unfolding turmoil in Haiti – with questions over what the US, if anything, may do to help stabilize the chaos.

Biden seems to be taking a larger interest in Haiti than he did three decades ago, describing the situation as “very worrisome“.

He tweeted: “We are shocked and saddened to hear of the horrific assassination of President Jovenel Moïse and the attack on First Lady Martine Moïse of Haiti.

“We condemn this heinous act — and stand ready to assist as we continue to work for a safe and secure Haiti.”

And meanwhile, his predecessor Donald Trump is reported to have previously branded Haiti a “sh*thole” country during a meeting with senators at the White House

US troops during the 1994 occupation of Haiti[/caption]

Moïse was allegedly killed by a group of “mercenaries” posing as US drug enforcement agents who stormed his presidential compound in Port-au-Prince.

The motive behind his assassination remains unclear – but it comes after ongoing political turmoil, accusations he was trying to become a dictator, and an attempted coup in February.

Decades of unrest have already plagued Haiti – with street violence, the rise of powerful and brutal gangs, mass protests and a slow collapse of a weak, corrupt police force.

And to further complicate things the temporary president is supposed to be the nation’s Chief Justice, René Sylvestre – but he died last month of Covid.

With no one in charge – and various factions vying for power – the threat of mass civil unrest or potentially even civil war, hangs over Haiti. 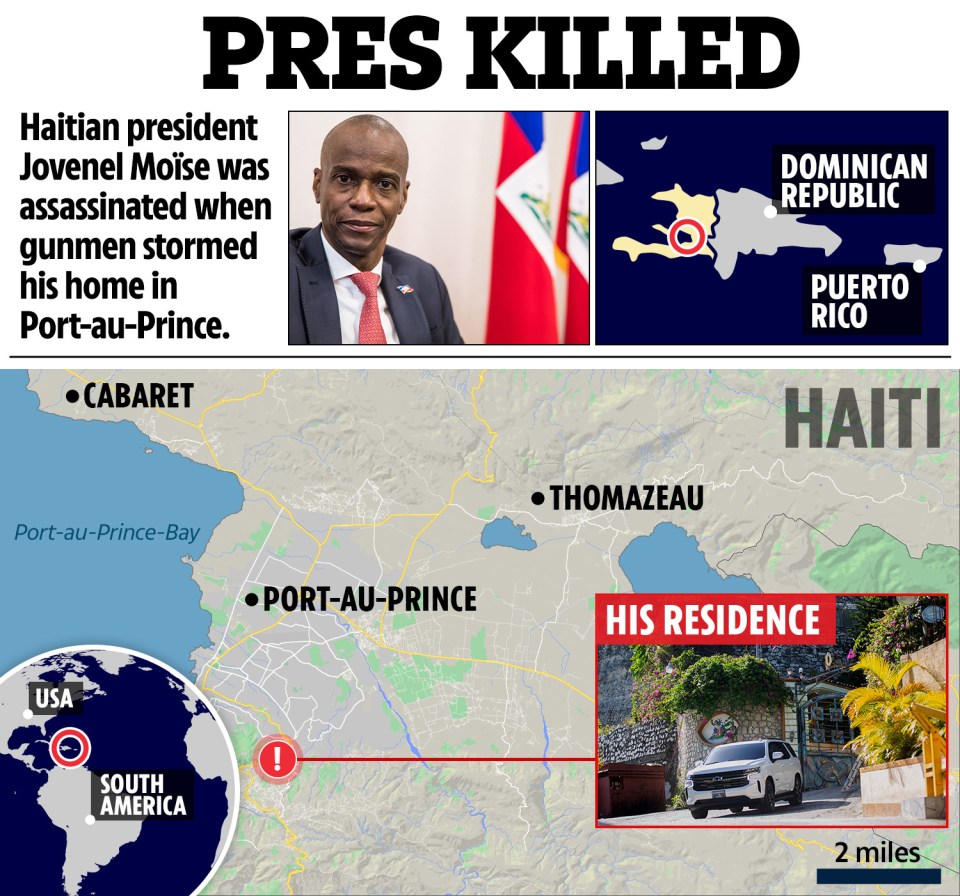 HAITI has suffered cycles of invasion, violence and repression since it first became independent in 1804.

1492 – Spain colonises the island of Hispaniola after the arrival of Christopher Columbus.

1697 – Spain cedes half the island to France, which eventually becomes the foundation of modern day Haiti

1804 – Haiti becomes independent under former slave Jean-Jacques Dessalines – he is assassinated in 1806.

1994 – The US invade and occupy Haiti as Aristide returns, with his protégé Rene Preval elected president

1999 – Aristide is elected again despite a disputed election

2010 – Catastrophic earthquake kills up to 300,000 people – leading to mass devastation and outbreaks of cholera

Professor Robert Fatton, who has written several books on Haiti’s turbulent history, grimly said the situation is likely to “degenerate” and the country to be “plunged into chaos”.

And he said there could another military intervention as has previously been seen in the last few decades from France and the US with the backing of the United Nations.

Speaking to France24. Professor Fatton said: “I assume foreign powers will be very worried about this situation in Haiti, in particular the United States.

“And as we know in the previous 20 or 30 years, the UN and United States – and actually France – have sent troops to Haiti because of political uncertainty and instability.”

NOT SO BABY BARRON


Barron, 16, looks all grown up as he leaves Trump Tower with Melania

However, he went on that Haitians may push back against such an operation as many actually blame the US and other foreign powers for their current troubles.

In a statement today, the U.S Embassy in Haiti said that it would be closed to due to an “ongoing security situation”.

Moïse had been ruling by decree for the last months, but he had originally been hoped to bring stability to the island – being a businessman with no political background, often dubbed “Banana Man”.

However, he found himself embroiled in political corruption as protesters urged him to resign as the nation failed to hold elections, branding him a “dictator”.