JPM’s Kolanovic: Stop Freaking Out About The Delta Case Spike

Two weeks ago, when markets were merrily melting up without a worry in the world, and certainly were not paying attention to the recent spike in Delta cases, we showed that unlike in 2020 when covid hospitalizations and deaths promptly followed – with a slight lag – any move higher in new covid cases, now that vast swaths of the population have been vaccinated, there has been a clear decoupling between new cases on one hand, and hospitalizations and fatalities on the other especially since those most at risk from the Chinese virus are protected.

new covid cases have decoupled from hospitalizations and deaths pic.twitter.com/sRbiRBx0tc

Fast forward to today when the markets are officially freaking out, with the propaganda out in full force…

… as we get a full-blown rerun of the 2020 narrative, as the Delta variant is now being spun as an entirely new disease and it’s only a matter of time before the “trusted messengers” tell those vaccinated that even they have little to no protection against the resurging cases, leading to yet another full blown lockdown and trillions more in stimmies.

Yet while infections may indeed be rising, Fauci purposefully refused to address the real elephant in the room: is there a concurrent surge in hospitalizations and/or deaths: after all, it those that matter – especially if the Delta variant results in a much weaker form of covid as many have speculated – and not the cases outright.

This goes straight to the point we made in our chart above. It’s also what JPMorgan’s Kolanovic writes in the latest weekly edition of the JPMorgan View. But first, a reminder that at the end of June, JPM’s Croatian quant tried to explain why “the Delta Variant does not pose a risk for markets.” Clearly that “explanation” has so far failed rather miserable to sooth market nerves which today is crumbling, but worse for Marko, is hammering his favorite value and cyclical stocks which the quant has been so bullish on for the past 6 months.

So what does Kolanovic say today? More of the same, it appears, because in yet another pitch for the reopening/reflation trade (similar to Goldman earlier), he writes that “reopening plays already discount lower levels of mobility and should regain leadership in 2H21”, which of course he would say after spending all of the first half making just that argument while bashing the very tech and growth names which have outperformed dramatically in recent weeks.

He goes on: “We think reopening plays could start to do better again, after losing ground in both the US and Europe the last 3 months, supported by above-trend 2H growth and strong consumer fundamentals.”

He then shift straight to sell mode, claiming that “Investor nervousness is high at present over the Delta variant and how policymakers will deal with it, but this might end up an opportunity to add to the reopening theme again. Within the JPM call of
above-trend growth in 2H and beyond, the consumer plays a central role. It sports strong balance sheets with elevated savings rates, positive wealth effects and crucially, labor markets are continuing to improve.”

Where Kolanovic has it wrong is that while the consumer indeed plays a central role, let’s remember that those benefiting from elevated savings rates are just a small fraction of the top 10% of society. The majority of the 90% have already spent their stimmies; as for the 1%, it is they that have mostly benefited from the $2.5 trillion in excess savings as the recent space race between billionaires Branson and Bezos so vividly demonstrates.

Where we do agree with Kolanovic, however, is where he repeats what we said two weeks ago with the chart shown at the top of this post, namely that the “Delta variant is a key risk to the call, but encouragingly the link between the case count and hospitalizations/deaths in the UK and other countries has weakened meaningfully (Figure 1).” In short cases and hospitalizations have decoupled… just as we showed they have even if the government’s propaganda spin masters refuse to acknowledge. 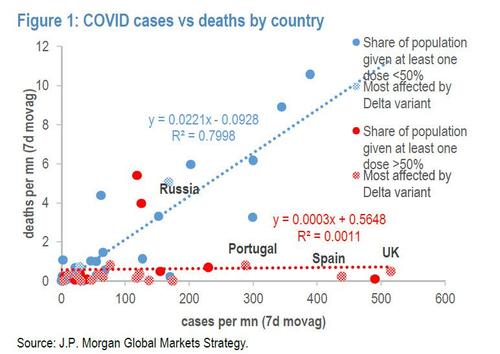 Kolanovic then suggests that “policymakers might end up adopting a different approach to tackling the pandemic, rather than reverting to strict mobility restrictions” although such a different approach would make the release of a new round of stimmies much more challenging. And by now everyone knows that the current covid freakout is all about how to usher in another trillion (or more) in fiscal stimulus.

The JPM quant concludes with a reco Hail Mary, saying that “even if the restrictions return, this might not be much of a surprise to the market, as reopening plays have lagged significantly, in effect already discounting lower levels of mobility. Finally, the earnings hurdle rate is far from demanding, where consensus projects that consumer reopening plays’ ’22 EPS will still be as much as 30% below pre-COVID- 19 levels, in contrast to the broader market that should be ahead by 15%”

Here, all we can say is that any “market-moving magic” Marko may have once had appears long gone: not only does the market disagree with Kolanovic that the “delta variant does not pose a risk” as today’s rout confirms, but his beloved value/reopening/cyclical sectors  have gotten hammered in recent weeks. And despite his best efforts to ease nerves that Delta is overblown and that reopening trades will recover, much pain has to pass first because one doesn’t just ram through another round of stimmies if the S&P is just 3% below its all time highs, a fact Biden, Powell and Yellen know all too well…