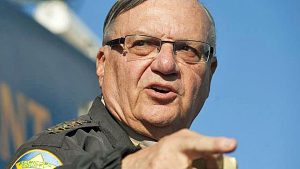 Maricopa County Sheriff Joe Arpaio announces a newly launched program aimed at providing security around schools in Anthem, Arizona, in this January 9, 2013 file photo. A U.S. judge who twice chastised the hardline Arizona sheriff over his office’s misrepresenting a ruling aimed at quashing racial profiling said on May 7, 2014 that the lawman was complying with an order requiring employees to be educated on the issue. REUTERS/Laura Segall/Files (UNITED STATES – Tags: CRIME LAW EDUCATION SOCIETY)