Authored by Tsvetana Paraskova via OilPrice.com,

In March, the Biden Administration authorized the release of 1 million barrels per day (bpd) from the SPR over a period of six months in a bid to lower oil prices and potentially boost domestic production through contracts with companies to purchase future oil at fixed prices. The SPR releases are a response to the disruption of global oil markets caused by Russia’s invasion of Ukraine and subsequent Western sanctions that have led to soaring oil and gas prices. The final plan called for a total release of 180 million barrels of crude from the SPR to counter the inexorable increase in oil prices amid a tight market.

Earlier this week, Bloomberg News reported that the Administration could start filling the SPR when oil prices drop below $80 per barrel. The timing is being considered as the Biden Administration looks to have U.S. oil production continue growing and prevent a plunge in oil prices, sources with knowledge of the matter told Bloomberg.

[ZH: Having thus announced the ‘floor’ in crude prices for the coming months, and having been ridiculed by many on the market for doing so, a response was necessary… no matter how risible it appeared.]

After the report, Energy Department spokeswoman Charisma Troiano said in the statement, carried by Bloomberg:

“Claims that we are currently considering buying oil once it dips below $80 a barrel are inaccurate.”

“The Department of Energy proposed an approach months ago to replenish the Strategic Petroleum Reserve, and that approach does not include any such trigger proposal. As we said then, we anticipate that replenishment would not occur until well into the future, likely after fiscal year 2023,” the spokeswoman added.

Early on Thursday, the U.S. benchmark WTI Crude was trading at around $89 per barrel before the denial. 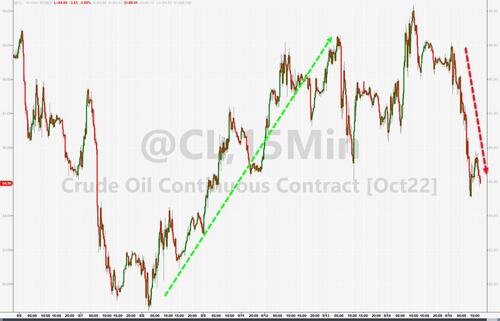 The price dipped last week to $81 a barrel – the lowest level since January as concerns about oil demand in slowing economies took center stage on the market.