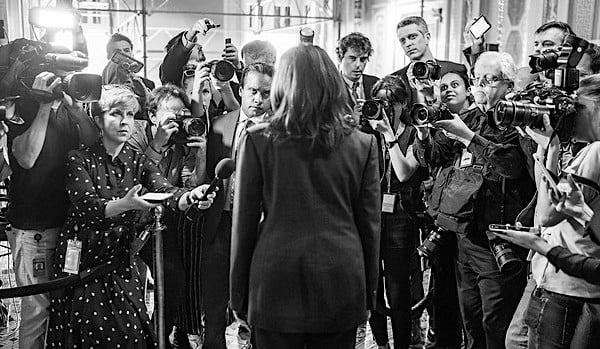 Vice President Kamala Harris addresses the media after presiding over a vote in the U.S. Senate, Tuesday, June 23, 2021, at the U.S. Capitol in Washington, D.C. (Official White House photo by Lawrence Jackson)

So of course Kamala Harris had to delete from a reference to the Declaration of Independence its open affirmation of Americans’ right to “life.”

It was a Gateway Pundit commentary that bluntly cited Harris’ decision to alter the nation’s foundation document.

“Kamala’s grotesque omission from Declaration of Independence in pro-abortion speech: We’re guaranteed ‘the right to liberty, and the pursuit of happiness!’ Whoa, what happened to the right to ‘life?'”

BREAKING: Kamala Harris omits the right to “Life” when quoting the Declaration of Independence in pro-Abortion Speech, says all Americans are “endowed with the right to liberty and the pursuit of happiness” pic.twitter.com/O8V39cbtbk

At a recent pro-abortion speech, she attacked Florida Gov. Ron DeSantis over the state’s ban on abortion after 15 weeks.

Was Kamala’s omission of the ‘right to life’ intentional?

The report said Harris also censored “Creator” from the document when describing where rights come from.

“A promise we made in the Declaration of Independence – that we are each endowed with the right to liberty and the pursuit of happiness,” Harris said. “These rights were not bestowed upon us. They belong to us as Americans.”

The Declaration actually states: “We hold these truths to be self-evident, that all men are created equal, that they are endowed by their Creator with certain unalienable Rights, that among these are Life, Liberty and the pursuit of Happiness.”

Misrepresenting the nation’s founding documents, however, appears to be more policy than inadvertent for the Biden administration.

Biden himself said not long ago, “We hold these truths to be self evident. All men and women created by the, you know, the thing…”

Then, in the same rally, he stumbled through The Preamble of the Declaration and forgot the word ‘equal’.

“We hold these truths to be self evident. All men and women created by the, you know, the thing…”

Find out in the explosive January issue of WND’s critically acclaimed monthly Whistleblower magazine, “WINNING THE WAR AGAINST AMERICA’S CHILDREN,” available in both print and state-of-the-art digital editions.
For 25 years, WND has boldly brought you the news that really matters. If you appreciate our Christian journalists and their uniquely truthful reporting and analysis, please help us by becoming a WND Insider!