Progress politicians have been pitching free public housing for years as a cure for housing, wealth, and all sorts of other inequalities. Several West Coast cities have implemented housing first initiatives, with taxpayers shelling out more than one billion dollars in the last half-decade. Years later, the attempt to break the homeless in perpetuity hasn’t worked out exactly as politicians promised.

Ignoring the failures on the West Coast, Kansas City leaders have been exploring a similar housing first initiative for residents experiencing homelessness.

According to The Kansas City Star, Kansas City officials are considering a “150-bed village” almost like the “Hoovervilles” of the 1930s Great Depression. If built, maybe the village should be called “Bidenville.”

Here’s an example of one of the tiny homes classy sheds. 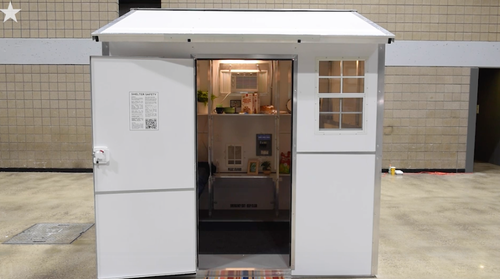 Local officials have yet to decide on the exact location of the new homeless village and provided limited details about the construction.

“Kansas City is not looking the other way anymore,” the mayor added.

We’ve seen this story before. West Coast politicians, especially in San Francisco and Los Angeles, have made grand announcements about solving homelessness through housing first initiatives, but none seem to be working.

Touted by influential political leaders, activists, and media outlets in Los Angeles, the simple solution was to build more housing for the homeless. Five years later, a billion dollars down the drain, the project has been plagued by construction delays, massive cost overruns, and accusations of corruption.

Meanwhile, unsheltered homelessness jumped 41%, vastly outpacing the construction of new supportive housing units. Streets are also becoming more dangerous, drug use is skyrocketing, and public disorder is out of control.

Without acknowledging success, Los Angeles recently called for more shelters for the entire homeless population of skid row by October. A similar story is also playing out in San Francisco.

So back to Kansas City, as if officials there have yet to publicly acknowledge the failures of the housing first initiatives on the West Coast – it appears they are diving headfirst into a destructive policy.

But again, none of that matters when City Manager Brian Platt said the housing project would be partially funded with federal stimulus.

Platt said, “This is a big part of that recovery and relief for people in the city.”

On top of the funding for the homeless village, the federal government is also paying people not to work. This is not a recovery – this is the nation diving into socialism.