KARDASHIAN fans have ripped Kim, accusing her of faking her emotional speech at Khloe’s baby shower on their Hulu show.

The SKKN mogul was seen crying on the Hulu show as she delivered kind words and hopes for her younger sister’s future at the celebration.

During the season two premiere of The Kardashians, Kim, 41, stood to deliver a speech at a baby shower for her sister held at mom Kris Jenner’s home.

She flaunted her figure in a form-fitting blue two-piece set with her white-blonde hair hanging loose over her shoulders.

She grew emotional as she spoke, choking back years as she spoke: “You have no idea how much love this baby is going to bring you.

“And I’m just happy that you’re finally getting to the place where you’re accepting this in your life because I just know that everything’s been so hard for you and that just makes me really sad for you – and there’s just no one that deserves happiness like you do.” 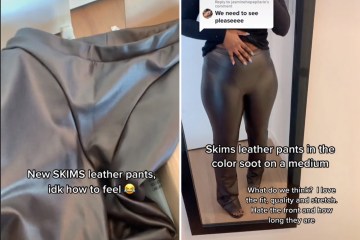 She went on: “Seriously, and if you can’t see it now – this baby is gonna bring you so much love and joy and happiness – into all of our lives.

“You’re not gonna remember what life is like without him. He will show you what real love is supposed to be like and that’s all that matters.”

Kim also cried in a confessional, revealing her wish for her sister in the future.

“I think my wish for Khloe is to not be so hard on yourself,” she said through tears.

“Everything will come to you and this baby is supposed to be here and he’s going to make you so happy and I’ll promise you, you’ll have everything that you want out of this life because no one deserves it the way that you do.”

While several viewers couldn’t help but notice that Kim appeared to be doing her now-famous “ugly cry,” others speculated that it was all for show.

In fact, some speculated that the famous family and the network went to great lengths to make the emotion seem real.

In a TikTok video, a viewer filmed themself watching a scene showing Kim crying, pointing out what they claimed was a “fake tear” on her face.

The scene in question was a confessional during which Kim’s eyes welled up with tears.

She appeared to wipe some of them away, but there was one she never touched – a detail the person who posted the TikTik claimed proves it’s true.

“Y’all please tell me you see this cgi tear on Kardashians,” they captioned the post.

One fan seemed to agree, commenting: “ngl I had the same thought when I watched.”

“Honestly, who gets a tear in the center of their eye ???” someone else questioned.

Not everyone was so convinced, however.

“Yall literally watch everything they do just to find anything to hate over. Obsessed behavior,” one critic wrote.

Another commented: “Did you stretch before doing all this reaching ??”

“Bc if you touch it the tear will ruin the makeup. If you just let it call it won’t ruin it as much,” someone else explained.

Critics have had a lot to say about the show so far, and only one episode has aired.

After the premiere aired, fans flocked to an online forum to discuss the seemingly vast timeline in the first episode.

Several seemed to think it was strange that the show kicked off where it left off, with Khloe having recently learned that Tristan fathered a child with another woman, and ended with the arrival of her son.

The Good American founder’s baby was born in August – only a few weeks before the episode aired.

“It was kinda cool to see the baby be born (late July! so recent!) but I know starting next week we’re going to go back to like January/February 2022 smh,” one critic commented.

Various viewers had different theories about why producers edited the show the way they did.

One speculated that Kim‘s breakup with Pete Davidson, who will make his debut in the second season, was to blame.

One user guessed: “I think the skete break-up screwed everything up. They probably had more footage of them going to the Marilyn Monroe dress fittings, the MET, that white house event thing they attended, that trip to bahamas and blah blah blah.”

Someone else suggested: “IMO they did the whole Khloe thing to gather more viewers. Because really that’s all most people are looking for in season two. That and Kylie’s baby.”

A third fan wrote: “We see everything in the media from the PoV of paps or people with phones. It’s been like that for 15 years of the show, and most reality shows. We watch the show for all the missing pieces, more info, behind the scenes and pov as if we were there at the time.”

Another fan appeared to agree that Kim and Pete’s split was to blame: “They are trying to switch the narrative (from Pete and Kim’s storyline) and buy some time for re-editing.”