The key event in the first week of May will be another outstanding jobs report with April nonfarm growth expected around 950k (some whispers have it as rising as high as 1.5 million, a number that will unleash another reflation tantrum) and the unemployment rate dropping to 5.7% from 6.0% in March. ISM surveys are likely to push even higher in April, with the manufacturing index rising to 66 and services reaching a new record of 65. As BofA summarizes, with the US economy reopening amid vaccinations, real activity should be robust. 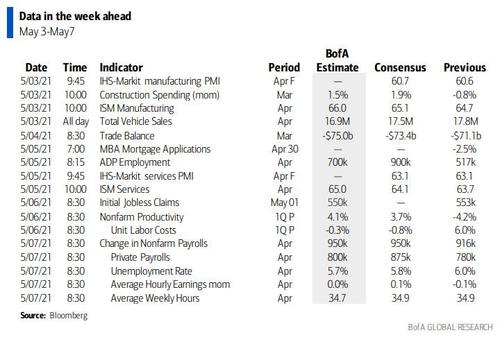 While more than half of S&P companies have now reported, and we are due for a slowdown in earning season, there is still a bevy of heavyweights reporting including iRobot and Chegg on Monday, Pfizer, TMobile on Tuesday, GM, PayPal and Rocket on Wednesday, Moderna, Square and Roku on Thursday and retail darling DraftKing on Friday. 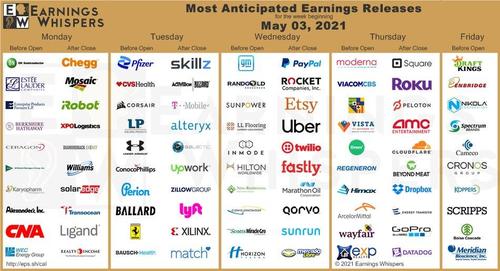 Focusing on the US economy, the key economic data releases this week are the ISM manufacturing and non-manufacturing reports on Monday and Wednesday, jobless claims on Thursday, and the April employment report on Friday. There are several speaking engagements from Fed officials this week.

Here is a daily breakdown courtesy of Goldman: