South Korean intelligence as well as the media have of late been closely monitoring Kim Jong Un’s changing appearance, especially given his clear rapid weight loss of the past months, setting off higher than usual amounts of speculation over possible ill health.

This speculation has been renewed over these past days and has taken a bizarre turn, as commentary on the reclusive dictator’s appearance is now focusing on a strange “dark green spot” on the back of Kim’s head, as NK News has highlighted.

Judging by a series of images and footage published in North Korean state media of a military event held during the last week of July, the strange mark seems the result of a prior wound – or possible medical intervention like surgery – given the spot was covered with a bandage at one point.

North Korean leader Kim Jong Un appeared with a dark spot on the back of his head during public activities last week — the latest health-related issue Kim has faced in recent years.

The cause or nature of the large, dark green spot or bruise on the rear right side of his head, which was covered with a bandage in some footage, is still unknown and is difficult to diagnose using only images. 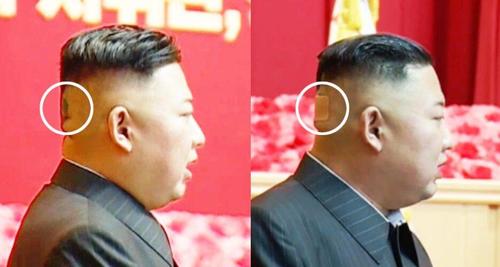 The report notes that at times state media attempted to avoid broadcasting images of the back of his head, while in other settings the discolored mark appears.

There’s so far been no indication or even acknowledgement out of Pyongyang of what it could be, even after this summer there was an unusual acknowledgement of the weight loss during street interviews with concerned citizens. 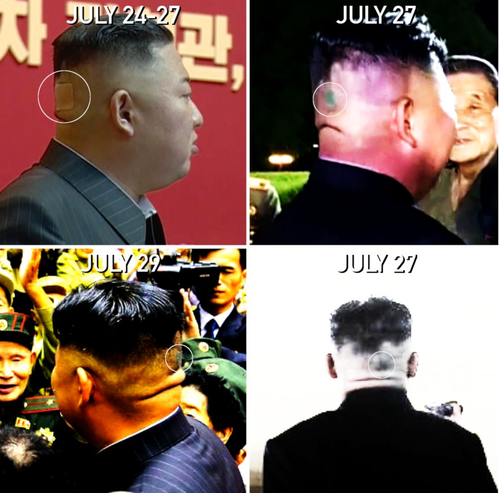 NK News put together the above montage of the latest appearances at a military event.

NEW: Kim Jong Un appeared with a dark spot on the back of his head during public appearances last week:

-Visible from July 24-27, absent on June 29
-Covered with a bandage in some footage
-Cause or nature of the large, dark spot or bruise is unknownhttps://t.co/WvwRGFME7J pic.twitter.com/oLwQCwTsJX

The bandage as well as mark had appeared after he reportedly spent two weeks away from public duties:

Meanwhile, it is likely that Kim was spending time at his Wonsan mansion during his two-week break from public activities in mid-July, just before showing up with the new mark and bandage on his head.

His recently upgraded “floating amusement park” boat appeared at the DPRK leader’s Wonsan private beach at the start of his break and was placed back in storage on the same day Kim reappeared in Pyongyang, according to Planet Labs satellite imagery.

At a politburo meeting held on 29 June, Kim’s last big appearance prior to the late July meetings, there appeared to be no mark or injury to the back of his head, or at least nothing visible, suggesting whatever it is developed within the last month.