KIM Kardashian has finally shown off her fake hair in a rare glimpse inside her over-the-top beauty regimen.

During the season two finale of The Kardashians, the SKKN mogul was seen preparing to walk in a Paris Fashion Week show.

Her preparations included sitting in a makeup chair as a team worked on her hair and makeup.

Fans finally got confirmation that at least some of Kim’s bleach blond hair is extensions as Hulu’s camera’s panned around the room to rows of hair laid out on a table.

The 42-year-old sat chatting with her team and family in the room, even greeting her daughter North, who arrived after some styling of her own.

Kim confessed that she was “nervous” – more so than she had been in a while. 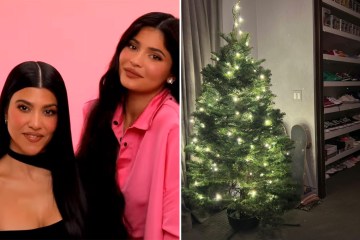 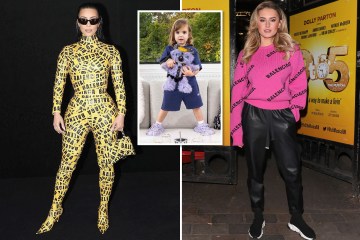 Earlier in the season, the TV personality showed off her real hair length on the reality show.

She revealed her shoulder-length natural hair after it was bleached for the Met Gala as she prepared to attend the event in May 2021.

The mom-of-four revealed the baby hairs around her forehead and ears and her silky hair texture.

Her hair was pinned back in a sleek topknot as she channeled Marilyn Monroe before slipping into a dress worn by the late actress.

Fans were in shock after seeing Kim sporting a long wig on a previous outing.

One fan asked on Reddit: “Kim’s natural hair length-why don’t we ever see it?”

Another posted: “It’s clear she has thin hair. Her part is pretty wide, even when it was dark. She colors it in at times.”

A third disagreed, writing: “It doesn’t look sparse or too fried here to me. Nothing a trim couldn’t fix.”

Along with wearing extensions and wigs, Kim has faced rumors in the past that she’s had lip fillers, a nose job, and a facelift.

She had repeatedly claimed she has only had Botox.

Kim’s looks have been a hot topic as of late, with many fans focused on her shrinking frame amid major weight loss.

She lost more than 21 lbs. with her weight loss kicking off ahead of the Met Gala and continuing on.

The Skims founder recently shared a collage of photos showing off her shrinking bum.

In the pics, Kim posed while donning loosely-fitted pants, a black crop top, heels, and her long platinum locks flowing down.

They captured the beauty mogul from behind, crouched down as various colors of bright light illuminated around her.

The photos came after fans speculated that Kim got her rumored butt fillers removed due to her seemingly smaller buttocks.

Earlier this year, Kim git fabs buzzing when she showed off her much smaller curves in a silver gown at the White House Correspondents’ dinner.

She stunned in a shiny Balenciaga Couture dress on the red carpet alongside her then-boyfriend, Pete Davidson, 29.

While fans praised her for her look, others compared her appearance to previous years, particularly her slimmed-down butt.

HollywoodUnlocked kicked off the conversation by sharing a side-by-side photo of the model donning her White House outfit and a throwback mirror selfie of Kim wearing a bodysuit.

Kim made a similar stance in both photos, highlighting her butt from behind.

One fan pointed out the noticeable difference in her figure in the post, writing: “And just like that BBL Kim Kardashian is over!”

4 hours ago
Wanda Sykes Hammers Facebook for Taking Trump Back