KIM Kardashian has revealed details regarding her mom Kris Jenner’s will and which grandchild will inherit her most prized designer bag.

The Keeping Up With the Kardashians alum slammed her mother on The Late Late Show with James Corden this Wednesday night regarding her first photoshoot with Karl Lagerfeld.

The fashion designer gifted her mom Kris, now 66, a one-of-a-kind Chanel bag which Kim, 41, has revealed will go to her eldest daughter North when she passes.

The conversation began when the talk show host asked Kim to detail a memorable moment at the beginning of her career.

The reality star immediately thought about the time her mother stole her thunder at a photo shoot that left the model “hysterically crying.”

“I went to my first-ever Met Ball, and I’m sitting at the table, and Givenchy dressed me, and Ricardo Tisci, the designer, said, ‘Oh my God, I have this idea. You’re eight months pregnant. Let’s do a shoot with Karl Lagerfeld,'” Kim recalled. 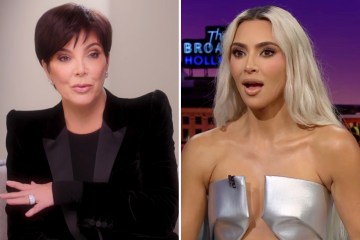 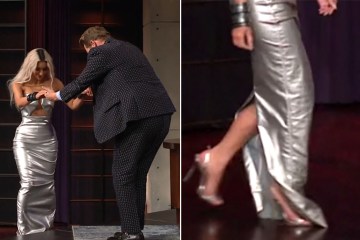 Kim continued: And so, I went to Paris, and I was so excited, and I told all my friends, and they were like, ‘Oh my God, you’re shooting with Karl Lagerfeld.'”

She then explained that the “rumor” was those who worked with the famed designer for the first time were gifted a bag that she was eager to receive.

“I was so excited, I was, like, dreaming about what bag he’s going to give me. It was, like, so exciting just to be in his presence,” the Hulu star expressed.

However, things took a turn when Kim’s mother, Kris, 66, showed up donning what the TV star described as “head-to-toe vintage Chanel.”

“He falls in love with her,” Kim said of Karl’s reaction to Kris’ attire.

“He doesn’t hardly even acknowledge that I’ve been like sitting there – it’s all about Kris Jenner,” she added.

The beauty mogul admitted that she tried to hold her composure to complete the job, though she did not expect what would happen next.

“At the end of the shoot, I’m like so excited, dying, waiting for my bag, texting all my friends like ‘Oh my God, the shoots almost done, I wonder what bag I’m going to get,'” Kim prefaced.

The mother of four gushed over the black and white crystal “Lego clutch” showcased to her, calling it a “one-of-a-kind” accessory.

“I’m literally like, ‘This is the moment. He’s going to give me the bag,'” Kim said with her mouth agape.

However, the exchange didn’t go as Kim planned as she revealed that Karl passed the bag “over her” to gift to her mother.

Kim expressed her disappointment that the momager was gifted the luxurious present instead of her.

“I went into the bathroom, started hysterically crying. And I’m like, pregnant, hormonal, flew all the way to Paris for this,” the SKKNs founder ranted.

“I called my cousin Cici [Bussey], and I’m like, ‘this b***h took my f***ing bag, and I was gonna give it to my daughter – I was pregnant with my daughter North, and I had this whole plan that this was gonna be the bag and I was gonna have it displayed in her room,” Kim explained.

Kris seemed to feel remorseful over the mishap as Kim shared that her mother has a “provision in her will that North gets the bag” when she passes away.

Kim shares North, nine, and her three other children: Saint, six; Chicago, four; and Psalm, three, with her ex-Kanye.