KIM Kardashian has suffered an embarrassing wardrobe malfunction that forced her to protect her modesty with her hands.

Fans are buzzing about the moment, which is featured in a shocking new video.

During the finale episode of The Kardashians on Hulu, Kris Jenner, Kourtney Kardashian, along with Kim, 42, gathered at Khloe Kardashian‘s house to spend time with her and see her baby son shortly after his birth.

The family sat on a small couch in one room, marveling one by one at the newest addition to the family.

After a while, the Good American founder’s eldest child, True Thompson, snuck out of where she had been – off camera – and popped into the room as the ladies were taking turns saying how “proud” they were of one another.

Kim laughed as she said: “We’re proud of you, True.” 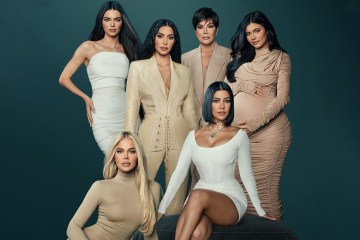 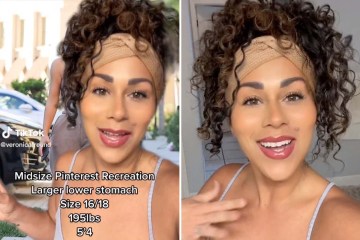 She was playfully shooed off but as the SKKN mogul leaned forward, it appeared her zip-up top opened up too far and exposed her breast.

Fans didn’t actually get a look at the wardrobe malfunction but did catch Kim’s recovery attempt as it unfolded as she displayed a shocked facial expression due to the unexpected moment.

As she zipped her top up, she squealed “oh!” as her jaw dropped while she covered her chest with her hands.

Kim, their mom Kris, and her sisters all had a laugh about the moment before moving on.

The reality TV personality shared a photo of herself rocking pieces from the Balenciaga x Adidas collaboration on Instagram.

Some seemed to think the post was an attempt to get back at her ex, Kanye West.

Others, however, were simply focused on the fact that she was wearing Balenciaga in the wake of a major scandal involving the brand.

The company came under fire after launching a recent ad campaign featuring children.

In one photo, promoting a purse, eagle-eyed viewers noted documents referencing child pornography in relation to a Supreme Court opinion.

Critics were outraged and puzzled by the photographer’s decision to include the paperwork in the photos.

Balenciaga addressed the drama, issuing a statement saying that they “sincerely apologize” and adding that “our plush bear bags should not have been featured with children in this campaign.”

They also apologized for “displaying unsettling documents” in the campaign, adding that they “take this matter very serious and are taking legal action against the parties responsible for creating the set and including unapproved items for our spring 23 campaign photoshoot.”

The company said: “We strongly condemn abuse of children in any form. We stand for children safety and well-being.”

Her photo was shared on Reddit, with fans holding nothing back as they reacted.

“She’s not about to denounce s**t. They will stay quite like Astroworld,” one critic commented.

Another critic wrote: “Kim publicly said she would eat s**t to stay young. There is literally nothing she wouldn’t do for fame and money! The sad part is she has much more money than she could spend in a lifetime. She probably lives off her money making her money and she’d still sell her soul for 1 dollar. I’d never expect her to put children in front of that!”

“She’s just so ignorant and vapid,” a third hater wrote.

Someone else added: “This whole thing is really gross. Hopefully, she’ll get called out for sexualizing her own daughters, for clicks, too. They deserve so much better.”

Kim’s not the only one who’s been tied to Balenciaga and controversy.

Her ex-husband Kanye West was dropped by the fashion house following some recent controversial comments he made.

He also incensed the public by making antisemitic comments and wearing a “White Lives Matter” T-shirt to a fashion show.

On October 7, Kanye wrote on Instagram: “Ima use you as an example to show the Jewish people that told you to call me that no one can threaten or influence me.”

Defcon is a military term used as an alert system by the US armed forces.

Under the Defcon 3 warning, the military must be prepared to launch operations within 15 minutes of the warning.

During an interview with Piers Morgan, Kanye refused to apologize for the tweet.