KIM Kardashian has flaunted her skinny figure in a tight nude bodysuit in a new photo.

The 41-year-old has concerned fans with her seemingly thinner waistline after revealing she dropped 21 pounds.

Kim showed off her more petite frame in a snap where she donned the tightly-fitted ensemble, accentuating her hourglass figure.

The beauty mogul kept most of her skin covered beneath the skin-colored bodysuit and her blonde hair flowing down.

She posed by pouting her lips and making peace signs with her fingers at the camera.

Her hairstylist, Chris Appleton, shared the snap on Instagram with the caption: “I swear this woman is a unicorn” and a fire emoji. 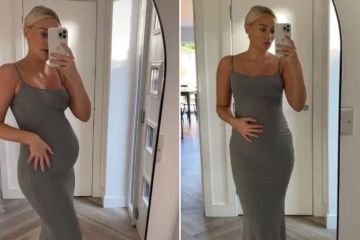 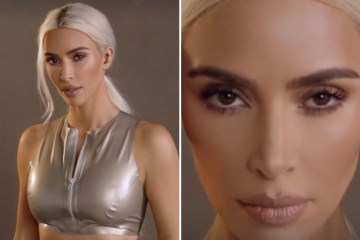 Kim gushed over the compliment, replying: “OMG that’s the nicest thing anyone has ever said to me lol” with a unicorn emoji.

The SKIMS founder has been sharing a bunch of sexy photos lately to promote her products, including her new Beats collaboration, which dropped this week.

The Hulu star posted a batch of photos and videos on her Instagram Stories showing off the earbuds.

Her chiseled face and thin frame were also displayed as she wore a form-fitting crop top and her blonde locks pulled back into a ponytail.

She also shared some thirst traps of her in the pool, nearly spilling out of her brown bikini top while sipping on a cocktail.

Earlier this week, Kim again exposed her tiny waist and arms as she posed in a matching bra and underwear for a SKIMS advertisement.

The star stood with her arms overhead and long locks flowing behind her.

She flexed her lean biceps to show off how slim her arm appeared and a Beats wireless headphone in her ear.

The pose emphasized the TV star’s slim waist and toned curves through her hips.

Kim’s friends and family have grown worried over her less voluptuous figure since she began her weight loss journey.

In May, Kim dropped 16 pounds in three weeks so she could fit into Marilyn Monroe‘s dress for the Met Gala.

She later revealed on the TODAY show that she was down over 20 after adopting a healthier lifestyle.

But those closest to the star feared that she may have gone too far in her diet and exercise regimen.

“Kim looks amazing, always, but she’s good at keeping how stressed she is hidden,” an insider previously told The U.S. Sun.

“She’s the skinniest she’s ever been and barely sleeping. Her family knows that a lot of this is her rebounding from a very controlling marriage and her determination to show Kanye [West] how much better she is doing without him.

“But whereas before she was incredibly healthy and well-rested, now she’s constantly jetlagged, and she’s finding it hard to fit workouts in. I think Kim’s really struggling but won’t admit it. “

The source added: “She’s juggling being a hands-on mum, her studies, the high-pressure filming schedule, and is always on edge that Kanye will go on another rant.

“Everyone is worried she’s burnt out.”

At the time, the mother-of-four was also traveling back and forth from California to New York to see her now ex-boyfriend, Pete Davidson, 28.

Rumors have since circulated that Kim has rekindled her romance with Kanye, 45, following their split in February 2021.