Krugman’s Delusion: The Difference Of Theory Versus Reality

In a recent interview with Business Insider, Paul Krugman’s delusion was evident as the difference between economic theory and reality was on full display.

However, such is always the difference between economists who spent their lives in the “ivory towers” of academia instead of those who created businesses, jobs, and prosperity.

While many economists attempt to make economic theory a science, it is still a function of human psychology and behaviors. For example, the theory is that if the price of beef rises too much, consumers will switch to chicken. However, in practice, individuals often make other choices instead.

Most economists, Krugman included, believe the economy is about to come roaring back to life with economic growth rates that will surpass anything seen in this current century. Such may well indeed be the case momentarily as massive stimulus and spending flow through the system. However, what happens then?

After 12-years of monetary interventions, we now have plenty of evidence to determine if Paul’s view of the world is indeed what he claims it be.

Wages Will Recovery With The Economy

“So there’s basically not much of a downside to having a very rapid economic recovery. If you’re an ordinary American, you can say, ‘look, the odds are that by this time next year, jobs will be plentiful, things will be looking pretty good. Inflation might be a bit higher, but your income will be more than keeping up with it.’” – Paul Krugman

It is correct there will be inflationary pressures if we indeed do have a rapid economic recovery. However, Krugman’s mistake is in stating that wages for “ordinary Americans” will rise commensurately. Since 2007, the inflation-adjusted wage growth for the bottom 80% of Americans has not grown. 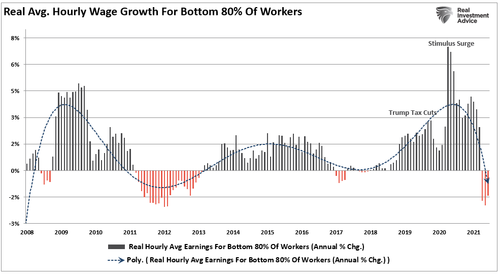 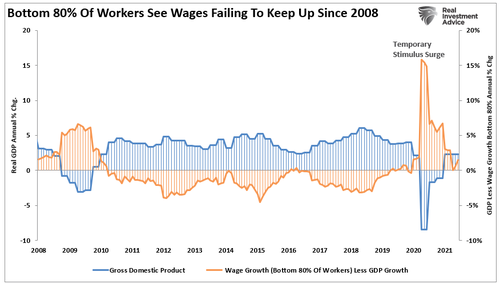 Furthermore, since 1990, wage growth has failed to keep up with the rising cost of the standard of living for the bottom 80% of Americans. The chart below shows the gap between wages, savings, and living costs through the end of 2020. It requires roughly $4000 in debt annually to “fill the gap” between incomes, savings, and the cost of living. 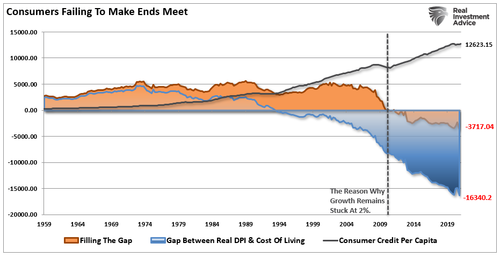 Given that it takes a “full-time” job to support a family, it is increasingly difficult to look at the chart below and suggest that we are anywhere near full employment. 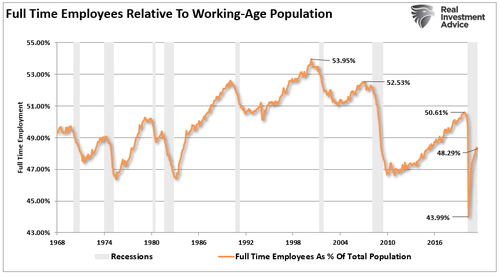 Of course, when Government Transfers make up more than 40% of real disposable incomes, it only further undermines Krugman’s view of American prosperity. 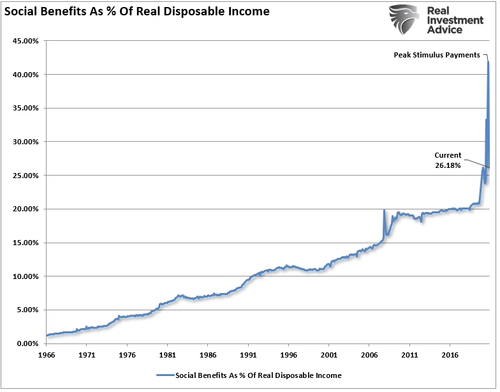 Interestingly, given all government spending was done through debts and deficits, Krugman sees no evidence of any problems.

No, Debt Is A Problem

“We’ve learned two lessons from the past dozen years. The U.S. economy can in fact run a lot hotter than we thought. It is, in fact, okay to have nice things. We can have full employment and it doesn’t mean that that hyperinflation is around the corner. And, the debt doesn’t seem to be a problem at anything near current levels.”

As noted above, we haven’t seen anything close to true “full employment” since Bill Clinton was President. But such also corresponds with the tipping point to where debts and deficits became corrosive to economic growth. As shown, despite continued increases in debt, economic growth has continued to deteriorate, the wealth gap widened, and the calls for socialism rose. 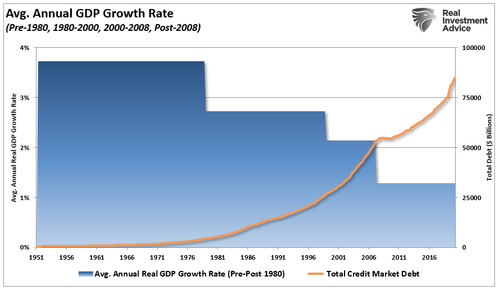 I am not sure how Krugman can conclude that debt at current levels has no consequence. Such is particularly an issue where it now takes more than $5 in debt to create $1 of economic growth. 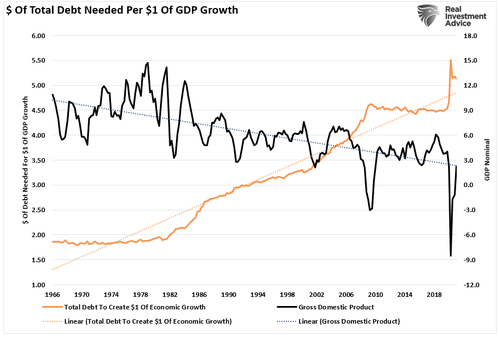 As we discussed in “Sugar Rush:” 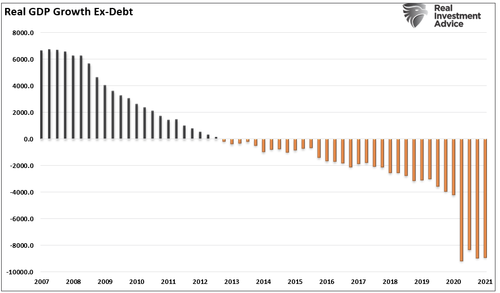 Such is why, after more than a decade of monetary and fiscal interventions totaling more than $43 Trillion and counting, the economy remains on “life support.”

(It required roughly $12 in support to generate $1 of economic growth.) 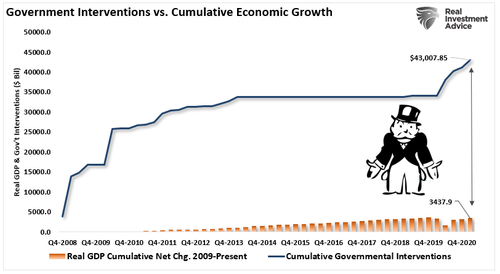 While the claims of a robust economy rely heavily upon a surge in consumer spending, as noted above, it is a mirage of the increase in “social benefits.”

“I’m worried that they’re excessively paid for. In principle, they’re supposed to be fully paid for. But take what we knew about the economy in 2019. We were really kind of in secular-stagnation land with low neutral real rates. We had full employment then, it was only thanks to extremely low interest rates and persistent deficit spending. What the doctor ordered is some sustained moderate deficit spending.”

After 12-years of “Zero Interest Rate Policies,” and successive rounds of trillions of dollars in monetary interventions, there has been little to show for it. 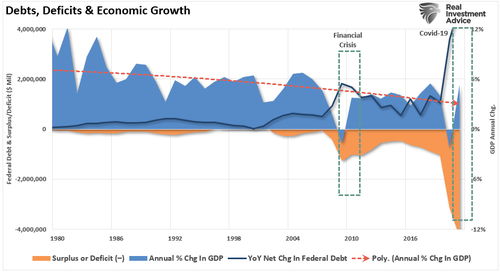 The only thing we can attribute to 12-years of the most progressive and aggressive monetary experiments in history is a massive surge in the “wealth gap.” The top 10% of income earners own ~90% of the entirety of equity assets. 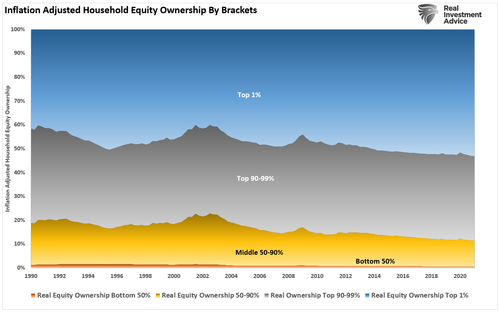 I am not sure that doing more of the same is going to generate a different result.

The problems that both Keynesian and Modern Monetary Theories run into is three-fold:

The “trap’ that economists, along with the Fed, have fallen into is that “stimulus” only pulls forward “future consumption.” Yet, as we saw after the initial CARES act, as soon as financial supports evaporated, so did economic growth.

After 12-years it is clear “something has gone wrong.” Despite perennial hopes of “higher growth rates,” such has not been the case. Instead, the only thing that has grown is the debt and deficits which continue to erode economic solvency. 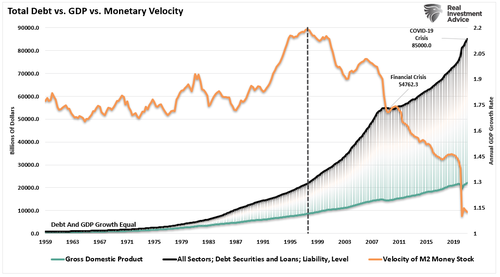 While the U.S. economy will indeed exit the recession in 2021, it may be a statistical result rather than an economic recovery leading to broader prosperity.

The most significant risk of the latest stimulus package is a surge in inflationary pressures, undermining the stimulus’s benefit. That concern will manifest itself as a stagflationary environment where wages remain suppressed while costs of living rise.

Due to the debt, demographics, and monetary and fiscal policy failures, the long-term economic growth rate will run well below long-term trends. Such will only continue to widen the wealth gap, increase welfare dependency, and socialism usurping the “golden goose” of capitalism.