Authored by Matthew Vadum via The Epoch Times (emphasis ours),

The executive director of California’s largest labor union has resigned from her post after the state charged her and her husband with embezzlement, tax fraud, perjury, and failure to pay unemployment insurance taxes. 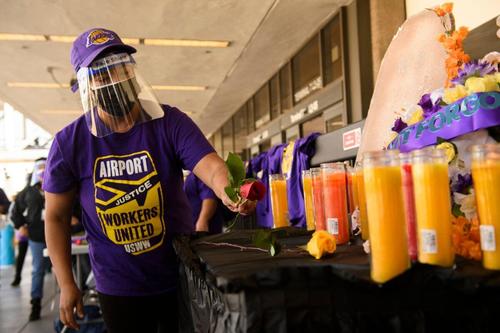 Then-Service Employees International Union (SEIU) California Executive Director Alma Hernandez and her husband, Jose Moscoso, were charged in a seven-page felony complaint filed with the Sacramento County Superior Court earlier this month. Hernandez had held the position since 2016. The charges, which came about as a result of a multiagency investigation led by California’s Tax Recovery in the Underground Economy Task Force, were made public this week by California Attorney General Rob Bonta, a Democrat.

“The union is also a major player in the Capitol, pushing for policies such as a $15 minimum wage,” The Sacramento Bee reported. “It represents local government employees, state workers, in-home caregivers, lecturers, janitors, and health and care professionals, among others.”

In announcing the criminal proceeding on Oct. 13, Bonta defended the role of labor unions.

“Labor unions are an integral part of what makes California strong. Unions are working people standing together to demand fair wages, quality healthcare, a safe work environment, and the ability to retire with dignity,” he said in a statement.

“Working people deserve leaders they can depend on to help them achieve these goals at the bargaining table and through political advocacy, but also leaders they can trust. When there is reason to believe trust has been broken and crimes have been committed, we have an ethical duty to investigate—we owe that to the people of California.”

The California Department of Justice’s Bureau of Investigation began probing the married couple’s finances after the Fair Political Practices Commission alleged following an investigation that Hernandez had embezzled $4,500 from an SEIU California-sponsored political action committee, or PAC. It’s also alleged that she declared on a form that the PAC paid $11,700 to her husband for food vendor services that she knew hadn’t been provided.

The California Franchise Tax Board alleges that Hernandez and Moscoso underreported their income by $1.4 million from 2014 to 2019. The Employment Development Department also claims that Moscoso’s air duct cleaning business failed to report and remit taxes on employees’ wages from 2017 to 2020 and that he paid employees under the table.

The complaint also included a so-called white-collar crime enhancement that would force the couple to serve time in state prison if convicted.

Family spokesperson Mari Hernandez told The Sacramento Bee that Hernandez quit her job so that she could focus on “legal issues facing her family.”

“Those who know her know she has devoted her entire working life to the cause of justice and dignity for working people, especially those without power, privilege, or papers,” she said.

Timothy Snowball, California litigator for the Freedom Foundation, which has been critical of public-sector unions, said malfeasance in labor unions is commonplace.

“This kind of corruption at the highest echelons of leadership of SEIU California or any other union,” comes as no surprise “unfortunately,” according to Snowball.

“We’ve been documenting and spending time for years explaining to public employees about this type of corruption,” he told The Epoch Times.

“So the way this works is public employees show up at their jobs the first day, and like many jobs, you’re handed a pile of paperwork to fill out.”

That paperwork typically contains union membership cards, according to Snowball.

“A lot of times they don’t even explain what these cards are,” he said. “Sometimes, they’ll send in union representatives to strongarm people into signing these things. They find them, and then they have money taken out every paycheck to unions like SEIU California, who then take that money and spend it on political causes that those members very well may oppose.

“And when people find out about this, they go, ‘Oh, my gosh. I had no idea you’re going to be spending this on fighting the recall or anything else. And hey, I don’t want my money spent that way.’ And the union winds up saying, ‘Sorry, you signed this card. You didn’t read the fine print, and now you’re out luck.’ And it’s absolutely outrageous.”

Steve Smith, a spokesman for the California Labor Federation, implied that criticism now being leveled at SEIU wasn’t sincere.

These charges “provide fuel” to union opponents, Smith told The Sacramento Bee, but stated that every union leader in the state “takes the responsibility of being a good steward of members’ funds very seriously.”

“The way we fight back against politically motivated attacks is by continuing to show what a strong, unified labor movement accomplishes for working people,” he said.