Much of the Western half of the US is in a severe drought, and parts of the Southwest are “exceptionally dry,” the worst category, according to US Drought Monitor. Taking this into account, the iconic Hoover Dam has just recorded the smallest amount of water inside Lake Mead since the 1930s. 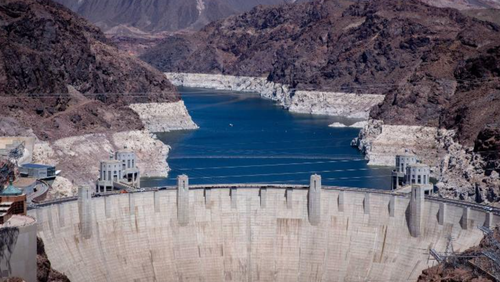 The damming of the Colorado River at the Nevada-Arizona border created Lake Mead and supplies water to 25 million people, including in the cities of Las Vegas, Phoenix, Tucson, Los Angeles, and San Diego.

We’ve explained in the past if Lake Mead drops to dangerously low levels, the entire town of Las Vegas is absolutely screwed because two pipes, known as straws, are at elevation 1,050 feet and 1,000 feet. However, a third straw was recently constructed at 860 feet just in case the water level continued to drop. For Vegas to prevent a total collapse if Lake Mead continues to drop, it will have to continue constructing straws at lower and lower depths. 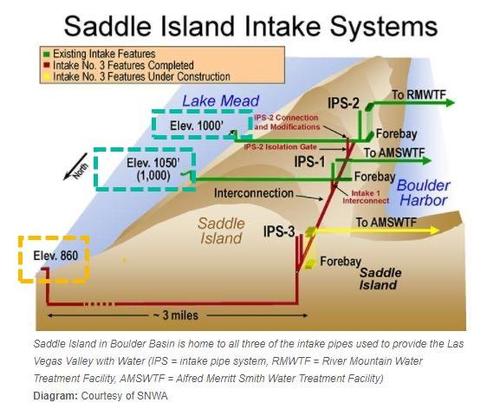 Tim Barnett, a climate scientist at the Scripps Institution of Oceanography, wrote back in 2014 that Lake Mead wasn’t able to supply Vegas with water, “it’s just going to be screwed. And relatively quickly. Unless it can find a way to get more water from somewhere, Las Vegas is out of business. Yet they’re still building, which is stupid.”

… and this quote was over seven years ago, and the water situation has dramatically worsened. 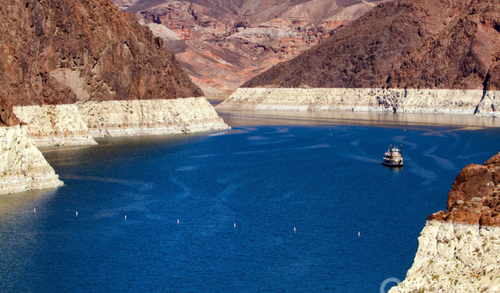 As of Wednesday, the lake’s water level sank to 1,071.56 feet above sea level and broke the record low in July 2016. Since the early 2000s, the water level has plunged 140 feet due to years of drought that has gripped the region. 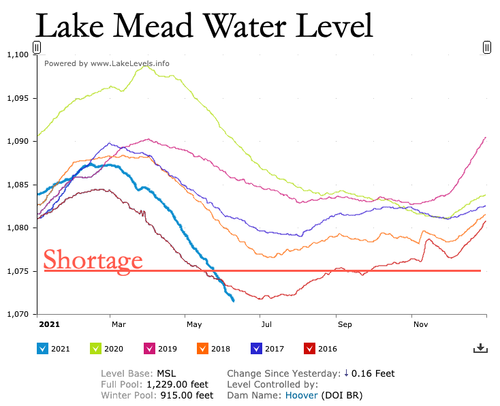 “Some states, especially parts of California and parts of the southwest, it’s really quite extreme drought conditions,” Ben Cook, a climate scientist at NASA’s Goddard Institute for Space Studies, told Reuters. Here’s a map (as of June 3) of the drought situation, which is extremely severe. 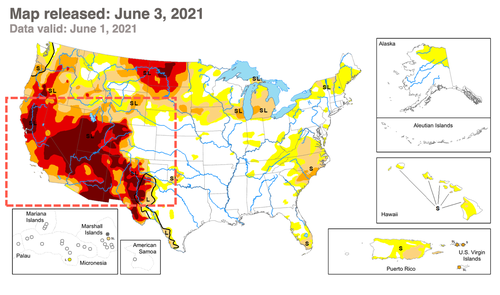 Artificial lakes, such as Lake Mead, is no match for Mother Nature, and the latest drop in water level could force state governments (Arizona, California, Colorado, Nevada, New Mexico, Utah, and Wyoming) to pass a water shortage declaration sometime this summer.

The demand for water downstream from Hoover Dam continues to increase. Farmers in the Southwest are itching for Lake Mead’s water to irrigate their crops as their land becomes fallow. 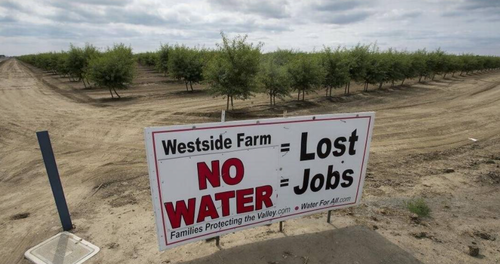 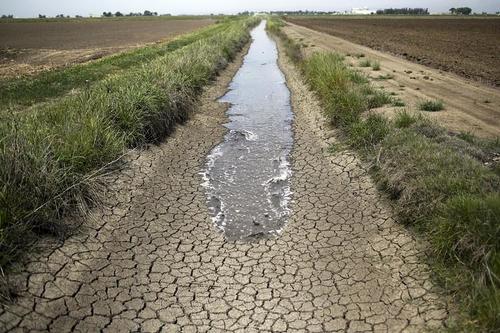 Over the past year, the lake has declined by more than 16 feet and is projected to fall nine more feet by the end of 2021. The lake’s trigger point for a “shortage,” declared by the government, is 1,075 feet, which has already been broken.

“Our previous number [for cutoff] was at elevation 1,050, and now we’ve lowered that number to 950,” Hoover Dam, facility manager Mark Cook told CBS News. “So, we bought ourselves 100 feet.”

For more than a half-decade (see: here & here), we have the ongoing problems of Lake Mead and how it could impact the water supply of tens of millions of people. Now that the lake is at levels not seen since it was filled in the 1930s, and below levels for an official “shortage.” This means an emergency declaration of water shortage could be seen sometime this summer.

The drought is so severe that the governor of Utah is urging people to pray for rain.