Authored by Alastair Crooke via The Strategic Culture Foundation,

Globalist forces are being mobilised to win a last battle in the ‘long-war’ – looking to break-through everywhere. 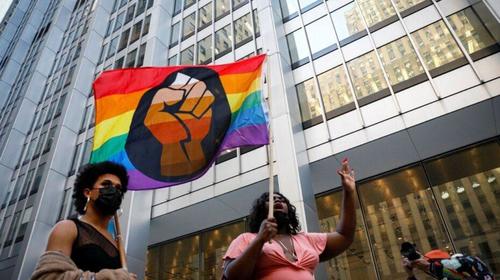 In The Revolt of the Public, Martin Gurri, a former CIA analyst, contends that western élites are experiencing a collapse of authority deriving from a failure to distinguish between legitimate criticism and – what he terms – illegitimate rebellion. Once control over the justifying myth of America was lost, the mask was off. And the disparity between the myth and public experience of it became only too evident.

Writing in 2014, Gurri foresaw that the Establishment would respond by denouncing all evidence of public discontent, as lies and disinformation. The Establishment would, in Gurri’s telling, be so constrained within their ‘bubble’ that they would be unable to assimilate their loss of monopoly over their own confected ‘reality’. This Establishment denial would be made manifest, he argued, in a delusional, ham-fisted authoritarian manner. His predictions have been vindicated with Trumpist dissidence denounced as a threat to ‘our democracy’ – amidst a media and social platform crackdown. Such a response would only confirm the suspicions of the public, thus setting off a vicious circle of yet more “distrust and loss of legitimacy”, Gurri concluded.

This was Gurri’s main thrust. The book’s striking feature however, was how it seemed so completely to nail the coming Trump and Brexit era – and the ‘anti-system’ impulse behind them. In America, this impulse found Trump – not the other way around. The point here essentially being that America no longer saw Red and Blue as the two extended wings belonging to the bird of liberal democracy. For something around half of America, the ‘system’ was rigged towards a profiteering 0.1%, and against them.

The key point here surely is whether the élites’ Great Re-set – to reinvent themselves as leaders of the ‘re-vamped’ values of liberalism, overlayered by a newly up-dated, AI and robot-led, post-modernity – is destined to succeed, or not.

Continued ‘westification’ of the globe – the principal component to ‘old’ liberal globalism – though tarnished and largely discredited, remains mandatory, as made clear in the cogent reasoning recently advanced by Robert Kagan: Absent the justifying myth of ‘seeding democracy across the world’ around which to organise the empire, the moral logic of the entire enterprise begins to fall apart, Kagan argued (with surprising frankness). He thus asserts that the U.S. empire abroad is required – precisely in order to preserve the myth of ‘democracy’ at home. An America that retreats from global hegemony, he argues, would no longer possess the cohesive binding to preserve America as liberal democracy, at home either.

Gurri is ambivalent on the élite’s ability to stick fast. He both asserts that “the centre cannot hold”, but then adds that the periphery had “no clue what to do about it”. The public revolts would likely arrive unattached to coherent plans, pushing society into interminable cycles of zero-sum clashes between myopic authorities, and their increasingly furious subjects. He called this a “paralysis of distrust”, where outsiders can “neutralize, but not replace the centre” and “networks can protest and overthrow, but never govern”.

There may indeed be some truth in this latter observation, yet what is happening today in the U.S. is but one ‘battle’ (albeit a key one) in a longer strategic war, reaching far back. The notion of a New World Order is nothing new. Imagined by globalists today, as before, it remains a teleological process of the ‘westification’ of the globe (western ‘universal values’), pursued under the rubric of (scientific) modernism.

What sets the current Great Re-set apart however, is that it is a later, more updated, version of Western values — not the same Western values as they were yesterday. The reek of colonialism has been exorcised from the imperial project through the launch of war on ‘white supremacy’ and on racial and social injustice. Global leadership has been recast as ‘saving the planet’ from climate change; saving all humanity from the pandemic; and safeguarding us all from a coming global financial crisis. Mothers’ milk. Who would resist such a well-intentioned agenda?

The current Great Re-set is a process of metamorphosis – a change in Western values, and paradigm. As Professor Dugin writes:

“And this is important — it is a double-process to update the West itself – and [at the same time], to project an updated version to the world beyond. This is a kind of postmodern combination of the Western and the Modern”.

But its essence – the root to this meta-historical struggle – always has been the world order, open society focus on dis-embedding humans from all forms of collective identity. Firstly, to dis-embed Renaissance Man from his notion of being a microcosm interpenetrating within a vast surrounding, living macrocosm (this aim being largely achieved via the advent of empirical Scientism); then the de-coupling from Latin Catholicism (via Protestant individualism); and lately, liberation from the secular nation-state (through globalism). And finally, we reach the shedding ‘late-stage’ – the severance from all collective identities and histories, including ethnicity and gender (both now to be self-defined).

It is the passage to a new kind of liberalism, one that sweeps gender and identity into full, liquid fluidity. This latter aspect is not some secondary ‘accessory’ or add on – it is ‘something’ essentially embedded within in the logic of liberalism. The logic is inescapable. And the ultimate logical end to which it leads? Well, to the dis-embedding of the subjective self into trans-humanism. (But let’s not go there; it is dark – i.e. being human is to impose the subjective on the objective – “We need to liberate the objects from the subjects, from humanity, and explore the things as they are – without man, without being a tool of man”).

And here, Gurri’s insight is salient: The plan is out of control, and becoming progressively more bizarre. The American unipolar moment is ‘done’. It has created oppositions of various kinds, both abroad and at home. Conservative and traditional impulses have reacted against the radical ideological agenda, and crucially, the 2008 Financial Crisis and near collapse of the system foretold to the élites of the ultimate coming end to the U.S.’ financial hegemony, and concomitantly to America’s primacy. It forced a critical juncture.

Now they are at a crucial impasse. When they speak about Re-set, this means a forced return to the continuation of the agenda. But it is not as straight-forward as it seems. Everything seemed almost primed to fall into place twenty years ago; yet now, the Establishment is having to fight for every element of this strategy because everywhere they encounter a growing resistance. And it is no insignificant resistance. In America alone, some 74 million Americans reject the cultural war being waged on them.

Fyodor Dostoevsky described in The Demons the consequence to all this severance from meaning, as discovered at the deepest levels of the collective human psyche. Transcendence? ‘You can’t just be rid of it’. Yearning for meaning; for knowing who we are, is hard-wired into the human psyche. In the Demons, its denial and rejection leads only to warped violence (including child-rape), wanton destruction, and other extreme pathological behaviour.

Dostoevsky originally envisioned Demons as a political polemic, but horrified by news reports of a Russian nihilist leader’s orchestration of a pointless political murder, Dostoevsky fictionalised the story, hoping to shed light on how the sensitive, genteel, well-meaning Russian secular liberals of the 1840s had prepared the way for their 1860s generation of radicalized, ideology-maddened children bent on tearing down the world.

In a sense, Dostoevsky’s exploration of the psychology of secular liberal Russians in the 1840s (who passed on their criticisms of the establishment to the next generation) were somehow forerunners to the Woodstock generation of the 1960s – of easy-going, spoiled youth in search for meaning and transcendence from boring ‘reality’ through music, sex and drugs. Both produced angry children driven by hate towards a world conspiring constantly to frustrate their vision of how things ‘should be’.

If asked why Western culture has been trapped in an oscillating dynamic between liberalism and nihilistic radicalism for roughly two centuries with no end in sight, Dostoevsky would probably answer that it is because of our dis-embedding from the deeper levels of what it means to be human. This loss inevitably creates pathologies. (Carl Jung came to the same view).

So will the Re-set be realised?

The élites still cling to westernisation (‘America is back’ – although no-one is greatly enthused). The obstacles are many and growing. Obstacles and crises at home – where Biden visibly is shedding authority. U.S. decision-making seemingly lacks a ‘Chair’, or shall we say, a functioning ring-master. Who is in charge of foreign policy? It is opaque. And America itself is irreconcilably split and weakened. But also, for the first time, the U.S. and EU are increasing seen abroad to be inept at managing the most simple of affairs.

Nonetheless, the globalist call to arms is evident. The world clearly has changed during the last four years. Globalist forces, therefore, are being mobilised to win a last battle in the ‘long-war’ – looking to break-through everywhere. Defeating Trump is the first goal. Discrediting all varieties of European populism is another. The U.S. thinks to lead the maritime and rim-land powers in imposing a searing psychological, technological and economic defeat on the Russia-China-Iran alliance. In the past, the outcome might have been predictable. This time Eurasia may very well stand solid against a weakened Oceana (and a faint-hearted Europe). It would shake Leviathan to its foundations. Who knows what might then emerge from the ruins of post-modernity.