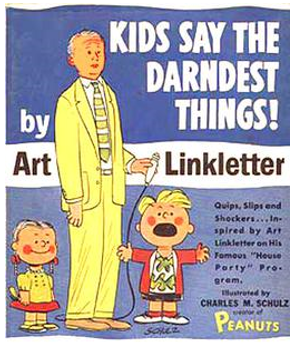 The following article, Liberals, Atheists, and Leftists Say the Damnable Things, was first published on The American Vision.

Kids Say the Darndest Things was a comedy series hosted by Bill Cosby from January 9, 1998 to June 23, 2000. The idea of the show stemmed from Art Linkletter’s radio show House Party and television series of the same name. “The show’s best-remembered segment was ‘Kids Say the Darndest Things,’ in which Linkletter interviewed schoolchildren between the ages of five and ten. During the segment’s 27-year run. Linkletter interviewed an estimated 23,000 children.”

Why do kids so the darndest things? Because they don’t know very much, as a result, what they often say is funny to us.

Adults don’t have an excuse when they say the most damnable things. It only goes to show that an education and a high-profile job do not guarantee intelligence, common sense, or moral reasoning.

Here’s one of the most damnable statements you will ever read, but consider the source:

A columnist for The Nation shrugged off sexual allegations against Joe Biden …, saying the presumptive Democratic presidential nominee would get her vote even “if he boiled babies and ate them.”

“I would vote for Joe Biden if he boiled babies and ate them,” she wrote while addressing allegations leveled by Tara Reade, a former Senate staffer who worked for Biden. “He wasn’t my candidate, but taking back the White House is that important. (Fox News)

There you have it. Actually, if it’s OK to kill preborn babies, why isn’t it OK to kill and eat born babies since only time and size have changed?

When leftist say such damnable things, they respond with, “I was only joking” (Biden), or in the case of Pollitt, her critics are “tender souls” who don’t appreciate “dark humour,” or they apologize like Australian author Clementine Ford did after she tweeted that the “coronavirus isn’t killing men fast enough.”

How to Argue with a Liberal… and Win!

Countering dozens of liberal arguments with logic and tact, this is a crash course on defending the principles of liberty from her enemies, and gives realistic, educated answers to some of the most persistent liberal and socialistic “clichés.”

Leftists are always forgiven when they say such damnable things when they offer a faux mea culpa. If conservatives had said anything like what these nut balls said, they would be blocked from every social media platform in the world and driven from public office.

Steven Pinker, an atheist, is bashing Evangelicals because many are calling for opening the country so people can go back to work. I bet there are more than just Evangelicals and maybe a lot of atheists who want to see our country get back to work.

Are all these people Evangelicals?

What about these beach goers?: “Beaches, Bars And Boardwalks Packed Across The Nation, As Many Defy Government And Social Distancing Advisories.”

I suspect Pinker is doing OK financially. He’s a best-selling author and teaches at Harvard. I’m willing to wager that he’s still getting paid when tens of millions of the formerly employed have lost their jobs because of an irrational national shutdown. Consider the following:

The lost economic output in the U.S. alone is estimated to be 5 percent of GDP, or $1.1 trillion for every month of the economic shutdown. This lost income results in lost lives as the stresses of unemployment and providing basic needs increase the incidence of suicide, alcohol or drug abuse, and stress-induced illnesses. These effects are particularly severe on the lower-income populace, as they are more likely to lose their jobs, and mortality rates are much higher for lower-income individuals. (The Hill)

So, why is Pinker blaming Evangelical Christians for ending the shut down? Because Christians believe in an afterlife and they don’t care if they die and take people with them:

Harvard psychology professor Steven Pinker said Thursday [May 21st] that the push for reopening society from lockdowns comes from Christianity’s “malignant delusion” of belief in an afterlife.

Atheists who believe in this life alone are more concerned with health and safety, Professor Pinker suggested in a Tweet, while Christians tend to devalue “actual lives” and live a riskier existence.

I want a “swift reopening” because shutting down the economy was an overreaction and unnecessary as some experts have maintained (see above links). I want to live as long as I can and take rational precautions as I do with all dangerous situations, including staying home when I’ve had the flu and avoiding people with it and other communicable diseases. I’ve always done this.

There may be some Christians who disregard sound medical advice because they are going to heaven when they die, but I don’t know anyone who thinks this way, and I bet I know more Evangelicals than Pinker does.

It’s typical of someone like Pinker not have much knowledge of Christian doctrine or history:

Historically, Christian belief in eternal life has rarely resulted in disengagement from the common task of bettering the world and looking out for the needs of others. Nor is belief in the afterlife the exclusive domain of evangelicals, but forms part of the common creed of all orthodox Christians….

Study after study has found that such “theory” is borne out in practice as well, with religious people proving far more generous with their time and money than atheists.

In one of the largest studies of its kind, the massive Social Capital Community Benchmark Survey in 2000 found that religious people are 25 percentage points more likely than secularists to donate money and 23 points more likely to volunteer their time. (Breitbart)

If Pinker and his fellow evolutionary atheists were consistent with their belief system, they would be advocating for the virus to kill off the weakest members so the more fit would survive. Instead, they are borrowing moral capital from the Christian worldview that values human life because humans are made in the image of God. Their value is imputed by God. There is no imputed value in evolved bags of animated matter.

Not surprisingly, Pinker devalues the life of preborn babies. Consider the following quotation of his from a 1997 Washington Post article “Arguing for Infanticide”:

[T]he right to life must come, the moral philosophers say, from morally significant traits that we humans happen to possess. One such trait is having a unique sequence of experiences that defines us as individuals and connects us to other people. Other traits include an ability to reflect upon ourselves as a continuous locus of consciousness, to form and savor plans for the future, to dread death and to express the choice not to die. And there’s the rub: our immature neonates don’t possess these traits any more than mice do.