Lighting The Gas Under European Feet: How Politicians & Journalists Get Energy So Wrong

Authored by Joakim Book via The Mises Institute,

Eighty-five percent of human energy usage comes from burning things. Either plants or trees grown in a geologically recent past or plants or trees (and decomposed animals) from ancient times. Solar, wind, hydro, geothermal, etc.—all the things that occupy a climate-conscious citizen, activist, or politician’s dreams—are frizzles around the edges. 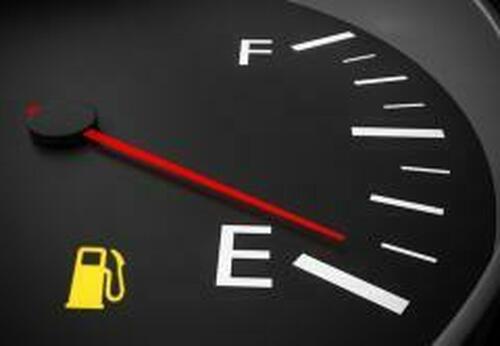 If we listened only to our energy overlords’ preaching, we would get a very different impression of what the world is like. Wind turbines powering all those electrified vehicles on our roads, solar panels and batteries of immense capacities light and heat our homes. Dirty oil and polluting coal are out; green, clean, and smart machines on the way in.

Nothing could be further from the truth. Renewables don’t power our societies, they’re not about to any time soon, and the fact that they’re not isn’t a policy choice—or “greedy capitalism” preventing this utopian (dystopian) vision.

First, some housekeeping: Energy is not the same as electricity. Electricity is a secondary energy source, derived from primary energy sources through a conversion process—combustion or turbines spinning. The 85 percent figure above is for energy use. The bombastic figures in the press about the massive growth and expanse of renewables are for electricity, which is only a subset of all the world’s energy use (some 20 percent). Oil, coal, and gas for transport, heating, fertilizers, and construction dwarf the symbolic solar panels governments paid people to place on their roof.

Solar panels and wind turbines produce a minor part of the electricity needs, but do nothing to address the larger energy needs. In contrast, fossil fuels are energy-dense, reliable, on-demand sources of either energy or electricity, and we have excelled both at storing and transporting them.

Dreams of a green revolution, per the energy theorist Vaclav Smil, were always mirages:

We are a fossil-fueled civilization whose technical and scientific advances, quality of life, and prosperity rest on the combustion of huge quantities of fossil carbon, and we cannot simply walk away from this critical determinant of our fortunes in a few decades, never mind years.

Instead, suddenly facing an adversary rich in raw materials and fossil fuels, the West’s talking heads doubled down on their green dreams. From behind comfortable newspaper desks, heated and electrified by natural gas, it’s remarkably easy to say things like: “The new reality is that we have to go all the way to universal electrification even faster, powered by 100% renewable energy with green hydrogen filling the gaps” (Andreas Kluth, at Bloomberg).

For the New Yorker, John Cassidy recently told us that we must “prevent future Putins from trying to hold the world to energy ransom—at least one worthy outcome of the tragedy that is Ukraine.”

In a powerful speech in the middle of the Russia flurry in March, Isabel Schnabel of the Executive Board at the European Central Bank rallied for renewable power:

Every solar panel installed, every hydropower plant built and every wind turbine added to the grid are taking us a step closer to energy independence and a greener economy….

Our dependence on fossil energy sources is not only considered a peril to our planet, it is also increasingly seen as a threat to national security and our values of liberty, freedom and democracy.

Luckily, Schnabel is in control of nothing less than the Eurozone’s printing press. One-upped by a fellow German, the reality-challenged finance minister Christian Lindner taught us that renewable electricity is “the energy of freedom.”

What he failed to understand is that renewable electricity generation in Germany requires boatloads and pipe loads of Russian gas, Russian oil, and Russian commodities: the steel and cement to construct their precious wind towers are made from coal, not even counting the extreme heat needed to shape the steel and iron that makes up its body.

A single wind turbine uses thousands of kilograms of nickel in its shaft and gear, plus some rare earth minerals from some pretty unclean sources. The gigantic structures, hundreds of meters tall and much too clunky to easily transport, are erected and moved there by machines that swallow diesel by the gallon.

Fossil fuels are machine food, as Alex Epstein is fond of saying, and nothing drinks petrol like the machines that power a thirsty wind energy industry. When renewable sources are added to the electricity grid in large quantities, the cost of electricity goes up, not down, because their fickle reliance on weather requires them to be backstopped by thermal plants that run on coal or natural gas. The more renewables you add, the more natural gas you need.

The conclusion from much political and media messaging on climate is the same: burning fossil fuels for energy is a choice, a bad one, and we must choose differently. The moral case against Russia is just a cherry on top.

“Would you rather rely on Mr. Putin’s Russia?” The Economist asked in a recent cover story on energy security.

The very same Russia that Bloomberg News described as:

“a commodities powerhouse, producing and exporting huge amounts of materials the world uses to build cars, transport people and goods, make bread and keep the lights on.”

But the writers at The Economist insist:

“As the world weans itself off dirty fuels, it must switch to cleaner energy sources.”

When we listen to the political overlords in Brussels or Berlin, or the intellectual ones in think tanks, political parties, or at influential media outlets, we get the impression that relying on “Mr. Putin’s Russia” can be done away with—as optional and care-free as picking a different ice cream flavor.

To hammer home the “renewable revolutions are impossible” point, let’s use the poster child for renewables, Germany. Here is its energy use over the last half century: 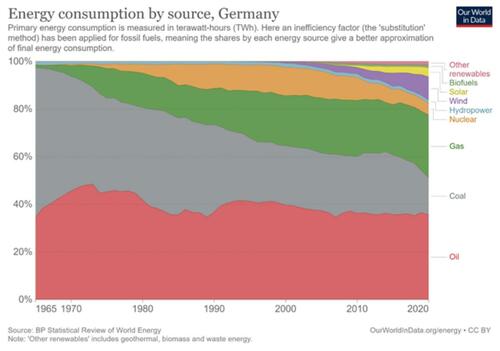 Let me know if you can spot Germany’s revolutionary Energiewende in the early 2010s. With a microscope, I can detect a little bit of wind crowding out some nuclear—while gas keeps growing and coal continues its fifty-five-year decline. What sort of fairytale must one believe to think that the purple and yellow shares—almost invisible at the top—could in any way supplant the others, preferably before next winter when Putin’s withholding of gas would once again be disastrous for Europeans.

A prominent German think tank, Agora Energiewende, also thinks it’s perfectly possible. Its projections depend, not just on building and installing more wind energy plants than ever before, but raising that rate of construction by about one-third every year for years on end. To describe those plans as “optimistic” somehow doesn’t cut it: 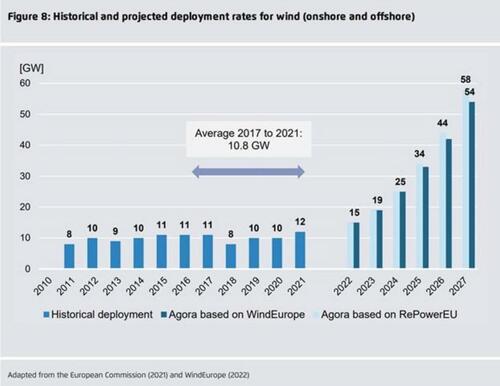 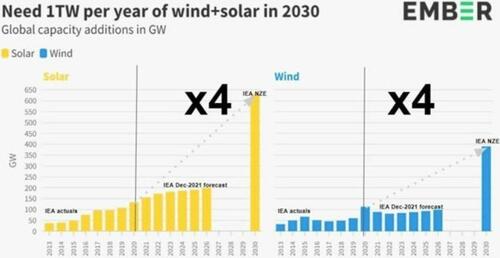 The International Energy Agency (IEA), staffed with the same sort of reality-resistant dreamers, produced this wonderful graph that plans for the energy production in a net-zero future (NZE):

At great expense and inconvenience, the world can indeed increase its use of solar and wind—but remember: they destabilize grids and constitute a vanishingly small portion of world energy needs. To replace what we need, and accommodate growth for the billions globally who scrape by on a minimum of energy, the IEA says we must add solar and wind capacity at a vertiginous rate, never before achieved, at way faster than their own forecasts.

As Alex Epstein writes in the preface to his future book Fossil Future: a net-zero policy, actually implemented “would certainly be the most significant act of mass murder since the killings of one hundred million people by communist regimes in the twentieth century—and it would likely be far greater.”

If you believe, as so many politicians, activists, and deluded journalists do, that this is a mere policy decision, you are sadly mistaken. The impossibility of renewables is a technical and physical problem—not an economic, financial, moral, or political problem.

According to mental health site VeryWellMind, gaslighting is “a form of manipulation that often occurs in abusive relationships. It is a covert type of emotional abuse where the bully or abuser misleads the target, creating a false narrative and making them question their judgments and reality. Ultimately, the victim of gaslighting starts to feel unsure about their perceptions of the world and even wonder if they are losing their sanity.”

One would suppose that, on the back of the war in Ukraine, the strict Western sanctions on Russia, and energy prices going through the roof, the green-washed politicians and policymakers who rule our lives would offer excuses. Now that the Russian invasion had those very same policymakers cutting commercial ties to that despicable empire-building strongman, and energy prices and access suddenly rose to the forefront of everyone’s mind, we’d expect a bit of humility. Apologies are in order:

Fellow Europeans, against market prices, physics, and sanity, we pushed you into worse forms of electricity generation and endangered our energy security. Instead of doing what we should have done, we relied more and more on the commodities exported from countries like Russia. For making Europeans more beholden to Putin, we apologize.

Instead, we got gaslighting on a remarkable scale.

The world isn’t weaning itself off fossil fuels—it can’t, and it shouldn’t. More importantly, “cleaner energy” aren’t options on a shopping menu, available as inconsequential choices the way consumers may choose Doritos over Pringles or a new toothpaste.

It’s becoming increasingly clear, to more and more people, that withdrawing from fossil fuels “for environmental reasons” is not a choice. A society and a world of 8 billion people more advanced than that powered by a horse and buggy, cannot do without the explosive power of fossil fuels.