PASSIONATE Englishman Phil Vickery won a World Cup with the Red Rose on his chest — but the Lions stirs something even deeper inside his soul.

Asked what it means to be a Lion, the five-cap star’s eyes widen before he clenches his fist and pulls it back.

Looking almost ready to land a punch, he said: “The Lions is about looking after each other.

“You will find out who is in the game and who is not — and that is not about always being perfect, sunshine.

“It’s about looking someone in the eye and asking, ‘Are you f***ing standing up here? Are you with me?’ Don’t ever underestimate that power.”

The Lions will need that level of passion in tomorrow’s First Test against South Africa in Cape Town.

Vickery added: “This is a great opportunity for the British and Irish Lions to create history against the world champions.

“They will have some stampeding warriors running at them.

And that Springboks team, on the front foot, coming round the corner with belief and passion . . . phwoar, it’s going to be powerful.

“So the priority for the Lions is to take on that pure physicality and intensity.

Tadhg Furlong,, Luke Cowan-Dickie, Wyn Jones and Courtney Lawes knuckle down as the Lions build up for the First Test[/caption]

“You can talk about bloody detail, algorithms, data and  spreadsheets as much as you like — this is going to be about total and utter confrontation.”

You could have been forgiven for thinking that ex-England captain Vickery’s love for the Lions was gone.

He was pummelled in the scrum by South Africa star ‘The Beast’, Tendai Mtawarira, during the First Test defeat in 2009.

The tighthead knew his tour was over when, after 44 minutes of mayhem in Durban, he was hooked.

But the Cornishman and farmer’s son was recalled for the final Test and ended the tour as a winning Lion in Johannesburg.

Ex-Gloucester ace Vickery, who has his brand new  No 3 Restaurant in Cheltenham, looked back to that infamous First Test at Kings Park and admitted: “We lost that first one because of me. It was a very dark day.

“I wanted to give so much energy, be so enthusiastic — being a Lion is about being the person as much as a player.

“I wasn’t particularly bothered by The Beast. The referee, Bryce Lawrence, didn’t do me any favours but I didn’t do myself any favours either. But he bottled it, really.

“It was just a very sad moment. It will always sit with me, I can’t do anything about it. That is sport.”

Vickery’s tale is a reminder for Warren Gatland’s current Lions that whatever happens tomorrow, there will still be plenty of rugby ahead. 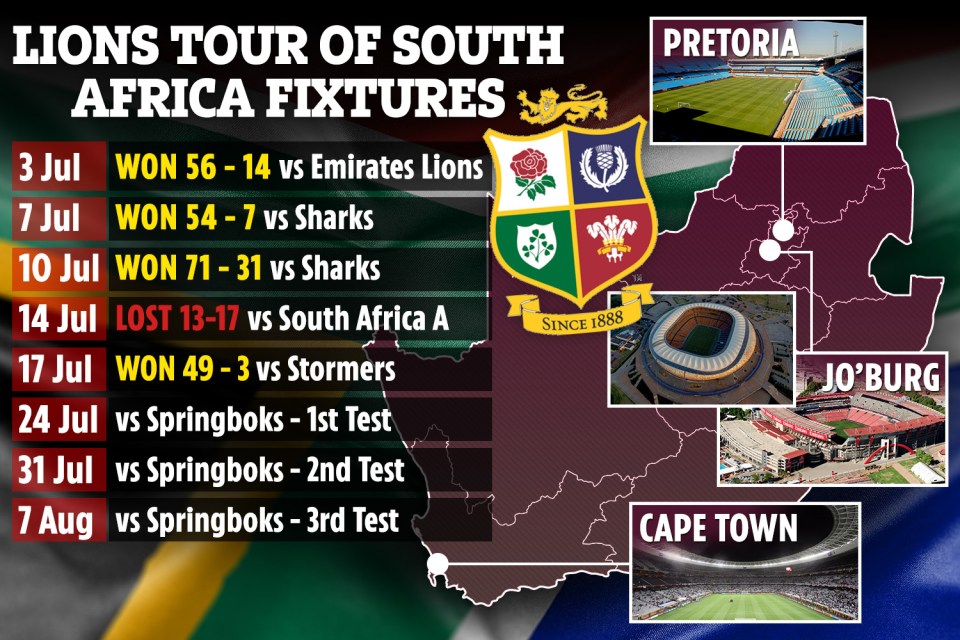 After Adam Jones dislocated his shoulder in the Second Test loss in ’09, Vickery was needed to start in Joburg with the series over, but with the Lions’ reputation on the line.

He knew there would be doubts over his selection, but Vickery said: “You can question my ability but you can never question my heart and desire.

“Having the opportunity to go out and play again in that final Test was magical.

“I felt like I was part of a special moment.

“To walk off to a standing ovation and everyone screaming “Beast!” . . . what a way to finish my international career.

“Sadly, I lost Test series in Australia and South Africa — but I won my first and last game for the Lions. I’ll hang on to that and look back on it with huge joy and privilege.”

Unlike the 30,000-strong Red Army who toured South Africa 12 years ago, this Covid-hit series in Cape Town will be without fans. And Vickery, now 45, finds that tough to take.

Most read in Rugby Union

He added: “When you see all the things people have missed — relationships, smiling, laughter, freedom — a Lions tour does that better than anything.

“The Lions is all about the fans. Supporters can’t be there, so the Lions shouldn’t be there — it’s pretty simple.

“It’s a real shame as I never experienced anything like a Lions tour with the fans.”