Ah, to see the world through the eyes of a Tesla shareholder…

We’re not sure what the daily adoration and worship of Elon Musk entails for Tesla cultists, but we’re almost certain that the rose-colored glasses that most shareholders wear constantly provide optimistic pie-in-the-sky explanations for all things Tesla, round the clock.

Stock going down? Too many naked shorts.

Elon being sued by the SEC? Big oil conspiracy to kill electric vehicles.

And now, with Long Range Model 3 delivery times being pushed back to 10-16 weeks, the only explanation must be a surge in demand. Right?

That was certainly the take of Joey Klender over at Teslarati, an unapologetically pro-Tesla blog. Klender wrote a piece yesterday noting that Tesla’s online design studio showed that deliveries were slated to be 10 to 16 weeks away for the Model 3 Long Range All-Wheel-Drive version.

Klender then takes some liberties and immediately attributes the pushback in delivery time – in one of the three configurations listed – to demand “continuing to skyrocket”:

According to Tesla’s online Design Studio, demand for the all-electric sedan’s Long Range All-Wheel-Drive variant continues to skyrocket, and new order delivery dates are being prolonged to dates as late as November. Currently, expected delivery is slated at between 10-16 weeks for the Model 3 configuration. Demand for the vehicle is still rising, just in time for the company to open a new production plant in Texas that will assist consumers’ ever-growing want for the car.

When comparing the Model 3 to the Model Y, he later states:

“It is interesting to note that the Model 3 Long Range is not the least expensive variant of the all-electric sedan. However, this has not stopped the car from having the most prolonged delivery date,” Klender, attempting some form of analysis, writes.

And he’s right. It is interesting. We did about 9 seconds worth of “research” on the issue by going to Tesla’s design studio and promptly noted that the “Performance” version of the Model 3 – one notch higher than the version Klender is pointing out, ships in 7-11 weeks. 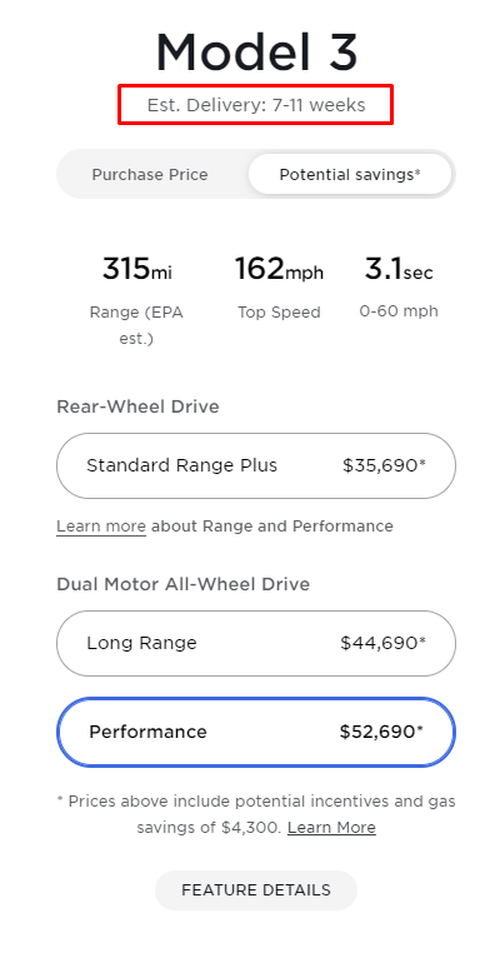 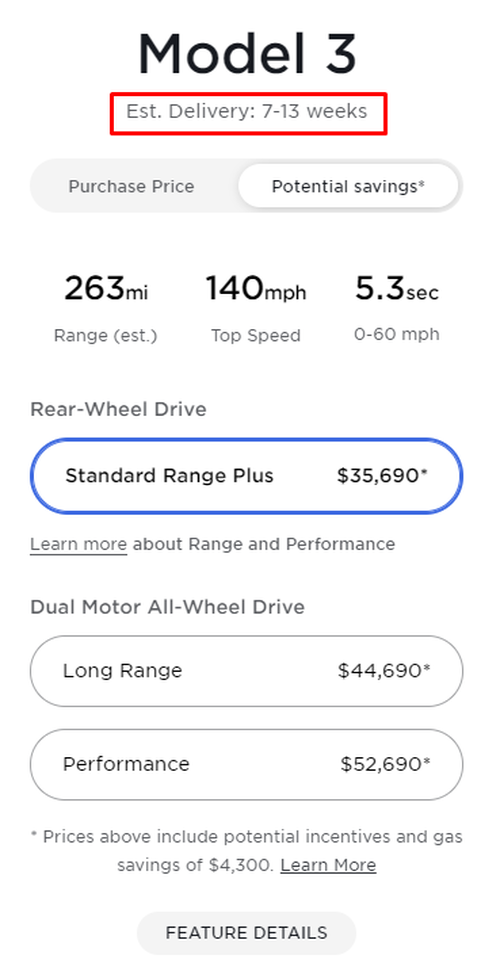 Now we’re not claiming that Klender is wrong in his analysis – just that its odd that his take on the situation is there’s a demand surge for the Model 3 that’s, for some reason, only showing up in one of the model’s configurations.

However, given that the “Long Range” Model 3 likely contains parts that the other two models don’t – and given the fact that there has been massive supply chain interruptions globally for the auto market over the last 12 months, including ones that Tesla has admitted have affected its production – we can’t help but wonder why the straight line was immediately drawn to there being a demand surge, when that information can’t be ascertained simply by looking at Tesla’s design studio?

Could it have something to do with this disclosure?

Did Klender consider the idea of supply chain disruption? Is demand actually surging? We’ll have to wait and find out.

Until then, keep your eyes peeled on Teslarati and other pro-Tesla blogs for the narrative they’d like you to believe…even in the absence of direct evidence.