Nothing says “we have a revolutionary technology coming that’ll change the world” more than selling your stock in your embattled pre-revenue company to expand your turkey hunting farm.

That’s exactly what the President of Lordstown Motors apparently did in mid-February, just weeks before a “disastrous March earnings report” crushed the company’s stock, according to Yahoo Finance.

He was part of several top executives who sold off “chunks of stock” ahead of reporting the results, the Wall Street Journal first reported. “Securities lawyers and accountants say such trades raise questions about the company’s internal controls,” the report says.

Five executives in total, also including the company’s former CFO, sold more than $8 million in stock over three days in February. Chuan “John” Vo, who oversees the company’s propulsion division, sold 99.3% of his vested equity. He reaped proceeds of $2.5 million while keeping just 717 shares of stock. President Rich Schmidt sold 39% of his vested equity over two days in February for $4.6 million, the Journal notes. He used some of those proceeds to expand “a turkey-hunting farm in Tennessee”, a company spokesman said.

Mr. Schmidt and his wife also made a $519,000 land purchase at the time, property records show. A website for Rainbow Rock Farm shows it offers turkey hunting, Black Angus beef, hay rides and blueberry picking on 363 acres of land in Tennessee. The Lordstown Motors spokesman said Mr. Schmidt’s wife runs the farm. She couldn’t be reached for comment.”

Max Magee, an analyst at InsiderScore, told the WSJ: “We wouldn’t expect insiders to typically sell at that time in the quarter.”

Daniel Taylor, an accounting professor who runs the Forensic Analytics Lab at the University of Pennsylvania’s Wharton School, added: “At best, it suggests the company has weak internal control over the trading of their officers.”

It has not been a good look for Lordstown Motors lately. Recall, just days ago we pointed out when the company again lied about having binding orders for its trucks.

After the company’s CEO Steve Burns resigned last week in the face of a special investigation which found the company made “inaccurate” disclosures about its pre-orders, it just took literally one day for the company to lie again about its orders. On Tuesday of last week, when a headline broke that Lordstown had “binding” orders, we asked whether everyone at the company lies.

Does everyone at this company lie?

Apparently, that answer was yes. Because on Thursday morning, Lordstown was forced to correct itself in a filing with the Securities and Exchange Commission. Tucked into a Form 8-K that looked as though it was just to accompany the announcement of the hiring of a new VP of Global Commercial Operations, the company admitted statements its President made earlier in the week (and that boosted the stock) were inaccurate:

To clarify recent remarks by company executives at the Automotive Press Association online media event on June 15, although these vehicle purchase agreements provide us with a significant indicator of demand for the Endurance, these agreements do not represent binding purchase orders or other firm purchase commitments. As previously disclosed in our Form 10-K/A for the year ended December 31, 2020, filed with the Securities and Exchange Commission on June 8, 2021, to date, we have engaged in limited marketing activities and we have no binding purchase orders or commitments from customers.

Recall, just one day prior to the comments, Lordstown’s CEO Steve Burns had resigned, along with the company’s CFO, following the results of an internal investigation catalyzed by allegations by short seller Hindenburg Research back in May.

As one social media user succinctly put it:

In a PR called “Lordstown Motors Announces Leadership Transition” our last week, the company said the executive shuffle was due to a “transition from the R&D and early production phase to the commercial production phase of its business.” But in a separate PR called “Lordstown Motors Reports Results Of Special Committee Investigation Of Hindenburg Research Report”, the company released the findings of Sullivan & Cromwell LLP,  who was tasked with looking in Hindenburg’s allegations.

“Lordstown Motors made periodic disclosures regarding pre-orders which were, in certain respects, inaccurate,” the PR reads.

First, the company admitted that some of its pre-orders were to “influencers”.

“Lordstown Motors has stated on several occasions that its pre-orders were from, or “primarily” from commercial fleets. In fact, many pre-orders were obtained from (i) fleet management companies or other end users that indicated interest in purchasing Endurance trucks, similar to commercial fleets, and (ii) so-called “influencers” or other potential strategic partners that committed to attempt to secure pre-orders from other entities, but did not intend to purchase Endurance trucks directly. 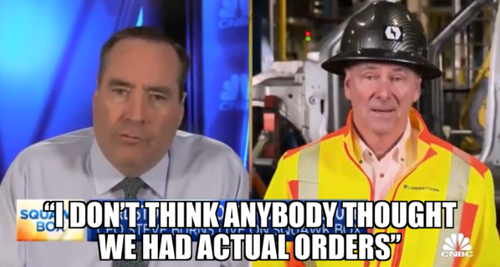 Recall, Lordstown was the target of short seller Hindenburg Research back in May of this year, who released a report called “The Lordstown Motors Mirage: Fake Orders, Undisclosed Production Hurdles, And A Prototype Inferno”.

Hindenburg also released a video called “The Lordstown Motors Mirage” with their report: