Mapping The Countries With The Highest Risk Of Flooding

Devastating floods across Pakistan this summer have resulted in more than 1,400 lives lost and one-third of the country being under water.

This raises the question: which nations and their populations are the most vulnerable to the risk of flooding around the world?

Using data from a recent study published in Nature, Visual Capitalist’s Niccolo Conte and Christina Kostandi created this graphic that maps flood risk around the world, highlighting the 1.81 billion people directly exposed to 1-in-100 year floods. The methodology takes into account potential risks from both inland and coastal flooding. 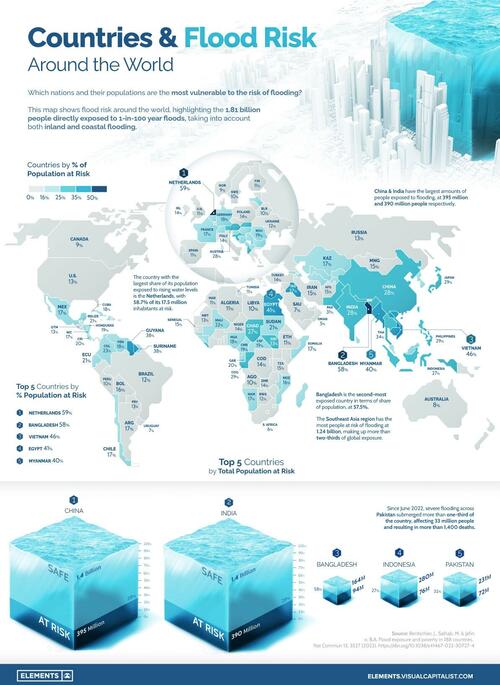 Asian Countries Most at Risk from Rising Water Levels

Not surprisingly, countries with considerable coastlines, river systems, and flatlands find themselves with high percentages of their population at risk.

The Netherlands and Bangladesh are the only two nations in the world to have more than half of their population at risk due to flooding, at 59% and 58%, respectively. Vietnam (46%), Egypt (41%), and Myanmar (40%) round out the rest of the top five nations.

Besides the Netherlands, only two other European nations are in the top 20 nations by percentage of population at risk, Austria (18th at 29%) and Albania (20th at 28%). 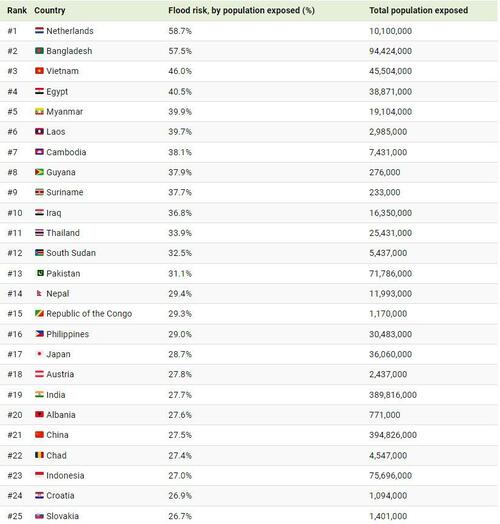 The Southeast Asia region alone makes up more than two-thirds of the global population exposed to flooding risk at 1.24 billion people.

While forecasted climate and natural disasters can often take years to manifest, flooding affected more than 100 million people in 2021. Recent summer floods in Pakistan have continued the trend in 2022.

With 31% of its population (72 million people) at risk of flooding, Pakistan is particularly vulnerable to floods.

The Cost of Floods Today and in the Future

A recent report forecasted that water risk (caused by droughts, floods, and storms) could eat up $5.6 trillion of global GDP by 2050, with floods projected to account for 36% of these direct losses.

As both human and economic losses caused by floods continue to mount, nations around the world will need to focus on preventative infrastructure and restorative solutions for ecosystems and communities already affected and most at risk of flooding.

2 hours ago
‘Many Turn To Christ At Queen’s Funeral’

2 hours ago
‘Many Turn To Christ At Queen’s Funeral’