Throughout history, it was typical to see both birth and death rates at higher levels. But today, as Visual Capitalist’s Avery Koop details below, in most parts of the world, women are having fewer children, and innovations in healthcare and technology mean we are all living longer. The average person today lives to 72.6 years old, while the rate of births per woman has fallen to 2.5.

These trends have drastically altered the demographics of mature economies, resulting in a much older population. In many developing countries, however, births still outweigh deaths, resulting in populations that skew younger.

This visualization uses data from the World Bank to examine the countries with the highest shares of old and young people. 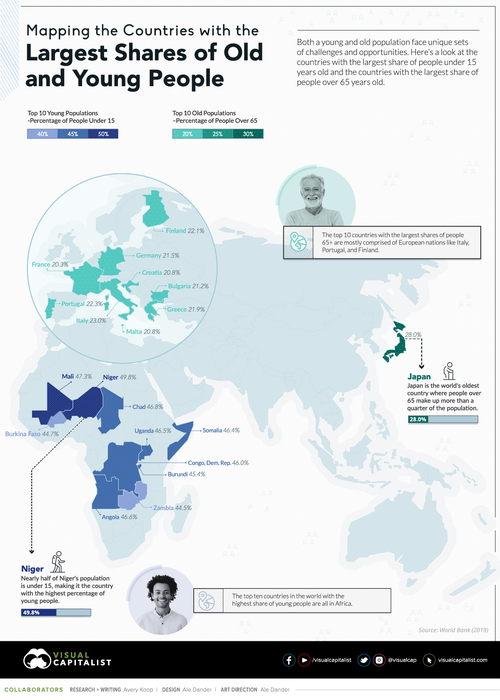 The Fountain of Youth

By 2030, the United Nations estimates there will be 1.3 billion people on the planet between the ages of 15-24. Proving to be a fountain of youth globally, the continent of Africa boasts the top 10 countries with the largest shares of young people in the world.

Somalia, Zambia, and the DRC are just a few to crack the top 10 list. The youngest country in the world is Niger, where almost 50% of the population is below the age of 15.

Here’s a full list of global countries, sorted by percentage of population under 15 years old:

Young countries have significant opportunities ahead of them. A younger population means a larger upcoming workforce and more opportunities for innovation and economic growth.

While domestic markets in Africa grow in terms of labor supply, innovation, and potential consumers, there are also challenges that arise in these countries. Corruption, political instability and unemployment, particularly in Africa, are all potential barriers to prosperity for the continent’s Gen Z population.

The world’s oldest country is Japan, where 28% of the population is older than 65. However, it’s an anomaly – the rest of the oldest countries in the top 10 are all in Europe.

Globally, it’s the 65+ age group that is growing the fastest. According to the same UN estimates, it is predicted that by 2050 that one in six people will be over 65 years old.

Here’s a full list of global countries, sorted by percentage of population over 65 years old:

Fewer births, and a resulting older population, is a trend attributed to the changing lifestyles of women. For example, Japan’s fertility rate has fallen to less than 1.5 children per woman due to modern access to contraceptives and the prioritization of work over marriage and family life.

However, fewer young people also means a smaller workforce on the horizon and a shrinking domestic market. There is also a rising social cost of caring for the elderly, as longer lifespans have resulted in a higher prevalence of chronic diseases and an increasing inability to care for oneself. This can result in an increased tax burden on the diminishing younger, working population.

Another Perspective on the Data

Looking at the data from the opposite angle also reveals information about our world. Here’s a look at the countries with the lowest proportions of younger or older people. 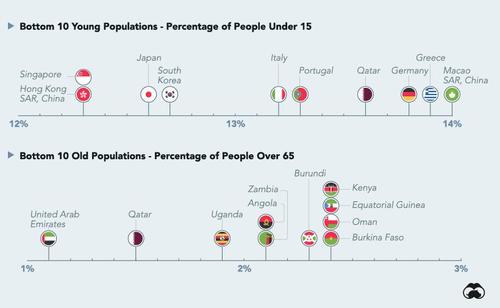 Hong Kong and Singapore have some of the lowest fertility rates in the world (1.1), so it’s no surprise to see low numbers of children in their demographic data.

In a country like the United Arab Emirates, the majority of the population is made up of foreign workers, so the number of people in the 65+ age group is extremely low. In the coming decades though, the situation is expected to shift dramatically with one in every five Emiratis residing that age group by 2050.

While each country has its own unique demographic make up, one thing is clear. As education and wealth levels rise around the world, fertility rates are dropping almost everywhere.

The trend of long life expectancies and fewer births is likely to continue, but young outliers will remain and they present immense economic potential.