Authored by Mark Cudmore via Bloomberg,

Investor positioning and sentiment going into Jackson Hole is far more balanced than many would have you believe.

One conclusion from this is that markets are ready to react cleanly to whatever Jerome Powell says. The history of the past few months, however, would suggest that this market has a particularly refined ability of selective hearing, and may instead run with what it wants to get excited by.

There’s been quite a bit of chatter about how traders have positioned so aggressively for a hawkish message this weekend and, therefore, US yields and the dollar are primed to fall afterwards. 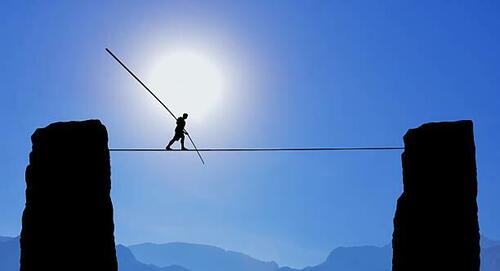 It’s not just rates — everyone seems to think that dollar bullishness is stretched.

In summary, the market is slightly positioned toward hawkishness and long dollar, but not dramatically so, especially given the energy crisis the European continent is facing.

For what it’s worth (little?), I expect Powell to reiterate that they are data dependent and not try to unduly influence front-end pricing, while also emphasizing the dangers of inflation becoming entrenched and that the Fed can’t get complacent.

There’s a small probability priced that he goes uber-hawk. If that doesn’t transpire, there may be some short-term relief. But it’s a very small probability, and the front-end relief would soon be overtaken by the pricing out of next year’s pivot.

None of this would be new. That won’t stop a fresh narrative being created next week.