China successfully launched a key module of a new space station Thursday using the latest version of the Long March 5B heavy-lift booster. After completing its mission, the core stage of the rocket is still in orbit and could make an uncontrolled re-entry in the near term, according to SpaceNews.

The Long March 5B uses a core stage and four side boosters to launch heavy payloads into low Earth orbit. The rocket carries the payload up to orbit instead of separating at a lower altitude. This means that the Long March 5B booster is now uncontrollably tumbling back to Earth. 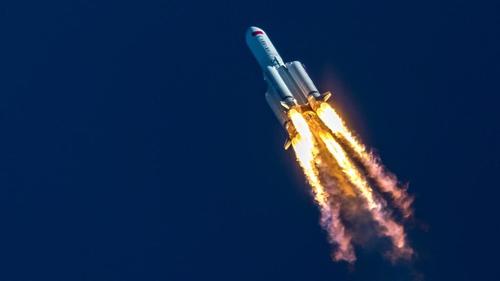 US military radars have detected the object and classified the rocket body as “2021-035B.” It’s a massive rocket body measuring more than 30 meters long and 5 meters wide, weighing 21 metric tons. The speed of the object is traveling at more than seven kilometers per second.

Jonathan McDowell, an astrophysicist at the Harvard–Smithsonian Center for Astrophysics, suggested the rocket is not under control as it makes its way back to Earth.

Still no TLEs for the Vega launch. One more TLE for object B from the Tianhe launch, whose slow decay rate confirms it is the CZ-5B core stage pic.twitter.com/0dVkUkcpjA

This is the second launch for the Long March 5B, and the first occurred on May 5, 2020. Back then, the booster orbited for six days then shortly after made an uncontrolled re-entry.

“Where and when the new Long March 5B stage will land is impossible to predict. The decay of its orbit will increase as atmospheric drag brings it down into more denser,” said SpaceNews.

So, for now, look out above as an uncontrolled re-entry of a massive rocket plummets back to Earth could occur in the coming days.