A massive fire has broken out at a northern Taiwan logistics center for the 8th largest retailer in the world. 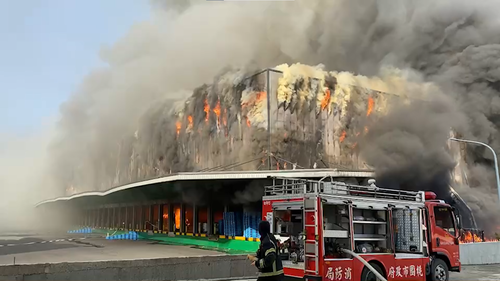 According to Taiwan News (citing CNA), officials in the northern Taiwan city of Taoyuan received a report early Monday of a massive blaze at the warehouse in the city’s Yangmei District at the Carrefour Logistics Center.

73 firefighters, 23 fire trucks, 8 tanker trucks and 4 ambulances were dispatched to the scene, where according to reports, nobody has been trapped in the facility.

According to the fire department, the fire appears to have started on the first floor of the two-story structure. There are no hazardous items believed to be inside.

The entire facility is currently engulfed in flames, and smoke can be seen billowing into the sky from several kilometers away. An investigation into the cause of the fire and damage assessment are currently underway. –Taiwan News

Carrefour, a French multinational that emphasizes in hypermarkets, confirmed that a fire had broken out, but all personnel were immediately evacuated and there were no injuries.

With pundits speculating that Taiwan could be the next geopolitical hotspot after Ukraine – for various obvious reasons – any local accidents will prompt heightened interest whether foul play may be involved.