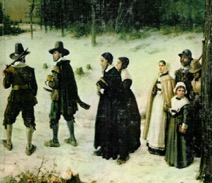 The Pilgrims were mainly English Dissenters who attended churches that did not belong to the Church of England. One objection they held was to any monarch being head of the church. This viewpoint was contradictory to an English law stating that if “any of Her Majesty’s [Queen Elizabeth I] subjects deny the Queen’s ecclesiastical supremacy…they shall be committed to prison without bail.”  Years of enduring government persecution led the Pilgrims to “[shake] off this yoke of anti-Christian bondage” and move to Holland, where they found religious toleration. After 12 years in Holland they decided to move to America where they could freely worship God, raise Godly children, and share the Christian Gospel with others.

They arranged for two ships to carry them to America: the Speedwell and the Mayflower. But the Speedwell developed leaks in two separate departure attempts and was sidelined. The Mayflower alone set sail for America in September 1620 with 102 “Pilgrims and strangers” (1 Peter 2:11, from which the Pilgrims took their name). It took 66 days for the Pilgrims on the Mayflower to reach America. 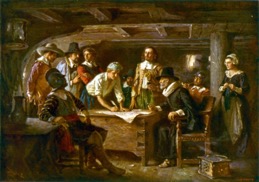 (Their trip across the Atlantic was treacherous, with constant storms. In fact, at one point the main beam of the ship broke. Not having the tools necessary to make the repairs, the ship’s crew used the large jackscrew of the Pilgrims’ printing press to raise the beam into place where it could be secured – thus saving the ship and the lives of those on board.)

Having undertaken for the glory of God and advancement of the Christian faith, and the honor of our king and country, a voyage to plant the first colony in the northern parts of Virginia, do by these presents [that is, by this legal document and charter] solemnly and mutually, in the presence of God and one of another, covenant and combine ourselves together into a civil body politic…

This document — signed on November 21, 1620 (November 11 by the old calendar) — became known as the Mayflower Compact. It became the first purely American document of self-government that (to borrow words later employed by Abraham Lincoln) was “of the people, by the people, and for the people.” (America’s other governing documents had been written in England by English officials in order to govern the Americans.) Additionally, the Pilgrim’s document placed American self-government firmly on a Christian foundation. The Mayflower Compact is definitely worth being honored.