McAfee Lawyer Saw No Sign Of Suicidal Intent, Blames Death On “Cruelty Of The System”

Update (6/4/21 1630ET): A court spokeswoman for the Catalonia region told the Associated Press on Thursday that a forensic team would need to perform toxicology tests on McAfee’s body to determine the cause of death and that results could take “days or weeks.” Authorities have said that everything at the scene indicated that the 75-year-old tycoon killed himself. 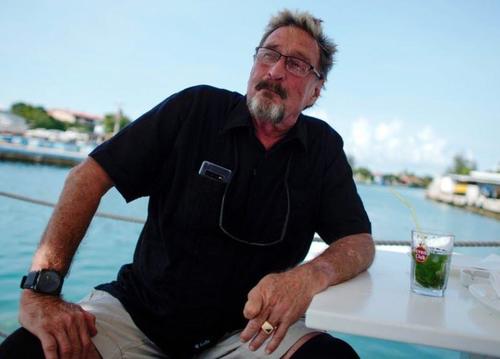 Javier Villalba, a Spanish lawyer representing McAfee told AP on Thursday that the antivirus software executive’s death came as a surprise to his wife and other relatives. Villalba added that he would seek to get “to the bottom” of it.

“This has been like pouring cold water on the family and on his defense team,” Villalba said.

“Nobody expected it, he had not said goodbye.”

Villalba told Reuters on Thursday that he “had constant telephone contact” with McAfee and “at no point had he shown any special worry or clue that could let us think this could have happened.”

Villalba added that McAfee’s death was particularly painful “because it was not justified under any circumstance that this man remained in the jail.”

A court in Martorell, a town northwest of Barcelona with jurisdiction over the prison where McAfee died, is handling the judicial investigation.

As NYPost reports, John McAfee’s wife publicly claimed that the US wanted the software tycoon to “die in prison” – just three days before he was found hanged in his cell.

Janice McAfee made the sadly prophetic statement Sunday in a Father’s Day post while her husband was in a Spanish jail awaiting extradition to the US to face federal tax evasion charges. 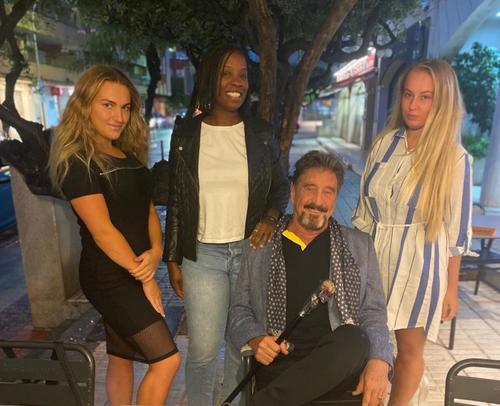 While Villalba acknowledged he has no evidence of any foul play, he blamed McAfee’s death on “the cruelty of the system” for keeping him behind bars for economic and not blood related crimes and refusing to release him on bail.

As The FT noted in its obituary, to many, McAfee’s nomadic life had descended into paranoia, violence and grifting.

But to the friends and fans to whom he addressed his campaign video, he was an anti-establishment hero — whose fears around technology-enabled government surveillance and financial institutions reflected growing mistrust of authorities today.

“He always dreamt of building an alternative internet that wouldn’t have all the flaws and problems that the current internet has,” said Kim Dotcom, an internet entrepreneur and friend who himself is accused of masterminding one of the largest copyright infringements in history.

In McAfee’s own words, per his Twitter biography, he was an “iconoclast” and a “lover of women, adventure and mystery”.

The FT concludes by noting that even in death, McAfee was remarkable at sparking a media frenzy.

Around the time of his death on Wednesday, a post appeared on his Instagram that simply showed the letter “Q” — an apparent reference to conspiracy cult QAnon, sparking its own wave of conspiracies.

“All power corrupts,” he wrote in his final Twitter message on Friday. “Take care which powers you allow a democracy to wield.”

Update (1615ET): McAfee’s lawyer has confirmed to ABC News that his client was found dead in a Spanish jail cell on Wednesday.

The 75-year-old entrepreneur was arrested on tax evasion charges for failing to file tax returns for four years. He has been in jail in Spain since Oct. 6, facing charges that he hid significant assets which included real estate and a yacht. His defense lawyers had argued that the extradition request was politically motivated and therefore wasn’t appropriate. He disagreed with the current monetary system, which has made him “public enemy No. 1,” according to court documents released on Wednesday.

The US calculates that McAfee owed more than $4.2 million in taxes, the documents show.

The ruling came as the latest setback for McAfee but it wasn’t the start of his legal troubles. In March, the SEC accused him of hiding cryptocurrency income of more than $23MM. Manhattan US Attorney Audrey Strauss has said McAfee “exploited a widely used social media platform and enthusiasm among investors in the emerging cryptocurrency market to make millions through lies and deception.”

Update (1530ET): Just after Spain’s National Court approved a request for his extradition back to the US, where he faced the prospect of dying in a jail cell, Spanish newspaper El Pais reported Wednesday evening that John McAfee committed suicide in his cell, dying at the age of 75.

He was being held in a prison in Barcelona. So far, initial evidence of his death, which occurred Wednesday afternoon, local time, points to suicide.

He was initially arrested by Spanish authorities on Oct. 3, 2020 at the El Prat airport, just as he was about to take a plane to Turkey. He was arrested at the behest of the US, where he is wanted for evading millions of dollars in taxes. Spanish judge José de la Mata reportedly ordered his arrest. 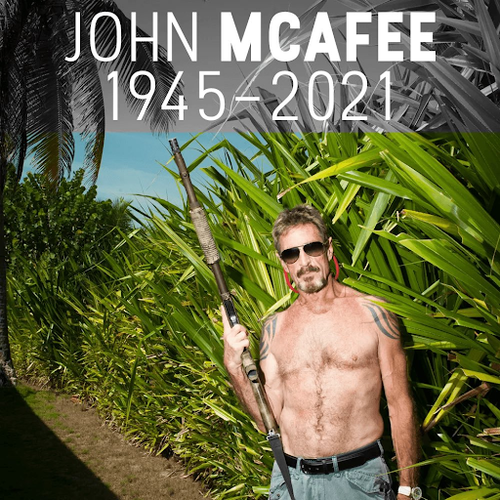 In the last tweet sent from an account tied to McAfee, the cybersecurity software pioneer warned that “all power corrupts.” In recent weeks, his tweets seem to have become increasingly hopeless.

In a democracy, power is given not taken.

But it is still power.

Love, compassion, caring have no use for it. But it is fuel for greed, hostility, jealousy…

Take care which powers you allow a democracy to wield.

One of McAfee’s tweets from 2019 featured a cryptic warning about the eccentric founder, he made a fortune off his eponymous security software then squandered it, potentially being “suicided” by the US government.

Getting subtle messages from U.S. officials saying, in effect: “We’re coming for you McAfee! We’re going to kill yourself”. I got a tattoo today just in case. If I suicide myself, I didn’t. I was whackd. Check my right arm.$WHACKD available only on https://t.co/HdSEYi9krq🙂 pic.twitter.com/rJ0Vi2Hpjj

He sent another tweet with a similar message about being “Epsteined” a year later.

The food is good. All is well.

Know that if I hang myself, a la Epstein, it will be no fault of mine.

We can’t help but wonder whether ‘conspiracy theories’ about the circumstances of his death will emerge in the coming weeks like they did after the in-prison suicide of another notable American.

Antivirus software pioneer John McAfee may die in a US prison, after Spain’s National Court approved an extradition request by the United States to face tax-related criminal charges which carry a sentence of up to 30 years if convicted.

The 76-year-old McAfee has been charged by Tennessee prosecutors with evading taxes after failing to report consulting income he received while promoting cryptocurrencies, along with income from speaking engagements and the rights to his life story as a documentary, according to MarketWatch.

Last week, McAfee tweeted “I have nothing. Yet, I regret nothing.”

The US believes I have hidden crypto. I wish I did but it has dissolved through the many hands of Team McAfee (your belief is not required), and my remaining assets are all seized. My friends evaporated through fear of association.

Yet, I regret nothing.

The charges apply to income received between 2014 and 2018. He was arrested last October at Barcelona’s international airport, after which a judge ruled that he should be held in jail while awaiting the results of his extradition hearing.

Earlier this month, McAfee argued in a videolink hearing that charges against him are politically motivated, and that he would die in prison if he was returned to the US.

McAfee’s life behind bars appears to be one of contemplation, as he regularly tweets messages with tones that switch between sorrow, acceptance for his circumstances, mixed in with sparks of aggression towards the U.S. governing bodies.

In the June 9 tweet, he notes that “after uncountable lawsuits and the reach of the FED’s I now have nothing. But inside these prison bars I have never felt more free. The things you believe you own, in reality own you.”

I have a million followers but I’d be surprised if even 1% bother to read my tweets.

As you may guess I’m having a down day.

It is a stark contrast to McAfee’s earlier years in which his net worth grew to $100 million from his successful anti-virus software firm. McAfee used to own a mansion worth more than $5 million in Colorado Springs, and even lived on a luxury yacht out in Dominican Republic waters, which he dubbed a “freedom boat.”

According to the June 2020 indictment from the Justice Department’s Tax Division and Tennessee prosecutors, McAfee faces a minimum of five years on each count of tax evasion and a one-year minimum on each count of willful failure to file a tax return. –CoinTelegraph

There is much sorrow in prison, disguised as hostility.

The sorrow is plainly visible even in the most angry faces.

I’m old and content with food and a bed but for the young prison is a horror – a reflection of the minds of those who conceived them.