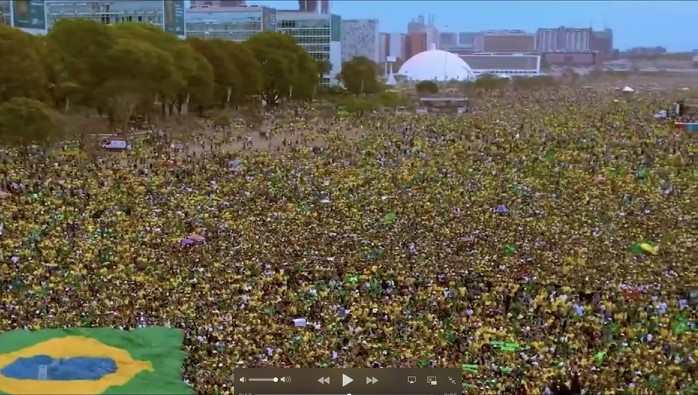 While Americans continue to grumble about the elections stolen in Arizona and elsewhere, the blackout news media refuse to cover it – with the notable exception of WND, Gateway Pundit and Real America’s Voice

But our neighbor to the south, in Brazil, haven’t left the streets for weeks because of the electoral cheating that has taken place there.

Brazilians packed the streets in admirable civil protest again Nov. 13, on Republic Day – to the tune of over 3 million people.

In fact, the party of President Jair Bolsonaro presented its report on the Really Big Steal, announcing it will apply to have the election annulled since the results could not be validated.

Since the massive fraud during the runoff election on Oct. 30, millions of Brazilians have been protesting on the streets every day against fraud by communist convicted criminal Luiz Inácio Lula da Silva, the supposed winner.

Notable demonstrations have taken place in Rio de Janeiro and the capital, Brasilía, but also in smaller towns across the country.

When Rio newspaper O Globo refused to report on what may be the largest protests the world has ever seen, it fueled even more rage and disappointment among the Brazilian people.

“I’m no expert on the history of protests, but I think these may be the biggest protests the world has ever seen,” Brazil expert Fernando Teles told German website Free World. “People are very angry. That isn’t really like the Brazilians at all, who are usually pretty laid back.”

According to Teles, over 3 million people demonstrated in Brasilía, although the capital is very difficult to reach and people often have to travel several days to get there. In Rio de Janeiro, approximately 500,000 protested in front of the old Ministry of Defense, demanding military intervention to prevent the communists from taking power.

Demonstrators complained that at least 100 of the electronic ballot boxes did not contain a single vote for Bolsonaro and that 5 million votes were discarded. Allegedly, Lula won 50.9% of the vote and Bolsonaro 49.1%.

Last week, Minister of Defense Paulo Sergio Nogueira de Oliveira sent his report on possible election fraud to the radical leftist Supreme Electoral Court, which consists of diehard Lula supporters. The military’s report spoke of “relevant security risks”: “It is not possible to say the electronic voting system is free from the influence of malware that could affect its outcome,” says the report. The court is expected to ignore the report.

In Brazil, only a party involved in the election can contest the result.

According to Teles, Bolsonaro and the military leadership are making every effort to follow the law and the rules of democracy. Meanwhile, protesters are already demanding military intervention, with chants of “Forças armadas, salvam nossa pátria!” (Armed Forces, Save Our Country!).

“The funny thing is, although they say they won the majority in the election, there are no protests by Lula supporters,” Teles said. “Where are they?”

Although, Brazil is a sizable democracy, at 214 million, it was supposedly taken over by Lula, a strong supporter of Communist China. One the same day as the election, Joe Biden quickly praised Lula.

“I send my congratulations to Luiz Inácio Lula da Silva on his election to be the next president of Brazil following free, fair and credible elections,” he said. “I look forward to working together to continue the cooperation between our two countries in the months and years ahead.”

That sounds about right. There are plenty of deals for Hunter to make down there.

Even before Election Day, Biden had a not-so-subtle message for Bolsonaro: According to Foreign Policy magazine, “Over the past year, U.S. President Joe Biden has deployed top administration officials to meet with their Brazilian counterparts and convey a simple message to President Jair Bolsonaro: Don’t derail Brazil’s democracy.”

In other words, the fix was in.

China is making a great deal of progress in Latin America.

According to the Council on Foreign Relations, “China’s role in Latin America has grown rapidly since 2000, promising economic opportunity even while raising concerns over Beijing’s influence. China’s state firms are major investors in the region’s energy, infrastructure, and space industries, and the country has surpassed the United States as South America’s largest trading partner. Beijing has also expanded its diplomatic, cultural, and military presence. Most recently, it has leveraged its support in the fight against COVID-19, supplying the region with medical equipment, loans, and hundreds of millions of vaccine doses.”

The Council on Foreign Relations is a Deep State mouthpiece.

Further, Bolsonaro was a friend of President Trump – so of course he had to go.