After two stellar auctions earlier this week, when buyers just couldn’t get enough of US paper, moments ago in the week’s final auction, the Treasury sold $24 billion in 30Y paper (in the form of a 29-Y 11-month reopening of Cusip SX7), to mixed demand.

Yet while these two metrics were mediocre at best, it was the surge in Indirects that surprised to the upside, with 64.0% of the auction going to foreign buyers, i.e. Indirects, a big jump from last month’s 59.9% and the highest since January (the six auction average is 62.7%). The rest was split almost equally between Directs and Dealers (18.0% and 17.9% respectively).

Overall, a mediocre auction yet one which could have been far uglier (recall the Feb 7Y auction?) considering today’s red hot CPI print, one which the market continues to dismiss as merely transitory until proven otherwise. 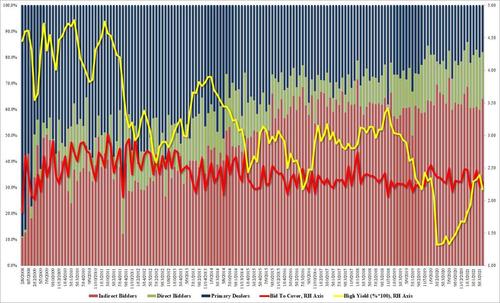