Not long after Toufic Baaklini settled a case with the Justice Department involving illegal campaign donations to members of Congress, a Republican lawmaker took more contributions from him.

An associate of the Nigerian-born billionaire at the heart of a scandal threatening to bring down Rep. Jeff Fortenberry (R-Neb.), Baaklini agreed to pay $90,000 and cooperate with investigators in a case the DOJ settled in March 2021. This year, he made two separate $1,000 contributions to Rep. Scott Perry’s campaign — one on the same day the agreement became public, according to federal records.

Those donations, while not the focus of a recent indictment against Fortenberry, underscore how eager members of congress often are to raise money, even when there are red flags around it. They also add a layer of intrigue to a story of global influence peddling involving an embattled Nigerian billionaire and a sitting member of Congress whose future in the chamber is now in peril.

Baaklini’s LinkedIn page lists him as the president of In Defense of Christians, a group that the embattled billionaire Gilbert Chagoury says he “instigated and funded.” Chagoury is a controversial businessperson, ambassador and self-styled international diplomat who has been sending money to different political causes for years. But his actions landed him in hot water when he was accused of illegally sending money through intermediaries, such as Baaklini, to U.S. officials, including Fortenberry, not long after coordinating a lobbying campaign for the Nigerian government.

The feds ultimately indicted Fortenberry on Wednesday on charges that he lied to the FBI about his knowledge of the origins of those donations. Fortenberry pleaded not guilty and was ordered to put up $50,000 in bond. His trial has been scheduled for December.

At a hearing in Los Angeles on Wednesday, during which Fortenberry appeared via video conference, his lawyer continued to deny the charges. He said that he intended to move to dismiss the case, suppress Fortenberry statements “because he was misled” and to disqualify the prosecutor on this case “because he, in fact, is going to be a witness.”

A longtime lawyer for Chagoury, who represented him in the recent case, said he could not comment on a former client. Baaklini also did not return a request for comment via LinkedIn. A spokesperson for Fortenberry declined to comment.

Perry, a California Republican, faces no such charges. His campaign said it returned the donations when the congressman “was made aware of the charges against Mr. Baaklini.” The Federal Election Commision website has no record of the return yet. The campaign said the returns would be reflected in his Jan. 2022 disclosure.

Baaklini, ultimately, was a middleman for Chagoury, who spent years cultivating a presence in the American political scene despite a series of controversies that among other things have at one point earned him a spot on the no-fly list. The Clinton Foundation counts Chagoury as a major donor, having given between $1,000,001 and $5 million. According to his own lawsuit, he has given millions to the Clinton Global Initiative. Documents released by the conservative activist group Judicial Watch ahead of the 2016 election showed that a Clinton Foundation official pushed a senior aide to then-Secretary of State Hillary Clinton to arrange a conversation between Chagoury and an Obama administration official. It’s unclear if that conversation happened.

Chagoury targeted other Obama administration officials too, including former Secretary of Transportation Ray LaHood who admitted accepting a $50,000 check from Baaklini in 2012, despite knowing the money came from Chagoury. LaHood did not report the check because he did not want to be associated with the controversial billionaire, the Department of Justice said. He later agreed to cooperate with investigators and repaid the $50,000 to Baaklini.

In a 2016 lawsuit against the F.B.I. and other government agencies, lawyers for Chagoury note that the billionaire was denied a visa by the State Department because officials believed he had provided “material assistance” to terrorism. However, he claimed that this decision was based on false information, an “injustice” that was compounded by an agent leaking the intel to the Los Angeles Times. In his complaint, Chagoury claims that he has been cleared to “socialize with many current and former officials, including President William J. Clinton.”

Chagoury later struck a deal in which the government acknowledged he’s never been on a U.S. sanctions list.

It’s not immediately clear to what end Chagoury sought with his access to American politicians. But Foreign Agents Registration Act records provide some insight into his advocacy.

Around 2015, Chagoury enlisted D.C. power brokers to promote Nigerian president Goodluck Jonathan, who was running for reelection and has since faced charges of corruption. Chagoury brought on the firm run by Republican crisis communications operative Mark Corallo, who later went on to become a spokesperson for Donald Trump’s legal team. Corallo’s firm brought on several additional firms to handle public relations or arrange meetings between lawmakers and Hill aides and members of Jonathan’s administration, according to FARA filings. All meetings were canceled due to inclement weather besides one with Rep. Chris Smith (R-N.J.). Baaklini donated $1,000 to Smith’s campaign in October 2019, after the investigation into Chagoury’s scheme had begun but before any results of the investigation, or the existence of it, had been made public.

Corallo’s firm also brought on 4ImpactLLC, which is listed as Baaklini’s employer in disclosures to the Federal Election Commission, to liaise with Chagoury. NWG Public Affairs, a firm led by former Rep. Jerry Weller arranged meetings on Capitol Hill. Weller serves on In Defense of Christians’ Congressional Advisory Board, according to the group’s website.

Chagoury has also been linked to the late Sani Abacha, a Nigerian military leader and dictator who also faced corruption charges. The Wall Street Journal reported in 2008 that the billionaire agreed to return funds to the Nigerian government, amid an investigation by the government into corruption during Abacha’s regime. According to a 1997 Washington Post report, he also found his way into a White House holiday dinner during the Clinton administration, months after he gave $460,000 to a DNC-approved voter registration group.

Fortenberry is the only current member legally entangled in the case, but so far he is receiving strong support from his colleagues, who have argued that the GOP congressman is the victim of an ambitious prosecutor, Mack Jenkins of the Central District of California, trying to make a name for himself.

“I haven’t even seen it, but Fortenberry sounds like he got set up,” said Rep. Jim Jordan (R-Ohio), the top Republican on the House Judiciary Committee. “I believe Jeff.”

They also vouched for their colleague’s character.

Rep. Gary Palmer (R-Ala.), a member of GOP leadership, described Fortenberry as “one of the most righteous people” he knows, adding that he is “concerned” for Fortenberry and “shocked” to hear about the indictment.

Despite the charge, Fortenberry appeared for House votes on Monday, shortly after he was indicted. His wife joined him at the Capitol. And his colleagues approached him on the House floor, giving him pats on his shoulder.

Fortenberry’s ties to Chagoury stem from a Feb. 20, 2016 fundraiser in Los Angeles. The indictment does not directly say so, but on the same day that it claims Fortenberry attended the fundraiser, he was pictured at an event in his honor in Glendale, Calif., organized by members of the Southern California chapter of the group In Defense of Christians, according to the group’s website. As recently as 2015, Chagoury was In Defense of Christian’s honorary chair and Corallo, who helped coordinate a media and lobbying campaign on behalf of Chagoury, currently sits on its board of directors.

The group maintains a relationship with members of Congress, who spoke at its recent summit. Rep. Jackie Speier (D-Calif.) and Rep. Gus Bilirakis (R-Fla.) were named the event’s honorary co-chairs. In Defense of Christians’ executive director did not return a request for comment about its ties to Chagoury and the case against its president.

A POLITICO analysis of FEC records previously showed that the individual donations Chagoury made in the past went to other Republicans as well. This includes $100,000 in gifts in 2012 matching those given to a Mitt Romney presidential campaign fund, $30,000 to Rep. Darrell Issa’s 2014 campaign, $10,000 to the 2014 campaign of former Rep. Lee Terry (R-Neb.).

Before he could even be asked if he also received donations from Chagoury, Issa interjected. “No, I don’t have the same issues [as Fortenberry],” he said. “I made no statements to any FBI — or anything else.”

He declined to expand further on the funds he received from Chagoury. “Well,” he said, “I’m not doing an interview.” 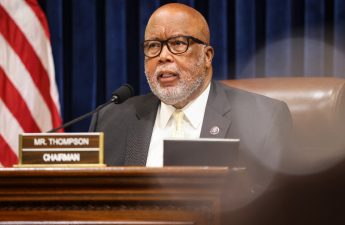 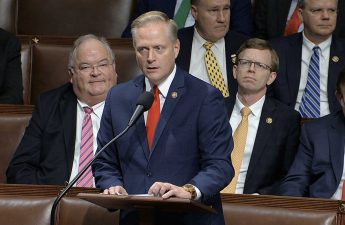 About By Hailey Fuchs and Olivia Beavers

View all posts by By Hailey Fuchs and Olivia Beavers →