The Tokyo Olympics has just reported yet another high-profile COVID case, further cementing the odds that the Games are destined to be declared a “super-spreader event” despite the fact that Tokyo is under a State of Emergency, and spectators have been banned from Olympic events.

This time, an unnamed alternate for the US women’s gymnastics team has tested positive for the coronavirus. It’s not clear what, if anything, that means for the rest of the team, including superstar Simone Biles. USA Gymnastics says they are continuing to prepare for the Games.

“We can confirm that an alternate on the women’s artistic gymnastics team tested positive for COVID-19,” the US Olympic & Paralympic Committee said in a statement to NPR. “In alignment with local rules and protocols, the athlete has been transferred to a hotel to quarantine. Out of respect for the individual’s privacy, we cannot provide more information at this time.”

USA Gymnastics said in a statement that one other alternate is quarantining. The women’s team has 4 alternates: Kayla DiCello, Kara Eaker, Emma Malabuyo and Leanne Wong. It’s not clear how closely the team’s six starting members have trained and lodged with the alternates in Japan.

“On Monday, the Olympic athletes moved to separate lodging accommodations and a separate training facility, as originally planned, and will continue their preparation for the Games,” USA Gymnastics said in a statement to NPR.

The positive test was first reported by Japan’s Kyodo News agency. It said the city of Inzai said the gymnast tested positive at a pre-event training camp in the city.

The COVID-19 protocols for the Games seem to leave the door open for athletes to continue to compete even if they are a close contact of someone with a positive test. It’s decided on a case-by-case basis.. If they are allowed to compete, stricter-than-usual protocols might be implemented, such as “moving to a private room, eating meals alone, using dedicated vehicles, or separation during training and at your competition venue,” according to the athlete’s playbook. 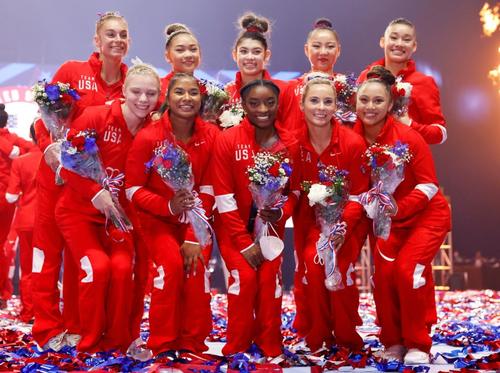 All told, organizers have confirmed at least 58 cases involving athletes so far as the 7-day average of new cases in Tokyo has climbed.

In other news, another top sponsor has pulled out of the Games. Toyota has reportedly abandoned plans to air Olympic-related TV advertisements in Japan and its officials won’t attend the opening ceremony or other events, despite the automaker’s status as a top-tier sponsor, according to Nikkei.

While Tokyo’s overzealous response to the Olympics has left many Japanese wondering why the IOC and domestic organizers are even bothering to hold the Games, the total farce continues as a transgender weight-lifter is cleared to participate in the women’s “super heavyweight” division.