Morgan Stanley told clients on Aug. 11 that “winter is coming” for semiconductors and downgraded the DRAM space and several chip companies such as Micron and SK Hynix. At the time, the bank wrote, “while pricing is still moving higher, the rate of change is approaching peak as supply is catching up to demand.”

Fast forward two months, the bank’s cycle indicator was spot on by shifting out of “midcycle” to “late-cycle.” Now DRAM prices have rolled over and are in a correction. The bank believes the DRAM market will stay fundamentally oversupplied in 2022, exacerbated by inventory builds. 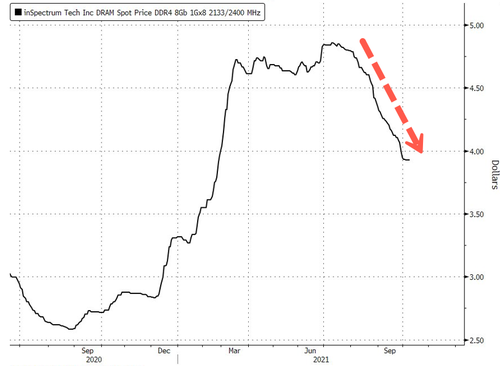 Adding to Morgan Stanley’s view (the full MS report can be found in the usual place for Pro subs.) is the world’s fourth-largest memory maker, Taiwan’s Nanya Technology, who recently predicted a DRAM price “correction” in late 2021.

Declining DRAM prices are good news for those in the market for servers and could make next year’s smartphone models a little cheaper or more memory-generous.

While DRAM prices are in a correction, NAND prices appear to be peaking as well. 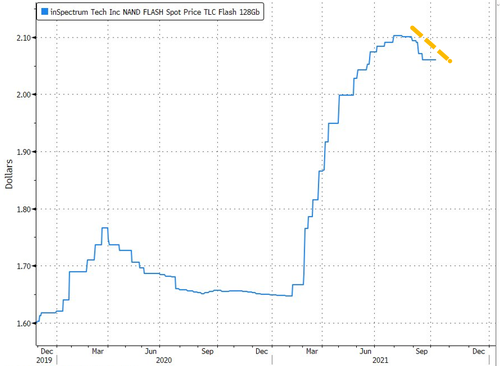 According to Bloomberg data, 2-month forward earnings estimates for Samsung Electronics, Micron, and Intel have slumped. Shares of iShares Semiconductor ETF (SOXX) have fallen into a correction in recent weeks, down 12%. 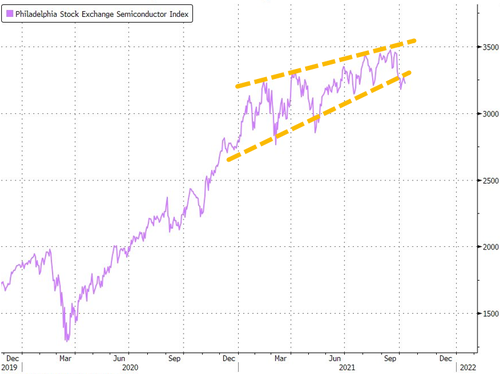 “Even though many of them have had revenues surge to all- time records, the stocks have not followed suit,” said Susquehanna analyst Christopher Rolland. “That tells me that at this point, some of this consternation is baked into shares more broadly.”

Morgan Stanley’s and Nanya’s statements are similar to reports from DRAMeXchange and Gartner, who have also warned about a significant price reduction in memory chips prices due to oversupplied conditions.