By Greg Miller of FreightWaves,

Multi-month container-ship charters continue to be signed at jaw-dropping rates above $100,000 per day. The market is getting even tighter, pushing charter rates and durations higher still. Even so, there’s something to be said for shipowners taking a few chips off the table — and some are. To quote American financier Bernard Baruch: “I made my money by selling too soon.” 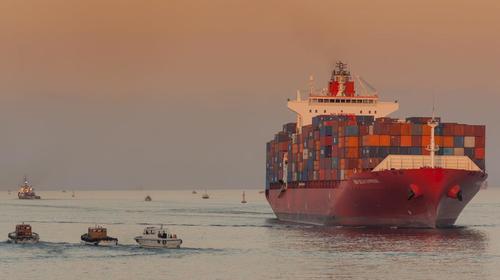 Shipowner executives participating in the Marine Money Week virtual conference on Wednesday discussed the historic strength of today’s container-ship chartering market and how this unprecedented boom could end.

There was zero talk of a slowdown in 2021. But there was talk of uncertainty further out, particularly in 2023. For shipping stock traders, what happens two years from now doesn’t matter. For shipowners who are in the family business for life, it does.

Speaking on the Marine Money panel, Symeon Pariaros, chief administrative officer of Euroseas (NASDAQ: ESEA), pointed to “owners taking very short-duration charters at stratospheric levels.” He cited a ship of the same size as the CO OSAKA getting $90,000 per day in recent weeks.

Constantin Baack, CEO of MPC Container Ships (Oslo: MPCC), revealed a new deal that sounds like a record in terms of dollars per day per TEU of ship capacity.

“The new normal for vessels of up to 5,000 TEUs is a charter duration of two to four years. If you go shorter you get a significant premium. If you have the right vessel in the right place you can get astronomical rates in the short term,” he said.

“We have fixed about 30 vessels already this year and we have another 26 coming up [for charter renewal], so we know pretty well where the market stands,” said Baack. “What we’ve seen is that over the last five weeks alone, it has really skyrocketed, both on periods and rates, and there’s no end in sight. There’s no reason to be pessimistic for the next couple of quarters.

“There are almost no ships available,” he emphasized. “And very importantly, the difference compared to the last 12 years, especially in the smaller-ship segments, is the long-term charters.” When ships are leased for multiple years, they’re out of the market until their charters expire. Consequently, “the market will dry out even further,” said Baack.

Some owners still opt to sell

With charter rates at unprecedented levels, why are some players still selling their ships?

Earlier this month, U.K.-based Borealis Finance sold 12 vessels to Global Ship Lease (NYSE: GSL) for $232.9 million. In an interview with Tradewinds, Borealis CEO Christoph Toepfer explained, “We’re quite optimistic for this market but at some stage it will end. We may have given up some upside, but that’s fine. People sometimes forget that selling is part of a successful investment track record.”

Asked why Capital Product Partners sold the two ships, Jerry Kalogiratos, the company’s CEO, replied, “We achieved record-high prices. When you sell vessels in a market like this, you have to ask: What do you do with the money from the sale compared to what you would have achieved in the charter market, plus residual value risk?

“In our case, the sale unlocked approximately $100 million in equity between the two ships and we can take part of this money and invest in brand new, larger, more energy efficient, more environmentally friendly ships with hybrid scrubbers and increased reefer capacity, [backed by charters for] 10-year employment.

“So, it was really an arbitrage between chartering the ships and selling them and redeploying the money, with the unknown, of course, being what happens in the charter market between the delivery of the vessels to the new owner and the delivery of the replacements.” Judging that unknown is where the medium-term view on the charter market comes in.

How chartering boom could end

“I fully agree that short-term prospects are very strong and the charter market is going from strength to strength,” said Kalogiratos. “But the orderbook is expanding. I don’t think 2022 is at risk but from 2023 onwards, we will have increasing deliveries.

“I also think that a lot of the restrictions on current [vessel] supply come from the impact of COVID. It’s like a game of whack-a-mole. There’s congestion on the West Coast, then Yantian and now in Northern Europe at important terminals like Rotterdam. It seems this is going to continue, but the question is for how long, especially as there are more vaccinations outside the Western world.

“The other side is that consumer spending is going to go away from consumption of containerized goods [and more towards services]. I think we will see more balanced supply and demand sometime in 2022. And in 2023 we could increasingly see more risk to the downside. So, reaping record high profits [from the ship sales] … seems sensible.”