Last weekend, when looking at the latest JPMorgan Prime Brokerage data, we noted that the “pain trade” remains higher as unlike retail, hedge funds have been selling the recent rally aggressively with the largest US bank seeing “net selling in 8 of the past 9 days,” during which stocks have staged a torrid rally.

At the same time, we also observed that the bulk of the recent market meltup has been on the back of a massive short squeeze and covering of puts (creating a delta and gamma squeeze) which makes it especially difficult to predict what happens next as most if not all of the recent market meltup has been due to technicals and positioning, not fundamentals.

We said that “one can conclude that either hedge funds will reverse their selling soon and jump on board the retail buying bandwagon (at which point it will again be time to short), or retail will run out of buying power amid the hedge fund-to-retail “distribution”, and stocks will tumble once again.”

Fast forward one week to today, when… nothing has changed.

In a must-read note from Morgan Stanley Sales and Trading specialist (not for retail distribution just for institutions, and available to ZH pro subs) writes that the sharp reversal higher in the NDX has been brushed off by really everyone as ‘mostly covering’, with ‘some CTA / Systematic buying + Retail’, but ‘nothing real.’ The bank admits that subdued volumes “more or less support this” but it happened nonetheless … and the most ‘real’ part was the narrative shift on the back of it, from ‘Rates shock’ to ‘Growth shock’ (thank you Michael Hartnett) = if the Fed is intent to move quickly and decisively (a Consensus view at this point) then Secular Growth > Cyclical Growth as economic growth slows / falters.

While Morgan Stanley says that that part seems intuitive, “the part that is more confusing is the one where everyone is so sure that every up move needs to be faded.”

At the risk of oversimplifying the situation, we just saw 1Q set up as *the* perfect storm for the doomsday crowd to have their index ‘crash’ scenario play out:

Instead, the S&P is now just a few percent off of the highs and the Nasdaq has climbed double digit % since mid-March!

As the bank asks rhetorically, “what happened to it being bullish when bad things happen but the market doesn’t negatively react (further) or, better, it goes up in the face of it?”, although it quickly adds that “in no way does this imply it’s time to chase any / everything.” Instead, it seems reflective of:

Be that as it may, going back to our original point, the meltup – which continues to be catalyzed on the back of relentless retail buying – remains hated by most institutions, and according to Morgan Stanley’s Prime Brokers, “into every uptick during this latest rally that started in late February, institutional selling has been RELENTLESS.”

One potential culprit – as reported over the weekend – was the ongoing liquidation of Softbank’s “Nasdaq Whale”, the SB Northstar unit which was behind the historic August 2020 meltup in stocks when its management team consisting of former Deutsche Bank traders sparked a marketwide gamma squeeze. Well, in an ironic twist, it may very well be the case that the recent crash in tech stocks was the result of Softbank’s unwind. 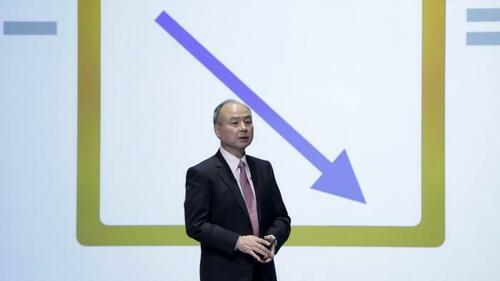 So whether due to frontrunning of Softbank or for any other reason, Morgan Stanley’s Prime Brokers notes that Hedge Funds sold more longs and added to shorts last week, taking net leverage down 3 points to 45% (just the 14th percentile since 2010), or as the bank puts it, “Pure defense… it’s been a combination of consistent long selling in single names (mostly within TMT):” 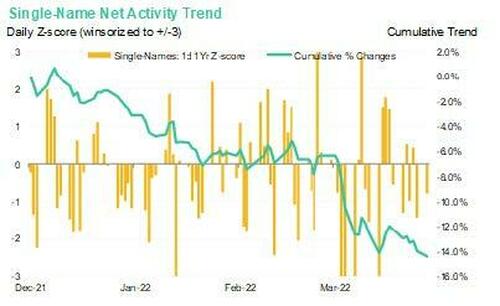 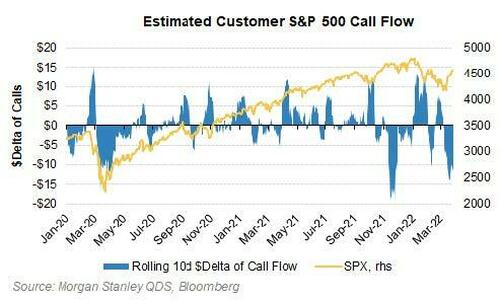 So what happens next, and what can dent this unprecedented skepticism?

According to Morgan Stanley, in the near term, “it feels as though market direction will be determined by forced flows from both the active + more model driven community = given current positioning ‘risk’ still seems skewed higher.”

There is much more in the full note available to pro subscribers.