By Chetan Ahya, Chief Economist and Global Head of Economics at Morgan Stanley

The past two months have seen successive waves of headlines from China, first on the broad regulatory reset and then this week’s focus on property developers facing near-term funding pressures. The policy goals of these measures are first to ensure social stability and second to make economic growth more sustainable by reducing income inequality and addressing imbalances and excesses. However, they have raised concerns about a potential rise in systemic risks and a sharper slowdown in growth.

Investors’ focus has shifted from tech to the property sector, which faces challenges on two fronts. First, property developers are required to adhere to the “three red lines” – maintaining healthy liabilities-to-assets, net gearing and cash-to-short-term debt ratios – which were announced in August 2020.

What we are experiencing now is a direct effect of that regulatory action, which aimed to reduce systemic risks with benchmarks to curb excessive property sector borrowing. In addition, property demand in China has slowed in the last two months, as the front-loading of mortgage lending quotas in the first half of the year has weighed on property sales, increasing headwinds for property developers.

As things stand, most property developers are on track to comply with the three red lines, but a number face challenges in meeting the mandated ratios. Our China property analyst estimates that the total debt exposure of property developers is around Rmb 18.4 trillion, which is now similar to annual sales. This indicates that leverage in aggregate is manageable – hence, so is the deleveraging process.

Nonetheless, the pressure to reduce leverage means that defaults in China’s property sector are likely to increase. From past experience, policy-makers have mechanisms in place to prevent systemic risks. For instance, debt restructuring will take place at the holding company level of property developers in default, while operating companies remain in business and construction projects move forward. Credit committees will oversee this process, with representation from the financial regulators, the central bank and local governments.

Vis-à-vis the banking system, the property risk exposure of China’s banks appears manageable. Development loans totaled 6.9% of banks’ total loan balances, and individual developers’ loan balances are limited to 0.3% of banks’ total loan balance or less. NPL formation has also dropped to multi-year lows in 1H21. In addition, the risks related to peer-to-peer consumer loans and shadow banking credits have largely been addressed over the last three years. Hence, our China financials analyst sees ample room for the domestic banking system to deal with property sector risks this year. The exposure of global investors to the China property sector as holders of the debt or global banks as lenders to the sector is relatively small, which reduces the potential for global systemic risks.

While we expect the restructuring process and immediate spillovers to the financial system to be orderly, we are mindful of potential knock-on effects in the broader economy. Although inventory levels are low, the economy will see some downside pressure from weaker housing starts in the near term. 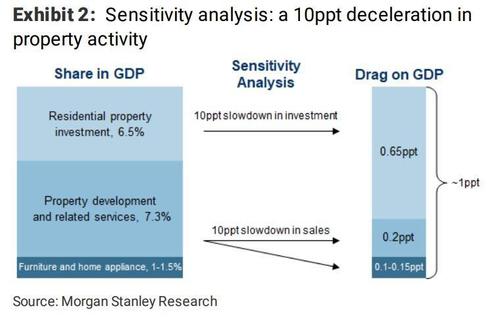 These spillover effects are creating downward pressure on growth at the same time that production cuts to meet energy intensity targets are weighing on growth, the regulatory reset is weighing on corporate sentiment and consumption is softening because of intermittent Covid-related restrictions.

We therefore see a risk that spillovers from the property sector would keep 4Q21 growth below 5% on a 2Y CAGR basis. This is a low starting point relative to next year’s growth target of 5.5%. Moreover, a sharper growth slowdown could increase the risk of a material impact on the labour market, which would run counter to the policy objective of ensuring social stability. It is in this context that we expect policy-makers to manage the process and pace of adjustment while providing meaningful countercyclical easing, just as they did in 2H15, 4Q18 and 2H19. 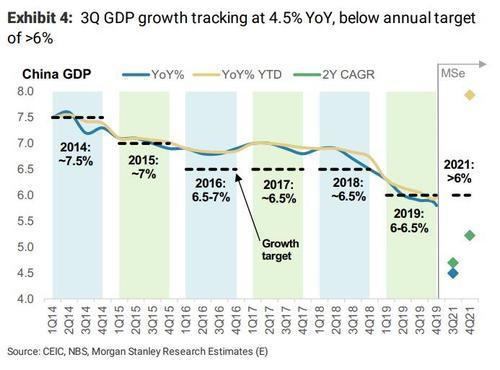 Indeed, we think that we are approaching an inflection point in policy easing. Further measures in the pipeline include: faster fiscal spending to support infrastructure projects in September-December; another 50bp RRR cut in mid-to-late October; some easing of mortgage quotas and fine-tuning of production cuts to meet energy intensity targets in 4Q21; and front-loading of loan quotas and local government special bonds in January-February 2022.

In the coming weeks, we will be watching for (1) communication from policy-makers on the details of the restructuring plan for property developers, and (2) policy easing signals and announcements.