Having apparently seen his book pulled, as backlash builds against Dr. Anthony Fauci – as his ‘untouchableness’ becomes vulnerable amid an avalanche of inflammatory emails suggest the flip-flopping bureaucrat was anything but honest with the American people.

And so, the National Institute of Allergies and Infectious Diseases Director first appearance in public since his emails from the early days of COVID-19 were released to journalists was on MSNBC… of course. 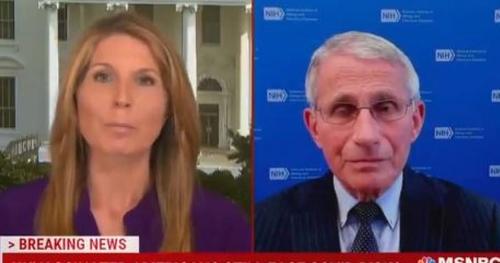 Despite the fact that the emails reflect terribly on Fauci, Nicole Wallace used the first interview with Fauci since the scandal broke to obsequiously genuflect over his behavior.

“I wonder if you feel like you’re still making up some of that lost ground from many months under the last administration from not just no information but disinformation out there,” said Wallace.

Presumably she’s been hiding under a rock for the last 3 weeks as what the media and Fauci once called “disinformation,” the Wuhan lab leak theory, is now having to be treated with seriousness it deserves.

“The true mark of someone is that they look good even when their personal emails come out,” said Wallace, while laughing and smiling at Fauci. “So you pass a test very few of us would pass.”

MSNBC’s @NicolleDWallace scores the first interview w/ Fauci since his emails were made public and uses it to say: “The true mark of someone is if they look good even when their personal emails come out, so you pass the test very few of us would pass.” pic.twitter.com/SNMXBrXm5v

What planet is she living on?

Among other things, Fauci’s emails reveal;

Of course, Wallace asked Fauci about absolutely none of the above.

And the media wonder why they are so reviled.

Wallace’s groveling opinion isn’t apparently shared by White House officials, who are reportedly preparing for Fauci to make a quiet exit in a bid to avoid further fallout from the emails.

Fauci also appeared on MSNBC’s “Morning Joe” this morning, and the adulation continued (with little to no actual journalistic pushback on any of his monologues).

As SaraACarter.com reports, first, Fauci was asked about the purported Wuhan lab leak.

While it is currently being investigated by U.S. officials, back in April of 2020, Fauci was emailing back and forth with National Institute of Health Director Dr. Francis Collins about how it was a “conspiracy theory.”

Now, the Chief Medical Advisor is walking back the email, telling host Willie Geist “we don’t know that for sure.”

Fauci re-admitted that he “can’t guarantee everything that is going on in the Wuhan lab” in the wake of criticism after a trove of his emails were published Tuesday.

But a manmade origin was “low on the list of what we thought the likelihood was.” On Thursday, he asked everyone to “keep an open mind” about COVID-19 origins.

Fauci also appeared on MSNBC’s Deadline Wednesday as his first appearance since the news broke. When asked about his emails then, he tried to look on the bright side.

“There’s no doubt that there are people out there who for one reason or another resent me for what I did in the last administration,” Fauci said.

But, at the very least, his emails were “not anti-Trump at all” he added.

“You look at my emails, I never said anything derogatory about President Donald Trump,” Fauci said.

We give the last word to Naomi Wolf… 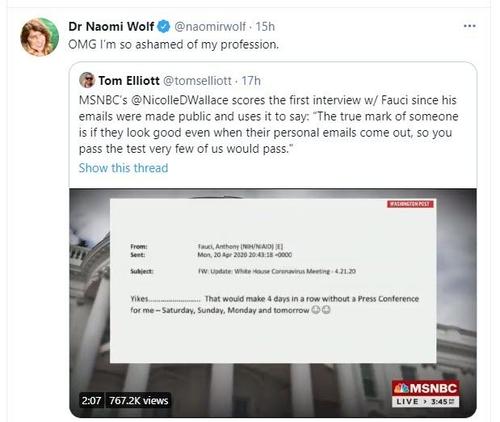 We humbly suggest Dr. Wolf has had many other opportunities in recent years to be “ashamed of [her] profession.”