Authored by Jeff Reynolds via PJMedia.com,

A staggering number of murders and shootings took place in Portland, Oregon, after the death of George Floyd in Minneapolis touched off violent riots across America. Many of the most violent riots occurred in Portland, and with police resources stretched thin, lawlessness increased exponentially across the city. The correlation could not be more clear—after Floyd’s death, the “defund the police” movement sprung up under misplaced motivations of social justice, and many people died unnecessarily. Floyd’s death, over Memorial Day weekend in 2020, created a clear demarcation after which murders and shootings skyrocketed in Portland. 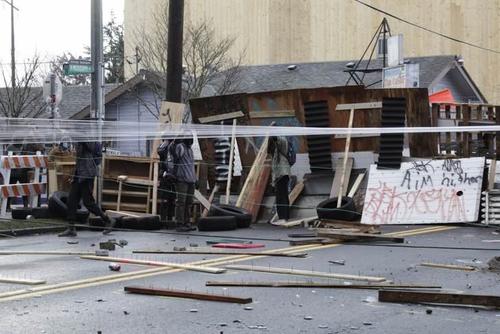 The numbers are truly alarming. From January through April 2020, there were a total of three murders in Portland. Just in January and February 2021, we’ve already seen 20 murders. For the period of June 2020 through February 2021, 71 murders have occurred in Portland. That’s a staggering 255% increase over the same period one year prior.

Shooting statistics tell another grim tale. In the period of June 2020 through February 2021, 870 shootings occurred in Portland. For the same period one year prior, Portland saw 319 shootings. That’s a 173% increase.

This is a crisis that the city of Portland and Multnomah County are not taking seriously.

Kennedy notes that 53 people were murdered through the end of 2020, after Floyd’s death and the subsequent push to defund the police. He told PJ Media, after compiling the numbers:

The lawlessness that Portland experienced this summer directly contributed to the subsequent and dramatic increase in violence—especially homicides. Portland’s political leaders, including Mayor Wheeler and Multnomah County DA Mike Schmidt’s contempt for law and order, disempowered and demoralized the police. The result is chaos and death. Over 50 Portlanders did not have to die but for the rhetoric and actions of local officials caving to the mob and attacking the police.

Law enforcement sources in Portland have repeatedly reported that they cannot respond to all violent crimes when the dual forces of defunding the police force and responding to nightly riots handcuff them. This crisis in police response times was highlighted in September when a home intruder locked a single father out of his home and held his 12-year old son hostage. The father called 911 and did not receive a response for over an hour and a half:

Henry Kirim had ducked out of his Southeast Portland apartment to search his car for a missing bank card when a strange man rushed into his ground-floor unit, closed the door and locked it.

Kirim fumbled for his house key, thankful he had it on the same ring as his car key, and raced to open his apartment door.

The next 10 minutes unfolded in a blur on Aug. 22. The stranger grabbed a kitchen knife. Kirim’s petrified son managed to dart out of the apartment. Kirim followed and started yelling for neighbors to help. When the man eventually fled, several residents gave chase and cornered him nearby.

It took police more than 90 minutes to arrive. Just before an officer finally appeared, the suspect ran off. More than a half-dozen calls had come into 911 over the course of the bizarre ordeal. But that apparently didn’t speed the response.

Maybe that has spurred Mayor Wheeler into action. He asked for a partial restoration of police funding last week, to the tune of $2 million:

The mayor of Portland, Oregon, announced Thursday he would seek $2 million in one-time funding for police, other agencies and outreach programs to try to stem rampant gun violence in the city.

The move by Mayor Ted Wheeler represents an about-face after city leaders in June voted to cut nearly $16 million from the police budget, reductions that included the elimination of a gun violence reduction unit. The cuts came amid racial justice protests following the police killing of George Floyd in Minneapolis.

It remains uncertain if the activists on the city council, such as Jo Ann Hardesty, will go along with the plan to try to rein in the violence in Portland.