Elon Musk was out bright and early on Monday morning updating the market with the company’s latest developments and his prognostications about everything from the macroeconomic landscape to dogecoin at the Qatar Economic Forum.

He first tackled the topic of layoffs at Tesla, as the company is expected to reduce its salaried workforce by about 10% over the next three months, Musk said in an interview with Bloomberg News Editor-In-Chief John Micklethwait this morning.

“Tesla is reducing salaried workforce roughly 10% over the next 3 months or so. We expect to grow our hourly workforce. We grew very fast on the salaried side, grew a little too fast in some areas,” he said.

“A year from now, I think our headcount will be higher both in salaried and hourly,” he said while reaffirming that the company’s current headcount reduction will be 3% to 3.5%.

Tesla has grown to about 100,000 employees, Bloomberg noted on Monday morning. It has been aggressively adding employees while expanding its infrastructure in places like Austin and Berlin. 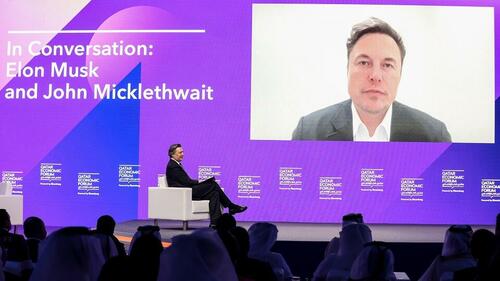 The cuts have mostly involved “human resources representatives and software engineers” so far, the report says.

Recall, we noted days ago that Musk was encouraging all of his employees to return to the office: “Anyone who wishes to do remote work must be in the office for a minimum (and I mean *minimum*) of 40 hours per week or depart Tesla,” Musk wrote in a company email that was leaked last week.

“Remote work is no longer acceptable,” was the name of the email. In it, Musk put his employees to a choice: return to your desks and offices or start finding work elsewhere.

At the Qatar Economic Forum, Musk also made comments about his new role at Twitter, saying he would be behind driving the product, like he is at Tesla. He told Bloomberg there were still several “unresolved matters” regarding Twitter but that he thinks he’ll be able to balance his interests between the two companies.

Musk also made a commitment to support Dogecoin going forward. He also walked back some of his enthusiasm about crypto, stating: “I have never said that people should invest in crypto. In the case of Tesla, SpaceX, myself, we all did buy some Bitcoin, but it’s a small percentage of our total cash assets.”

Finally, focusing on economic outlook, Musk told Bloomberg that he believes a recession in the near term is “more likely than not”.