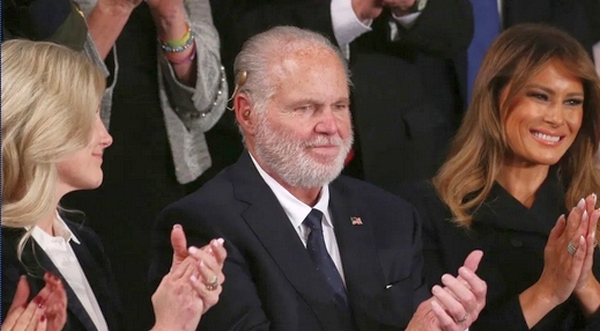 Why am I thinking of Rush?

I always think about Rush this time of year because he told a story about Thanksgiving – each and every Thanksgiving. A beautiful story.

I remember how it came about.

He and I were chatting about ideas for his second book, “See, I Told You So,” published in 1993. You see, I was his writing partner on the future book. One of the things I told him was I was planning to write a chapter titled “Dead White Guys or What Your History Books Never Told You.” In it was a great story about Thanksgiving.

I remember him telling me: “But I don’t know anything about Thanksgiving.”

And I said: “That’s what I’m here for. I envision you reading that story every year on Thanksgiving.”

I miss Rush. I miss his humor, his generosity, his caring, his friendship.

This one’s for you, and for David Limbaugh and Kathryn, whom I never met, and Bo Snerdly. Here goes:

The story of the Pilgrims begins in the early part of the 17th century (that’s the 1600s for those of you in Rio Linda, California). The Church of England under King James I was persecuting anyone and everyone who did not recognize its absolute civil and spiritual authority. Those who challenged ecclesiastical authority and those who believed strongly in freedom of worship were hunted down, imprisoned and sometimes executed for their beliefs.

A group of separatists first fled to Holland and established a community. After 11 years, about 40 of them agreed to make a perilous journey to the New Word, where they would certainly face hardships, but could live and worship God according to the dictates of their own consciences.

On Aug. 1, 1620, the Mayflower set sail. It carried a total of 102 passengers, including 40 Pilgrims, led by William Bradford. On the journey, Bradford set up an agreement, a contract, that established just and equal laws for all members of their new community, irrespective of their religious beliefs. Where did the revolutionary ideas expressed in the Mayflower Compact come from? From the Bible. The Pilgrims were a people completely steeped in the lessons of the Old and New Testaments, They looked to the ancient Israelites for their example. And, because of the biblical precedents set forth in Scripture, they never doubted that their experiment would work.

But this was no pleasure cruise, friends. The journey to the New World was a long and arduous one. And when the Pilgrims landed in New England in November, they found, according to Bradford’s detailed journal, a cold, barren, desolate wilderness. There were no friends to greet them, he wrote. There were no houses to shelter them. There were no inns where they could refresh themselves.

And the sacrifice they had made for freedom was just beginning. During the first winter, half of the Pilgrims – including Bradford’s wife – died of either starvation, sickness, or exposure. When spring finally came, Indians taught the settlers how to plant corn, fish for cod and skin beavers for coats. Life improved for the Pilgrims, but they did not yet prosper! It’s important to understand that this is where modern American history lessons often end. Thanksgiving is actually explained in some textbooks as a holiday for which the Pilgrims gave thanks to the Indians for saving their lives, rather than as a devout expression of gratitude grounded in the tradition of both the Old and New Testaments.

Here is the part that has been omitted: The original contract the Pilgrims had entered into with their merchant-sponsors in London called for everything they produced to come into a common store, and each member of the community was entitled to one common share. All of the land they cleared and houses they built belonged to the community as well.

Bradford, who had become the new governor of the colony, recognized that this form of collectivism was as costly and destructive to the Pilgrims as that first hard winter, which had taken so many lives. He decided to take bold action. Bradford assigned a plot of land to each family to work and manage, thus turning loose the power of the marketplace.

That’s right, long before Karl Marx was even born, the Pilgrims had discovered and experimented with what could only be described as socialism. And what happened? It didn’t work! Surprise, surprise, huh? What Bradford and his community found was that the most creative and industrious people had no incentive to work harder than anyone else, unless they could utilize the power of personal motivation!

But while most of the rest of the world has been experimenting with socialism for well over a hundred years – trying to refine it, perfect it and reinvent it – the Pilgrims decided early on to scrap it permanently. What Bradford wrote about this social experiment should be in every schoolchild’s history lesson. If it were, we might prevent needless suffering in the future.

Do you hear what he was saying, ladies and gentlemen? The Pilgrims found that people could not be expected to do their best work without incentive. So what did Bradford’s community try next? They unharnessed the power of good old free enterprise by invoking the undergirding capitalistic principle of private property. Every family was assigned its own plot of land to work and permitted to market its own crops and products. And what was the result?

“This had very good success,” wrote Bradford, “for it made all hands industrious, so as much more corn was planted than otherwise would have been.” Is it that supply-side economics could have existed before the 1980s? Yes. Read the story of Joseph and Pharaoh in Genesis 41. Following Joseph’s suggestion (Genesis 41:34), Pharaoh reduced the tax on Egyptians to 20 percent during the “seven years of plenty” and “the Earth brought forth in heaps.” (Genesis 41:47).

In no time, the Pilgrims found they had more food than they could eat themselves. So they set up trading posts and exchanged good with the Indians. The profits allowed them to pay off their debts to the merchants in London. And the success and prosperity of the Plymouth settlement attracted more Europeans and began what came to known as the “Great Puritan Migration.”

That was from my book collaboration with the great Rush Limbaugh, circa 1993.

He wrote in the acknowledgments page: “Special thanks to Joseph Farah, a dedicated conservative soul brother from Sacramento, California, who devoted several months to this project. His precise recommendations regarding the structure of the book and advice on how to build upon ‘The Way Things Ought to Be’ provided the guiding force behind the effort and are deeply appreciated.”

Blessed Thanksgiving to all!

Order Rush’s book “Rush Revere and the Brave Pilgrims” at the WND Superstore.