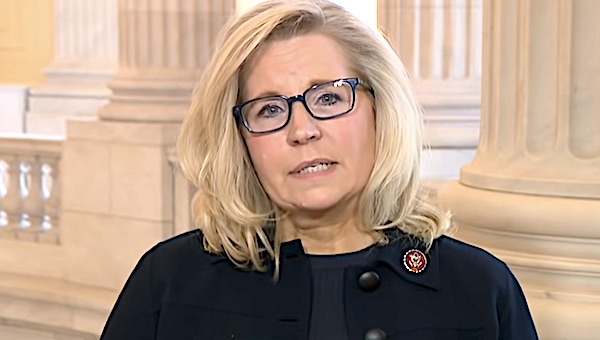 U.S. Rep. Liz Cheney, R-Wyo., one of the handful of Republicans who turned on President Trump during the Democrats second failed impeach-and-remove attempt and voted to remove him, is facing a challenge to a debate over the fraud in the 2020 election.

The challenge comes from Jenna Ellis, one of the lawyers who had worked with President Trump on some of his challenges to state election results, which raised enough suspicions that multiple lawmakers in multiple states brought legal challenges.

The actual evidence in those cases wasn’t reviewed by any court, where judges mostly dismissed the cases on technical grounds, including at the Supreme Court.

But the challenge erupted when Cheney claimed on social media, “The 2020 presidential election was not stolen. Anyone who claims it was is spreading ‘THE BIG LIE,’ turning their back on the rule of law, and poisoning our democratic system.”

That statement followed one from President Trump in which he assigned the moniker, THE BIG LIE, to the 2020 election.

“The Fraudulent President Election of 2020 will be, from this day forth, known as THE BIG LIE!” he said.

The statement came in the form of a news release which was posted on social media by RSBN, as virtually all of the social media companies have banned Trump.

Cheney, who maintained her GOP leadership post in a secret ballot after her opposition to Trump became known, now is facing a primary challenge in Wyoming, where several GOP groups have censured her. She reacted.

The 2020 presidential election was not stolen. Anyone who claims it was is spreading THE BIG LIE, turning their back on the rule of law, and poisoning our democratic system.

Cheney, the No. 3 Republican in the House at this point before the 2022 election, repeatedly has criticized the former president for his concerns about election integrity.

The 2020 election results now are being audited in Arizona, which was just one of half a dozen states where anomalous and unexpected results raised enough concerns that lawmakers questioned whether there was fraud.

Those suspicions were raised by sudden dumps of huge numbers of votes, almost exclusively for Biden, in the dark-of-the-night hours.

What is not in question, however, is that multiple state officials changed state law regarding ballots, without approval from their states’ lawmakers, for the 2020 election.

Election officials in at least six states violated the law in the administration of the 2020 election. That’s called cheating.

If you have the guts to debate me on this, name the time and place.

You know THEY poisoned the system, and R’s were spineless to hold them accountable. https://t.co/7I4nRLyMT8

Ellis pointed that out:

“Election officials in at least six states violated the law in the administration of the 2020 election. That’s called cheating,” she scolded Cheney. “If you have the guts to debate me on this, name the time and place.”

She continued, “You know THEY poisoned the system, and R’s were spineless to hold them accountable.”

The legacy media, in defending Cheney, pointed out the Nazi origins of the “big lie,” and then explained the contemporary version of “the big lie.”

“Soon after a pro-Trump mob attacked the Capitol in an attempt to block Congress from affirming President Joe Biden’s victory, then then-president-elect accused Trump, along with Sens. Josh Hawley, R-Mo., and Ted Cruz, R-Texas, who both led objections to certified state vote totals, of perpetuating ‘the big lie.'”

WND columnist Jack Cashill recently described how Cheney now is “staking out a leadership position in the Cancel Culture Caucus.”

The post 'Name the time and place': Liz Cheney challenged to debate on election fraud appeared first on WND.