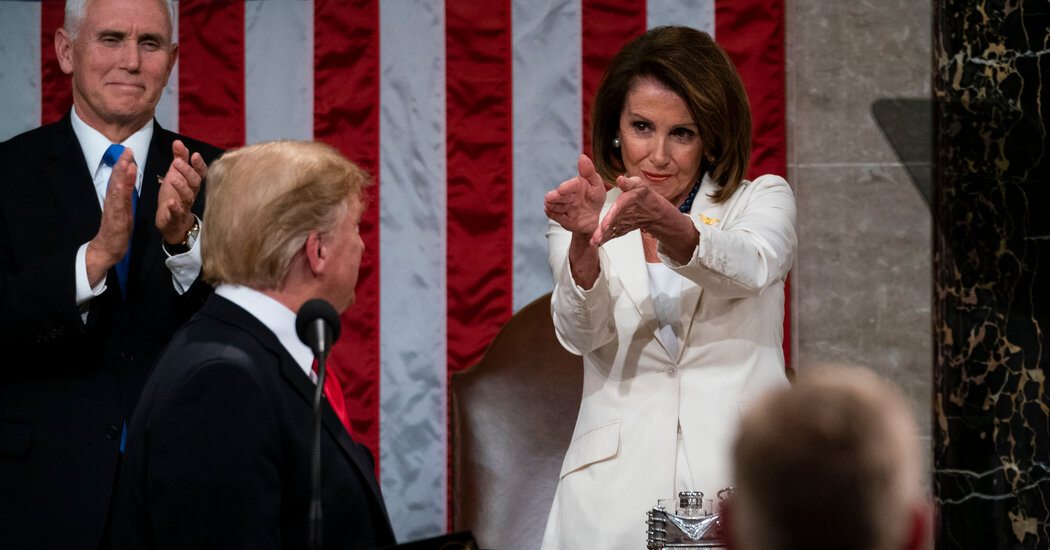 In her two decades leading House Democrats, Speaker Nancy Pelosi of California has been one of the most powerful and iconic women in Washington. When she was sworn in as speaker in 2007, surrounded by the children of members of Congress, she became the first woman to serve in that post. And over the years, Ms. Pelosi was often photographed as the lone woman in rooms full of men, even after the ranks of Congress became more diverse.

Throughout her career, Republicans have vilified her; she is now one of the most threatened members of Congress. She had a particularly toxic relationship with former President Donald J. Trump, and their hostile interactions often drew attention, including when Ms. Pelosi aimed what appeared to be sarcastic applause at him at one of his State of the Union addresses and when she ripped up a copy of his remarks at another.

Here are the most enduring images of Ms. Pelosi during her speakership and what they mean.

At the first State of the Union address that President Trump delivered to a Democratic-controlled House, Ms. Pelosi pointedly applauded as Mr. Trump called to end the “politics of revenge.” She later said that she had not intended the gesture to be “sarcastic” and in fact welcomed his message. But the moment, which went viral, concisely captured the dynamic of their relationship for the next two years.

Ms. Pelosi closely oversaw the impeachment proceedings against Mr. Trump, directing Democrats to move forward with an official inquiry and personally overseeing the vote that sealed him as only the third American president to be impeached.

“The president leaves us no choice but to act because he is trying to corrupt, once again, the election for his own benefit,” she said.

Ms. Pelosi has repeatedly said that no issue drives her as singularly as securing the well-being of the nation’s children — so much so that her rallying cry became “for the children.” When she was first elected speaker, Ms. Pelosi invited the children and grandchildren of lawmakers to join her at the rostrum to underscore the point. She repeated the move again in 2019 when she won the speaker’s gavel a second time.

The Aftermath of the 2022 Midterm Elections

A moment of reflection. In the aftermath of the midterms, Democrats and Republicans face key questions about the future of their parties. With the House and Senate now decided, here’s where things stand:

A new era for House Democrats. Speaker Nancy Pelosi, the first woman to serve in the post and the face of House Democrats for two decades, will not pursue a leadership post in the next Congress. A new and younger trio of leaders is poised to take over their caucus’s top ranks.

Divided government. What does a Republican-controlled House and a Democratic-run Senate mean for the next two years? Most likely a return to the gridlock and brinkmanship that have defined a divided federal government in recent years.

Ms. Pelosi herself raised five children before entering politics, a chapter she credits with teaching her everything she needed to know about how to herd and hound politicians. She alluded to that history on Thursday as she announced that she would step down from leadership.

When she first visited the House floor at age 6, she said, “never would I have thought that someday I would go from homemaker to House speaker.”

As Mr. Trump finished his State of the Union address in 2020, Ms. Pelosi, clad in a white pantsuit that evoked the women’s suffrage movement, stood stone-faced, and ripped her copy of his speech in half, tossing the remnants on the rostrum.

The move apparently outraged Mr. Trump, but she later told Democratic lawmakers in a closed-door meeting that she felt “very liberated” by the act. If anyone had done any shredding, she told them, it was Mr. Trump, who “shred the truth right in front of us.”

Ms. Pelosi later said she kept the shreds of the speech.

Trouble From the Left

Tensions between Ms. Pelosi and young progressive Democrats elected in 2018 like Representative Alexandria Ocasio-Cortez of New York simmered and sometimes boiled over, as the group of liberal women of color known as “the Squad” pressed for her to take more aggressive ideological stances and the long-serving speaker questioned their effectiveness.

Weeks after Democrats won control of the House in the 2018 midterms, Ms. Pelosi and Senator Chuck Schumer of New York, then the minority leader, sat down with Mr. Trump at the White House, in a meeting that quickly turned into a televised contest of wills.

“Mr. President,” she said at one point as Mr. Trump tried to undercut her, “please don’t characterize the strength that I bring.”

In the end, Ms. Pelosi emerged triumphant, sliding on sunglasses as she strode out of the White House in a rust-colored coat. The picture was shared so widely online that the maker of her outerwear reissued it.

Clashes between Ms. Pelosi and Mr. Trump at the White House became something of a routine during the two years in which she served as speaker, and he as president. After a contentious meeting on Syria in 2019, Mr. Trump tweeted an image captured by a White House photographer showing Ms. Pelosi, at a long conference table surrounded almost entirely by men, standing and wagging her finger at him.

Ms. Pelosi, who has made challenging China on human rights a signature issue in her congressional career, was criticized for a trip to Taiwan last summer, which she made despite warnings from the Biden administration not to risk provoking Beijing.

Without Ms. Pelosi, one of former President Barack Obama’s defining achievements, the passage of the Affordable Care Act, might have never become law.

With arm-twisting and tactical savvy, Ms. Pelosi was able to muster enough support in her divided caucus to pass the legislation, a feat that brought about a historic drop in the number of Americans without health insurance. About 35 million people have gained coverage under the Affordable Care Act and the expansion of Medicaid.

Attack on the Capitol and Trump’s Second Impeachment

After pro-Trump rioters stormed the Capitol on Jan. 6, 2021, Ms. Pelosi quickly worked with congressional leaders to secure the building so lawmakers could return and affirm President Biden’s victory — and then she moved to impeach Mr. Trump.

In a later interview, Ms. Pelosi joked that she would have fended off the rioters with her trademark 4-inch stiletto heels, a mainstay of her wardrobe.

“Well, I’m pretty tough,” she told USA Today. “I’m a street fighter. They would have had a battle on their hands.”