The huge development out of the Madrid NATO summit yesterday was Turkish President Recep Tayyip Erdogan dropping his veto over Finland and Sweden’s application for membership, unveiled in a joint communique issued by the three countries. Still, this major development hasn’t been much of a high priority for mainstream media coverage. 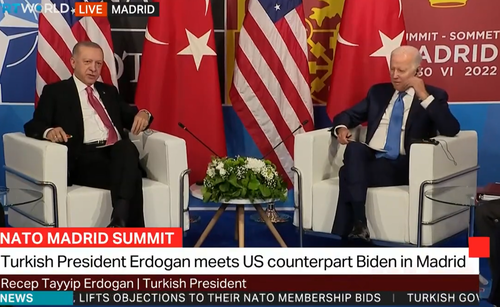 It continued: “In any accession to the Alliance, it is of vital importance that the legitimate security concerns of all Allies are properly addressed. We welcome the conclusion of the trilateral memorandum between Turkiye, Finland, and Sweden to that effect.”

At the same time, the declaration stressed that it said that it “warmly” welcomes Ukrainian President Volodymyr Zelensky’s participation in the summit “in full solidarity” with Ukraine.

While not mentioning Russia’s ‘red line’ issue of future potential Ukraine membership in the Western military alliance, the statement still spelled out that NATO “fully supports” Ukraine’s “inherent right to self-defense and to choose its own security arrangements.”

But within the document, there are “partner” countries named which is sure to be seen as immensely provocative in Moscow, particularly the invocation of the names Georgia and Moldova:

“In light of the changed security environment in Europe, we have decided on new measures to step up tailored political and practical support to partners, including Bosnia and Herzegovina, Georgia, and the Republic of Moldova. We will work with them to build their integrity and resilience, develop capabilities, and uphold their political independence,” the NATO statement said.

Also on Wednesday NATO labeled Russia the most “direct threat” facing the alliance today, and vowed to take further steps at modernizing Ukraine’s military. The alliance statement said Russia is the “most significant and direct threat to the allies’ security and stability.”

President Biden at the summit also announced a beefed up and permanent US military presence in Eastern Europe, namely in Poland. Additionally, “New US warships will go to Spain, fighter jet squadrons to Britain, ground troops to Romania, air defense units to Germany and Italy and a wide range of assets to the Baltics,” according to Biden’s announcement featured in Reuters.

Türkiye’s President Erdogan met with US President Biden and the UK’s PM, Johnson, on the sidelines of a NATO family photo session in Madrid, Spain pic.twitter.com/JbLkhpITq5

Biden on Wednesday met with Turkish President Recep Erdogan, wherein he thanked the Turkish leader for backing Finland and Sweden’s NATO bids, after serious concessions were made regarding the Scandinavian countries willing to brand the Kurdish PKK a “terrorists organization”.

Look at me as Biden and Erdogan look at each other with love pic.twitter.com/Qrwp2egt9c