The COVID-19 pandemic severely disrupted people’s mobility worldwide, but it didn’t stop them from wanting to move. In fact, Gallup surveys show that in the second year of the pandemic, people’s desire to migrate reached its highest point in a decade. 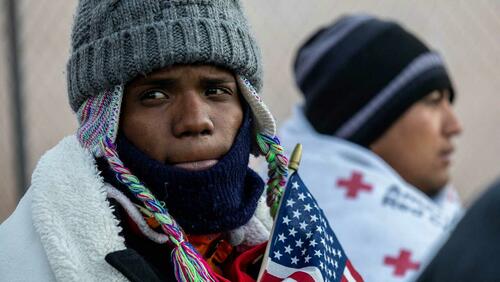 In 2021, 16% of adults worldwide — which projects to almost 900 million people — said they would like to leave their own country permanently, if they could. 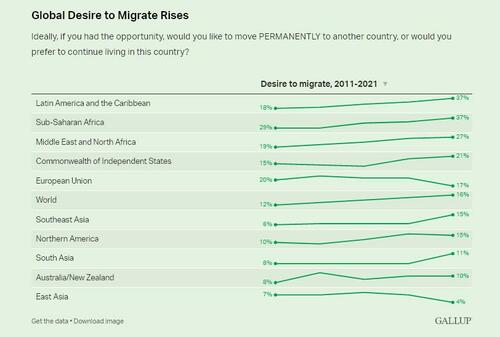 Gallup’s latest update on adults’ desire to move to another country is its first global estimate available since 2018. The 2021 figures are based on interviews with nearly 127,000 adults in 122 countries.

The analysis period coincides with the slow reopening of the world in 2021 after international migration growth dropped by as much as 27% from mid-2019 to mid-2020, according to United Nations estimates. In the 38 wealthy countries that make up the Organization for Economic Cooperation and Development (OECD), migration dropped by more than 30% in 2020 — the lowest level observed since 2003.

While there are signs that migrant flows are continuing to rebound from their 2020 levels, particularly across the OECD, in many parts of the world, people’s desire is higher than it has been in a decade.

Desire to migrate rose to decade-high levels in regions that are already well-known for sending migrants, such as Latin America and the Caribbean, sub-Saharan Africa, Southeast Asia, South Asia, and the Commonwealth of Independent States.

However, this was not the case in all parts of the world. After almost a decade of stability, aspirations to migrate fell to decade lows in both the European Union and East Asia — largely thanks to significant declines in countries such as France and Germany in the EU and South Korea and China in East Asia.

In 13 countries, about half or more of the adult population would like to move to another country if they had the chance. These countries represent nearly every region of the world — except for Northern America and the EU. Many of these countries have consistently shown up on this list year after year.

Lebanon made this list for the first time in 2021 after people’s desire to migrate skyrocketed from 26% in 2018 to 63% amid the country’s economic and political crisis. 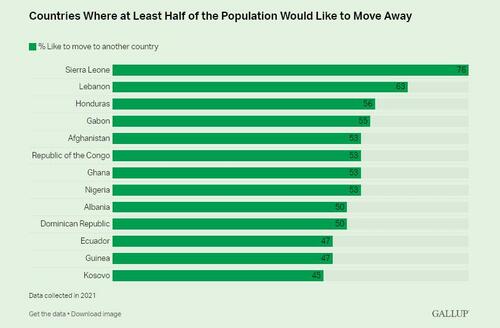 The list of countries where potential migrants say they would like to move — if they could — has generally been the same since Gallup started tracking these data in 2007, with the U.S. topping the list of the most desired destinations every year.

This was true in 2021 as well. Just under one in five potential migrants (18%) — or about 160 million adults worldwide — named the U.S. as their desired future residence. However, this figure is down from where it was in all years leading up to 2017, which suggests that policy changes and anti-immigrant rhetoric during the Trump administration likely had a lasting chilling effect on potential migrants’ desire to come to the country.

As potential migrants cooled toward the U.S., and actual migration levels to the country slumped, they warmed to its neighbor to the north. In 2021, Canada achieved its highest level of immigration in its history. And Gallup survey figures show that 8% of potential migrants — or about 74 million people worldwide — would like to relocate to Canada. 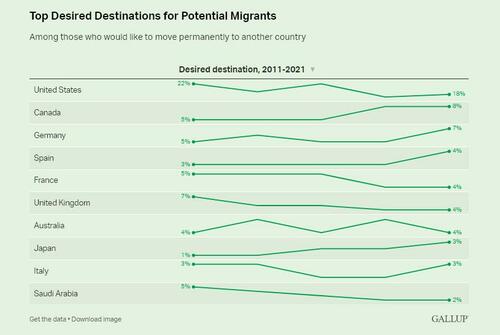 While the increase in the desire to migrate may set off alarms among those who are happy that the pandemic curtailed global migration, it’s important to note that Gallup typically finds that the percentage of those who have plans to move is much lower than the percentage who would like to move. Desire to migrate is not the same as intent to move. Not everyone who wants to move can move, or ever will.

Gallup’s data suggest the COVID-19 pandemic did not dampen people’s desire to move — which is likely an important factor in why migration has been able to rebound so quickly in many places, including in countries such as the U.S. From 2021 to 2022, net international migration exceeded 1 million residents, suggesting that migration patterns may be returning to their pre-pandemic norms.

Further, countries such as Canada are banking on people’s increased desire to come to their country. Canada’s government announced plans late last year to take in nearly 1.5 million more migrants by 2025 to offset its aging population and ease labor shortages.

In the coming months, Gallup will be updating these metrics from our global surveys in 2022.