Recent earnings reports from streaming giant Netflix had been a veritable rollercoaster horrorshow: the stock soared to an all time high two years ago when Netflix reported a blowout subscriber beat and projected it would soon be cash flow positive – if only briefly before again reversing and then tumbling seven quarters ago when Netflix again disappointed after it reported a huge subscriber miss and giving dismal guidance, leading to the second quarter when Netflix slumped again after the company missed estimates and guided lower. This again reversed five quarters ago when Netflix soared after it blew away expectations and guided to a blowout Q4, only to plummet one year ago when the company’s stock crashed after NFLX reported a dismal subscriber miss for Q4 and gave horrific guidance for the current quarter. Then three quarters ago, the stock absolutely imploded, plummeting 20% in seconds after the company reported the loss of 2 million subs in Q2 and forecast catastrophic earnings. Then two quarters ago, when there was almost no more muscle to cut, the stock finally jumped after reporting a smaller than expected subscriber loss. The upside trend continued last quarter when NFLX again surged when the company reported solid subscriber growth for Q3 with a forecast that topped expectations.

In short, after the shares tumbled on 4 of the past 8 earnings releases, and obviously surged on the other 4, it’s been a dizzying rollercoaster, with the shares losing almost 50% of their value since the start of 2022 – one of the most oversold tech stocks of the past year – yet up almost 100% from its June 2022 lows.

Heading into today’s earnings, Citigroup analyst Jason Bazinet said the focus will be on fourth-quarter subscribers, the forecast for first-quarter revenue, the profit outlook, and any commentary regarding the new cheaper ad-supported tier that started during the quarter. In a note to clients, he said the ad-supported tier was only offered in 12 markets and “likely had a slow start” but will help lift the shares over time.  In a sign of how seriously Netflix is taking the advertising opportunity, the company said Wednesday it is expanding its relationship with Nielsen, the long-time leader in TV ratings. Coincidentally, Nielsen reported its latest streaming data on Thursday morning. Netflix had a 7.5% share of the overall time people spent watching TV in December, larger than all other streamers but YouTube. Netflix remains the dominant player by other measures, though, accounting for seven of the 10 most-watched shows on streaming in mid-December.

Meanwhile, Wells Fargo analyst Steven Cahall said Netflix’s comments about cracking down on password sharing will be the big focus of today’s earnings call. “As the Street better understands password sharing we see it as upside to revenue growth estimates,” he said in a note to clients Wednesday.

Bloomberg Intelligence analyst Geetha Ranganathan had a bullish take, saying that things are finally falling in place for Netflix, as a solid content slate that included hits like Wednesday and Glass Onion could help it easily meet and possibly exceed guidance for 4.5 million more subscribers in the fourth quarter: “Though investors will be looking for color on the adoption of its ad-supported tier, which debuted in November, we expect this to be a slow build that will eventually boost average revenue per user and revenue through 2023, especially when combined with a crackdown on password sharing.”

Analysts at MoffettNathanson had a more bearish view warning that Netflix has “hit subscriber maturity” in the US, Canada and Western Europe, and it now faces “a number of strategic challenges that cloud future earnings and cash-flow growth prospects.” Among them, they said, are creating an option with ads that creates an attractive price point for consumers to sign up without creating “a high degree of spin-down behavior,” meaning subscribers switching from high price ad-free tiers to lower ad-included price tiers.

So with all that in mind, here are the details from the fourth quarter letter with news hitting moments before the results that CEO Reed Hastings is stepping down as CEO:

But while the financials were ok, it was the blowout number of subscriber adds that blew away expectations, and that everyone is focusing on: 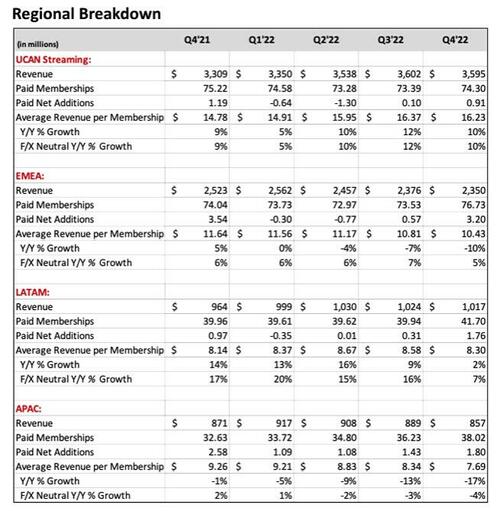 The good news: after two quarter of subscriber declines, the company is now seeing two consecutive quarters of sharp subscriber growth. That said, Netflix admitted that “2022 was a tough year, with a bumpy start but a brighter finish.” It adds that “we believe we have a clear path to re-accelerate our revenue growth: continuing to improve all aspects of Netflix, launching paid sharing and building our ads offering.” 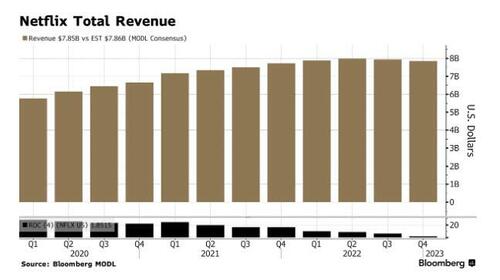 Predictably, the company wasted no time to pat itself on the back for its solid Q4 results:

“Q4’22 revenue, operating profit and membership growth exceeded our forecast – we continue to lead the industry in streaming engagement, revenue and profit. Our Q4 content slate outperformed even our high expectations: Wednesday was our third most popular series ever, Harry & Meghan our second most popular documentary series, Troll our most popular non-English film, and Glass Onion: A Knives Out Mystery our fourth most popular film .

We delivered on the high end of our operating profit margin target for full year 2022, and we expect to increase our operating margin in 2023 vs. 2022.

Addressing the elephant in the room – its new, lower-priced ad-supported plan which launched in November – Netflix said “we are pleased with our progress to date across every dimension” adding that the lower price point is “driving incremental membership growth,” and it’s seen “very little switching” from other plans. But Netflix also warns that revenue and profit growth from the new initiative this year “will be modest given that this will build slowly over time.”

Looking ahead, Netflix no longer predicts its subscriber growth for future quarters instead focusing purely on financial metrics which for Q1 are largely in line with consensus:

As we noted in our Q3’22 shareholder letter, revenue is our primary top line metric, particularly as we develop additional revenue streams where membership is just one component of our growth (like advertising and paid sharing). The quarterly guidance we provide is our actual internal forecast at the time we report. As always, we strive for accuracy although the rollout of major new initiatives (paid sharing and ads) plus current uncertain macroeconomic environment leads to less-than-normal visibility.

We forecast Q1’23 revenue growth of 4% (8% on a F/X neutral basis). We expect our F/X neutral revenue growth to be driven by a combination of year over year growth in average paid memberships and ARM. This translates into modest positive paid net adds in Q1 ‘23 (vs. paid net adds of -0.2M in Q1’22). Our expectation of fewer paid net adds in Q1’23 vs. Q4’22 is consistent with normal seasonality and factors in our strong member growth in Q4’22, which likely pulled forward some growth from Q1’23.

In addition, we expect to roll out paid sharing more broadly later in Q1’23 (more details below in the Product and Pricing section). We anticipate that this will result in a very different quarterly paid net adds pattern in 2023, with paid net adds likely to be greater in Q2’23 than in Q1’23. From our experience in Latin America, we expect some cancel reaction in each market when we roll out paid sharing, which impacts near term member growth. But as borrower households begin to activate their own standalone accounts and extra member accounts are added, we expect to see improved overall revenue, which is our goal with all plan and pricing changes 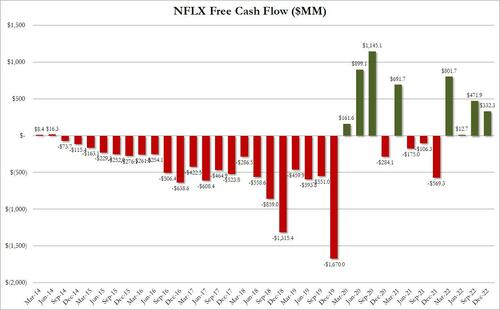 The company says that “Now that we are a decade into our original programming initiative and have successfully scaled it, we are past the most cash intensive phase of this buildout. As a result, we believe we will now be generating sustained, positive annual free cash flow going forward. Assuming no material swings in F/X, we expect at least $3B of FCF for the full year 2023.“

Turning to the cap table, the company’s debt at quarter end totaled $14B; with cash and short term investments of $6B, net debt totaled $8B, or 1.3x LTM EBITDA. There are no scheduled debt 7 maturities in FY23 and only $400M of debt maturities in FY24 (all of our debt is fixed rate).

As noted above, NFLX says that its capital structure policy is unchanged, and the “first priority for our cash is to reinvest in our core business and to fund new opportunities like gaming, followed by selective acquisitions.” NFLX is targeting maintaining minimum cash equivalent to roughly two months of revenue (e.g., about $5.2B based on Q4 revenue).

After meeting those needs, NFLX intend to return cash to stockholders through share repurchases, and assuming no material acquisitions, it anticipates resuming our share buyback program in 2023.

Here is our buyback math: NFLX plans on keeping a minimum cash equivalent to 2 months of revenue ($5.2B based on Q4 revenue). It currently has $6BN in cash, so it will buy back ~$1BN in stock. For 2023 it plans on generating  another $3BN in cash, so up to ~$4BN in buybacks.

Besides Q4 earnings, the company also reported the very material news that the company’s founder, Reed Hastings, is stepping down as chief executive in a shake-up at the top of one of the most powerful studios in Hollywood. Hastings, who launched Netflix in 1997 as a DVD-by-mail service, wrote in a blog post that he has been increasingly delegating management in recent years. Now is “the right time to complete my succession”, he added. He will stay on as the company’s executive chairman.

The change comes as Netflix has lost more than a third of its market value in the past year, after revealing its decade-long growth spurt had come to an end. Sarandos and Peters will be charged with regaining momentum and leading Netflix through a more austere era for the entertainment industry.

As Bloomberg notes, Reed Hastings stepping aside as CEO is not an entirely unexpected event. And he notes in his blog post he’s not leaving entirely. He promoted Ted Sarandos to co-CEO and Greg Peters to COO 2 1/2 years ago. The three of them have worked together for 15 years.

“We’ve all learned how to bring out the best in each other,” Hastings wrote. “I look forward to working with them in this for many years to come.”

“Our board has been discussing succession planning for many years (even founders need to evolve!)”, Hastings, 62, wrote. “I’m so proud of our first 25 years, and so excited about our next quarter of a century”

“4Q has traditionally been a strong quarter for them, and what they’ve done really really well in terms of execution in the third quarter and the fourth quarter was a steady cadence of content hits… What this tells investors is that they have a steady pipeline of more and more hits, and more and more predictable hits. Not just a sleeper every once in a while. That gives us confidence that they should be able to monetize that, whether it’s through pay sharing, whether it’s through the ad-supported tier and other efforts.”

The market clearly agrees and while the stock initially dumped as much as 4% on news of the Hasting resignation, it has since spiked as much as 8% and was settling about 6% higher around 5pm ET ahead of the conference call. 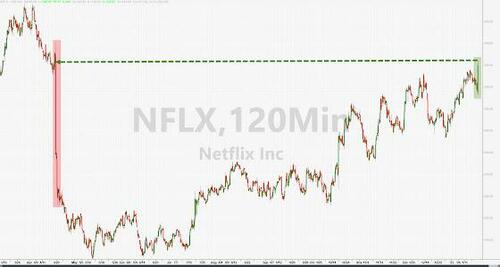